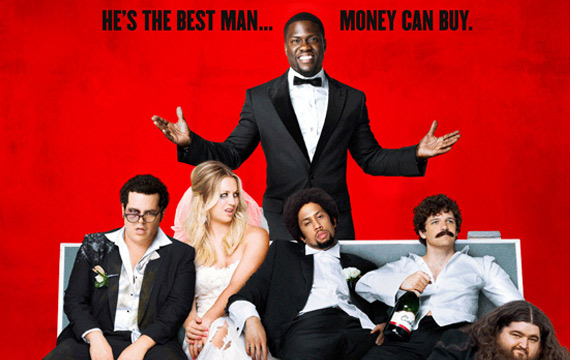 Unless you’ve been living under a rock, you’ve at least heard of The Wedding Ringer, a new comedy produced by Will Packer (Think Like a Man, Ride Along and No Good Deed) and starring Kevin Hart and Josh Gad. FanBolt recently had an opportunity to check out the movie, as well as speak to Will Packer himself, along with one of the film’s talented stars, comedian Affion Crockett.

The film, in theaters now, follows Kevin Hart’s character Jimmy Callahan, who runs a business as a best-man-for-hire for lonely grooms. His most recent client Doug Harris (adorably played by Josh Gad) hasn’t had the heart to tell his type-A personality fiancée Gretchen (Big Bang Theory‘s Kaley Cuoco) that he’s one of the aforementioned lonely grooms. So Doug finds Jimmy and this is where the adventure begins. Affion Crockett co-stars in the movie as one of Jimmy’s buddies and groomsmen-for-hire Reggie (aka Drysdale), and we were fortunate enough to chat with both of them about this laugh-out-loud funny film.

I had the pleasure of viewing the film earlier in the week and I’ll say… if you want to watch a movie that will keep the laughs coming, this is one to add to your list.

One thing that you can tell while watching the film is that the actors involved had fun on-set, and it’s probably because there were no egos or competitions involved. “This is one of the funnest sets I’ve been on, where we had the most camaraderie with a bunch of comedians,” Affion shared. “I came from Wild ‘n Out. I will tell you first-hand there was nothing but competition, and ‘I gotta out-do this person’ or ‘I gotta make sure I’m seen.’ I didn’t feel that way at all with these guys… The mission of what the script wants us to do, pull off this fake wedding, was the goal and as actors we all came together with that mission in mind.”

Now some people will look at the movie’s poster and trailer and automatically classify it as a ‘black film.’ The production company backing it is run by a black man, the headlining star is a black man and there are a decent amount of black co-stars – which is enough for many to place it in the black category. “I don’t see this as a black film. At all,” stated Packer. “With this film, it’s interesting because I kind of always throw the question back like ‘Well is it a black film because Kevin Hart’s black? Or because Affion’s in it? How many black people does it take to make a black film? Two and a half? Am I over the limit?’ I think it’s a universal theme, but I would argue that No Good Deed with Taraji and even Think Like a Man were universal themes and they have black people in them. So I think that the label sometimes can hold us as filmmakers back. Yes, it’s certainly a challenge to get any film made and if it’s a film that’s perceived to be for a particular niche demo, then that can make it even more difficult sometimes.”

Affion agreed, telling us, “Just because Kevin’s the lead in it, or I’m in it or Corey Holcomb’s in it doesn’t make it a black movie. It’s a funny movie with different races of actors in it.”

Will has a lot of successful film experience under his belt, so it’s only natural that he’d set his sights on taking over the world of television as well. He’s producing an Uncle Buck series for ABC, sold #PeopleAreTalking over at NBC and most recently began working with the network developing an autobiographical comedy series, Like Father, Like Son. The man is busy, y’all and he had this to say about his upcoming television ventures. “This is the season where we find out what gets picked up and what’s going to be shot as a pilot so we don’t want to jinx anything because I’m in the middle of it right now. I’m on the phone with the network presidents in between [filming], talking to my writers. It’s a very exhaustive process, arduous process, but my hope is that I will get my first Will Packer production on television this fall.” Will is also a fan of our little Atlanta (he lives here and a number of his films have shot around town) and it sounds like once he gets a TV show picked up, it could be heading here to shoot! “I want to bring more project to Atlanta, be they TV or film, I’m excited about his market. It’s obviously my home market but it’s also established itself as a major major player in Hollywood.”

Sounds good to us!

For the fans who like to jump the gun a little and may already be wondering about a sequel (it’s ok!), Affion made it VERY clear where he stood on that.”When the box office numbers come in this weekend ABSOLUTELY there’s going to be a sequel, and then there’s going to be a third part because you guys are going to support this movie. It’s going to be Will Packer’s second hundred million dollar-plus movie at the box office, but it’s only dependant on you guys going TO SUPPORT THE MOVIE THIS FRIDAY AND SATURDAY the 16th and 17th. MLK Weekend. You will have 5 parts of The Wedding Ringer if you guys do what y’all are supposed to do for Will Packer Productions.”

We knew he was serious when he (hilariously) got all up in our mics faces to make that speech.

When you see the film (and I say when because how could you not after the above speech?) you’ll see all of Doug’s fake groomsmen practicing their PTD’s (Party Trick Discraction). These special talents that are reserved as a quick way of getting out of the awkward moments the guys inevitably get themselves. “I would say Will’s would probably be switching hats,” Affion laughed. “He’d be like ‘Oh, look over there!’ then he’d have a whole new hat on. Will is the hat man. Mine would be some sort of dance move. I also like to hug women…. I might be telling too much, but I’m a very passionate hugger.”

Finally, since Will is an Atlanta-lover we made sure to ask him our favorite questions to pose to celebs… where he likes to eat! (Yeah, we love food…and?!) “Cesar’s 52 is great, kind of all-American dining. Rathbun’s is great. I’m not a huge steak eater. Lobster Bar, I enjoy. I’m in the Buckhead area a lot to that’s where I go. You know what? Spondivits, out by the airport…It’s a great seafood restaurant with wood tables and TV screens all over the place and it’s right by the airport so if I’m either coming in from a flight I’ll swing through there on my way home or if I’ve got time on the way to the airport. It’s great! Fresh seafood, but not stuffy.”

Make sure you go check out The Wedding Ringer, starring Kevin Hart and Josh Gad, in theaters now!

Fans Petition Against Scarlett Johansson's 'Ghost in the Shell' Casting