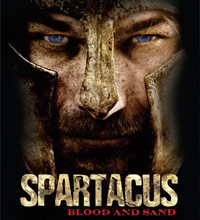 We had the pleasure of chatting with ‘Spartacus’ executive producers Steven S. DeKnight and Robert Tapert about their new project which premieres this month on Starz. Check it out below!

Is there a connection to Stanley Kubrick’s “Spartacus” movie in terms of story?

Steven S. DeKnight: We have a prosthetic penis called the Kirk Douglas. Yes we do. It’s Spartacus, so it’s been told several different times. Rob and I both love the movie. I know Kubrick was a little cool on it himself. I remember when I saw it as a kid and just loved it, loved that world. Once we started digging into it, the big surprise for me was how little is known about Spartacus. Especially his history before he broke out and started making trouble for the Romans. There’s literally a page and a half of stuff you can read, and it’s just scraps. It’s fragments from different historians. Most of them a 100 years later to 200 years later. His true history is just a complete mystery to everybody. It really gave a chance to dig into that storyline.

Once we get to the point that everyone knows from the Kubrick movie, there is still a ton of material and anecdotes about this ongoing war for like a year and half and how it built up. When they first escaped, they didn’t escape to make a statement about slavery or bring down the Roman Republic. They just wanted to get the hell out of there. Then it just snowballed to the point of almost getting to the gates of Rome. It’s going to be as Lucy said, something that we all believe greatly in. As a piece of entertainment and it rises above most of what’s out there.

Speaking of Lucy, Rob called me up at the office the other day, and said Steven what you think about my wife as Lacretia? I said I was thinking exactly the same thing, I just didn’t know quite how to approach it. From the start when I created that character, I thought she would be perfect for the role. She was perfect for the role, and she just knocks it out.

Since this airs on a premium channel, and it is set back in a time when sexuality was a lot more open. Are you going to explore that?

Rob Tapert: Oh brother are we. We’ve had things that you wouldn’t even imagine. The guys at Starz have invited us to push the borders. Steven alluded to it in the panel. They called the director of episode 6, and said we feel that you guys can go further sexually. He said alright, I’m going to do that. So, there’s a ladle scene, and I’m going to leave it at that. When the writers saw the dailies of that, we could not believe what we were seeing. It shocked us.

Will ‘Spartacus’ fill the gap left by the ‘Rome’ series?

Rob Tapert: This is different from ‘Rome’. It never has the financial resources that ‘Rome’ had. I would say if you liked ‘Rome’, then you’ll like this.

Steven S. DeKnight: I loved ‘Rome’. One of my favorite scenes was the mini gladiator fight. That’s basically… comparing ourselves to ‘Rome’, that scene is our show.

Can you talk a little bit about the female characters in the show?

Steven S. DeKnight: Actually, behind the scenes, they had a lot of power. Lacretia [Lawless] is very powerful in the series. Lithia is also a force to be reckoned with. I come from the Joss Wheddon world, so I love strong female characters. All of our female characters have that strong streak in them. Spartacus’s wife, Erin Cummings, she gets to hack up barbarians. Hopefully in the future we will have a gladiatrix. The one main reference that we found about the gladiatrix was like a sideshow kind of thing. It was a gladiatrix that was fighting 6 midgets. As the series goes on, it’s an all male thing in our world for the gladiators. As they break out and the army grows, we will definitely have women fighting, strong women.

Do you have an on staff historian?

Steven S. DeKnight: Yes we do. We have two great historical consultants. I send them the scripts, and they send me pages of stuff. The great thing about them is if I send them a question, I get a three-page answer with more information than I would ever need. They’ve been really great not only helping us check our facts, but also they’ll say something that generates storylines. They’re very useful.

Rob Tapert: Then there are things that we just say, “I don’t care.”

Is there any comic relief to go with the violence?

Steven S. DeKnight: Not so much comic relief, but there is humor. It’s just not like comedy humor. I always use the ‘Raiders of the Last Ark’ analogy. Any kind of humor will come out of the character. We’re not saying punch lines, we’re not saying jokes… It’s a brutal brutal world. There are lighter moments, but not true comedy.

Is there an “I am Spartacus” scene? It’s such an iconic moment.

Steven S. DeKnight: We certainly do, but not what you would expect. We often say we take the Spartacus legend, we turn it on its side, and we beat the crap out of it. It is bloody and brutal. This was a very brutal time. The Romans had a completely different view of violence than we do. They were brought up that flinching away from blood and violence was a sign of weakness. The violence and daily life are very common.

Other than the historical aspects of the show, what else are you looking forward to writing about to make it your own?

Steven S. DeKnight: One thing we spoke about was that we didn’t want Spartacus to be perfect. The Kirk Douglas Spartacus, and I love his performance, but he is perfect from the start when he try’s to stop a slave from being whipped, and he bites that guy on the ankle. He’s already standing up for the little guy. This Spartacus, he’s on a different mission. He wants his wife back. Everybody else is pretty much collateral damage. He’s a man that learns to be a leader. We want a flawed character. He takes some missteps in our series that will have the audience saying, “No don’t do that”. He’s not a golden boy.

Rob Tapert: There are steps on network television he could not do.

How did you cast Spartacus?

Steven S. DeKnight – we saw the tape of Andy, and then by God, much to Andy’s credit, we beat the bushes to find anybody. We didn’t want to leave one rock unturned. It was down to the wire, but we kept coming back to Andy. I remember when he first walked in the room. I said oh my God, this guy looks like what I would have imagined Spartacus to look like. He just proved to be a major talent. I’ve been so impressed with his work. He’s iconic.

Rob Tapert: I already call him the next James Bond. He’s Welsh.

Does the show keep it pretty balanced when providing eye candy?

Steven S. DeKnight: This would go the other way. I would argue that there’s more eye candy for the women than there is for the men.

When showing sexual material, is it more difficult to show male nudity?

Rob Tapert: We’ve had no issues with that. We have a serious solid gay guy relationship that’s portrayed in a very serious manner. Like any other relationship. We’ve taken a lot of eye candy and infused it with heart and emotion. I think that’s the strength of the series.

Steven S. DeKnight: What I love about the relationship Rob is talking about is that again, we don’t hold it up as this is the one good relationship. There’s problems. Our gay characters are not 100% good or 100% bad.

How are you balancing the use of the green screen with the grittiness of the show?

Steven S. DeKnight: The cool moments in the show are character moments. Character intersections and interplay and really deep emotion. The stuff that will rip your heart out. We stir the pot so much with characters. That’s the actual backbone of the show. The visual stuff is just the gravy. It makes it look that much better.

Rob Tapert: They can make good promos. Give the audiences what they need to hold em’.

'The Thing' Prequel to Start Shooting