At first I was reluctant when everybody kept telling me to check out Attack on Titan. Then a friend made me sit down and watch the first episode and I just didn’t get it. After a while I decided to give the series another shot, and I’m glad I did because, as it turns out, it’s actually pretty great.

If you’re not familiar with the show I’d suggest you go and fix that. It should still be available for streaming on Netflix. The short version is it’s about the (supposedly) last remnants of humanity eking out an existence in a city surrounded by massive walls, which are meant to keep out the human-devouring Titans. The Titans themselves are still a big mystery to the humans, who have very few ways of fighting them off and even fewer means to actually kill any of them. Seriously though, go watch the anime if you haven’t yet. 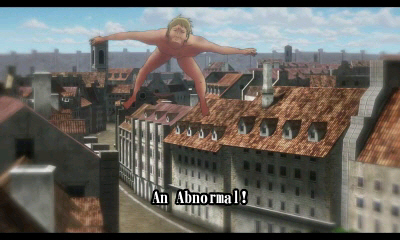 Fast-forward to last week and I found myself legitimately excited to see Attack on Titan: Humanity in Chains in the eShop. I mean I was a bit nervous because, you know, it’s a licensed game based on an anime. But my interest outweighed my trepidation and I ended up buying it. And now I’m writing about playing it for your amusement/to help you decide if you want to do the same.

First off, it’s not much of a looker. The textures are passable, the models are fairly simple, and most of the environments look the same (trees, plains, city). It’s not terrible, but there are some noticeable problems such as Titan animations pretty much not existing until they get close enough (it’s like watching a weird 3D slideshow). When you’re in the thick of it you’ll be too busy concentrating on movement and positioning – and the cool drama shots – but getting around makes this issue much more obvious.

The size limitations placed on the maps are more of an irritation, really. This is the sort of game where you’ll feel compelled to cut loose and zip all over the place, just because you can. However you won’t get very far before you run into a glowing red barrier that prevents you from leaving. I can’t say I’m a fan of this method of corralling players, and I feel like something more along the lines of “You’re out of bounds, turn back now” would have felt at least a tiny bit less restricting. 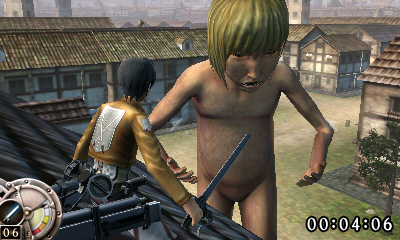 The controls take a little getting used to, but they’re actually pretty sensible once you get used to them. Holding R will shoot dual cables out of your ODM (Omni-Directional Movement) Gear and allow you to swing your way forward at a much faster pace than simply running. Holding Y brings up a targeting reticule that will launch a single cable out of the ODM Gear and pull you forward, and pressing Y while locked-on to a Titan will drag you towards the targeted area. However ODM Gear uses gas to shoot out cables and push the user forward, and it can run out if you use it indiscriminately. You can use gas canisters to refill the tank, and it takes a fair bit of time for you to run out of gas (har-har), but it can happen and you’ll be a sitting duck when it does.

Meanwhile, pressing X will begin a slash attack and initiate a relatively simple timing mini-game thing where you need to press X again at the right moment to connect with the most damage. The trick comes in knowing when to go straight for the hit and when to begin a spin (by pressing the movement stick in any direction), which will turn your character into a bladed whirlwind in order to avoid damage when a Titan swats at you. And they will swat at you, of straight-up snatch you out of the air if you aren’t careful. Much like the ODM Gear, your razors will begin to dull with use and you’ll want to switch them out for a fresh set before they break and become totally ineffective.

Once I got used to it I really began to enjoy dramatically swooping through the city streets and whiplashing around Titans’ heads as I moved in for the kill. There are a lot of little enjoyable nods to the show in the way the characters move, with the camera dramatically lowering as they skim the ground or blurring slightly when they’re reeling towards a Titan at speed. The way things slow down when you close in for the killing blow also looks awesome, and has the added benefit of making it easier to land the hit. There are some hiccups to it, naturally, but overall I found getting around to be a breeze (and very cool-looking). 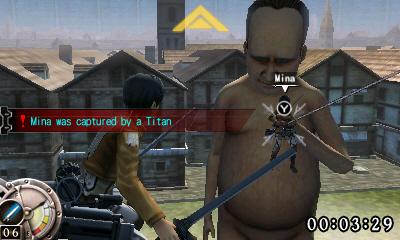 Humanity in Chains is split into two main sections: Story Mode, and World Mode. Story Mode follows the plot of the first two seasons of the show, with you being able to take control of five different characters (Eren, Mikasa, Armin, Sasha, and Captain Levi) and watch events unfold from their various perspectives. Each mission is loosely based on events from the anime, but there’s little noticeable difference between the characters aside from appearance and voice.

Honestly? Story Mode is a disappointment. Things take a while to ramp up, and once they do it’s difficult to remain invested because there’s no consequence to losing and little reason to keep playing other than unlocking more missions. Despite my initial excitement, I’m certain I’d have given up on Humanity in Chains if this was all it had to offer.

World Mode is where Humanity in Chains really opens up and shines. Rather than playing as a specific character (although you could if you unlock their set while playing Story Mode) you get to create your own and help them rise through the ranks. You’ll be running all sorts of Titan-killing missions, and using the money and support earned to hire troops to help you fight or take on even tougher missions. But be careful, because if your hired helpers get killed they’re gone for good. 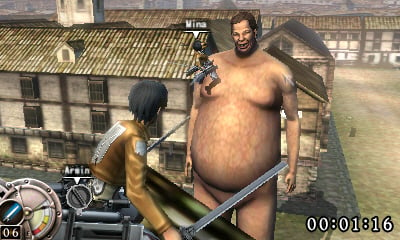 That’s just the tip of World Mode’s iceberg, though. Your character also gains experience, which can be doled out among various stats to improve their attack power, healing speed, maneuverability, and more. Some items you can find laying around the map during a mission can also be used to craft new razors, ODM Gears, and secondary weapons – or upgrade what you already have once you expand a facility enough.

You can also play online with up to three other friends (or random strangers). I have mixed feelings about this because I think it’s great to play with other people, show off your character, and potentially complete tougher challenges because just about any human player trumps computer-controlled help, but sometimes you’ll end up in a group of very high-level players who will decimate the Titans’ ranks before you can blink. 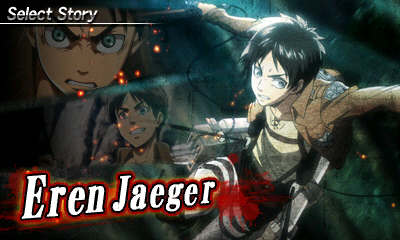 Aside from the general fun of zipping around and hacking up Titans, what really keeps me coming back (specifically World Mode) is how you’re always unlocking something or otherwise progressing. It seems like every single time I complete a mission I’m either gaining a level, earning a new title, unlocking plans for new equipment, unlocking new clothing options, earning enough cash to upgrade something, getting the resources I need to craft something cool, or improving my character’s affinity with their computer companions (which is important when you need to rely on them to cut you out of a Titan’s grasp). I feel like I’m always progressing no matter what I do, and I’m having fun doing it regardless.

I don’t think Attack on Titan: Humanity in Chains will excite anyone who’s never watched the anime, or entice them to do it if they weren’t interested in the first place. However, I think fans of the show will have a good time with it. It’s certainly not perfect, but pushing through the Story Mode until World Mode unlocks makes all the difference.