The Capitol will be a vastly different place the next time we visit, judging from the The Hunger Games: Mockingjay Part 2‘s first teaser poster.

The new poster shows a crumbling and decapitated statue of President Snow with the Mockingjay, the symbol of the rebellion, spray painted in red behind him. The bottom of the poster reads “#Unite revolution.pn.” Fans are encouraged to “Take a stand” upon visiting the website and registering to become part of the revolution.

Take a look at the pic below: 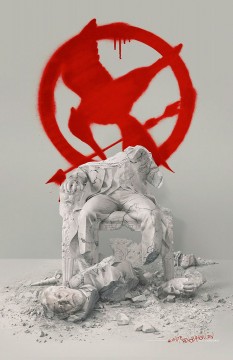 Fans will notice the above pic is a play on last year’s Mockingjay Part 1 poster, in which Peeta and Johanna were shown flanking the president with expressionless faces. 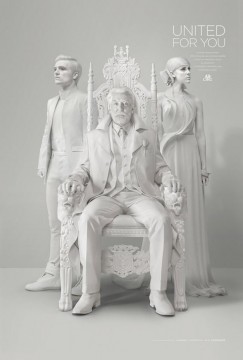 The fact that President Snow is alone and broken this go ’round says a lot.

Panem’s Twitter page has been quite active today as well, spreading the word of the revolution:

Are you surprised the film isn’t being promoted more, seeing how the premiere is only 5 months away? What do you hope to see happen in the final chapter of the franchise? Talk to us in the comments below.

The Capitol Is Falling Down in First 'The Hunger Games: Mockingjay- Part 2’ Poster