Scott Patterson is one of our favorite leading men, and he’s best known to fans as Luke Danes from Gilmore Girls. We were able to sit down with Scott at the ATX Festival last weekend and chat about the highly anticipated Gilmore Girls reunion, the fans, what he has coming up next and more.

I heard you were swarmed by fans this morning in the hotel lobby! How has this reunion experience been going for you so far?

Scott: It’s really a nice feeling. Look, I’m a fan just like they are. I’m a fan of the show and I support them, they support me. I feel a kinship with them. I really love these people, because they’re experiencing these shows and this series on a very deep level. You just have to marvel at the dedication and the complete artistry of Amy Sherman-Palladino. It’s remarkable. She must feel great! I mean look at what she’s done. For 15 years! New fans are discovering it now on Netflix, it’s changing people’s lives.

The girl I just sat down with said she became a journalist because of the show because she strongly identified with Rory, and it changed her life. I think that anyone that comes in contact with the show, it changes their life for the better. It’s an incredibly positive force out there in the world.

Another reason I liked the show, it was gentle. People need to be more loving and more gentle with one another. I had a son recently, he’s a year old, and I really just want to make the world a better place for him. I think that’s the way Amy probably felt when she wrote the show like, “Maybe I can make the world a little better of a place.” Though, I don’t know that that was her intention.

Speaking of Amy, she had recently said that she didn’t think she’d be able to sell Gilmore Girls in today’s TV climate. What’s your thoughts on that?

Scott: I think anybody reading that pilot script would’ve wanted to be in business with her. I think it’s timeless. Especially now with everything being so gritty, life becoming grittier and with this show you have this meadow of daffodils in the middle of the summer, which is Gilmore Girls, you can sort of spread out. You feel safe in it, and nothing horrible’s going to happen. I mean it’ll get a little emotional, but that’s as far as it goes. It’s about longing and yearning for love, it’s about family, it’s about maybe what America is yearning to become once again at a greater percentage.

It’s just uniquely Amy. It speaks of her experience growing up and her incredible sense of humor. Obviously, she’s a voracious reader, with all the references, and it’s just something that came together for her. It was a way for her to write the way she wanted to write and express all of these unique voices, and create all of these unique characters without being confrontational, without being gratuitous, without being gritty, because she probably thought, “The world really doesn’t need another one of those shows. The world maybe needs one of these.”

The question of the last four words that Amy intended to be spoken in the series is something of popular conversation here at ATX. I know she’s probably not going to tell us, but do you know what they are or does any of the cast?

Does the cast want to know as much as fans?

Scott: Yeah, but we don’t go there. I mean maybe she’s had conversations with other people. I’m sure there’s a drinking game that is designed to try to guess those four words.

If Stars Hollow had a baseball team, and it was up to Luke to name them – what name would he pick?

Scott: You know if it was Luke’s idea to have a team in the first place, and it was his team, the Stars Hollow Sartres or Nietzches. I mean I just see him as kind of an existential guy. He would probably do something like that, because it’s an oddball town. Imagine the Stars Hollow Sartres playing the Bay City Bombers. The Sartres win! They win and they didn’t even show up! They won in another dimension.

What are currently working on that fans should know about?

Scott: I’m an amateur photographer, and I’ve been doing it for a long time. I was posting some old work on my Facebook page and the curator of a very prestigious private collection, one of the top collections in the world, got in touch with me. Now we’re going to do a gallery show in New York… That’s very exciting. That’s happening right now as we speak.

A huge thank you to Scott Patterson for sitting down with us and taking the time to answer our questions. We were super excited for the Gilmore Girls reunion, and being able to chat with Scott was the icing on the cake for us! 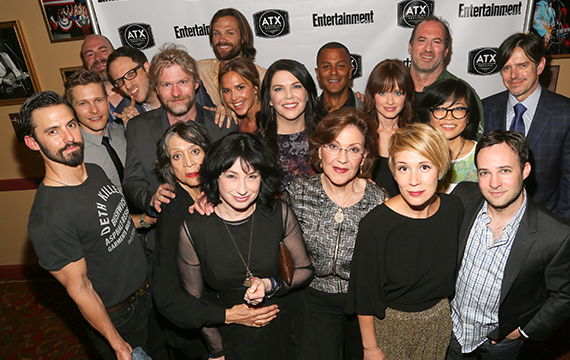 Be sure to check out the rest of our coverage from ATX Festival 2015!