The liars returned home in last night’s episode of Pretty Little Liars, but the trauma of their month in Charles’ dollhouse won’t be leaving them anytime soon. Somehow, through all the stress and hard times they went through in last night’s episode, the girls still managed to look like their usually stylish selves.

It was tough watching Aria, Hanna, Spencer and Emily deal with their time in the Dollhouse in their own ways. Aria turned into one of the chicks from The Crucible and started falsely accusing Andrew of being Charles, Hanna went all HGTV and completely made-under her room (and we don’t blame her, Emily turned into a trigger-happy badass and Spencer, suffering from insomnia, is doing her best to stave off her pill addiction, since her mom thought it would be best if she didn’t fill the sleeping pill prescriptions. We don’t know how the four managed to look so put together while going through all their respective troubles, but they did and we’re going to give you the scoop on where you can find some of our favorite pieces below:

Homegirl doesn’t make the best life decisions, but we have to hand it to her, when it comes to fashion Aria is definitely one of our favorite liars to look to. Last night Aria rocked a couple of pieces that stood out to us (but no fork earrings…yet)

We loved Aria’s graffiti print dress that she wore to the police station. Now maybe wearing a dress that’s covered in print that says ‘Stop Man’ isn’t the most appropriate thing to wear when going to falsely accuse someone of kidnapping, but hey, who are we to judge. The actual dress may not come with the extra man-hating print, but we still think it’s a pretty great dress. 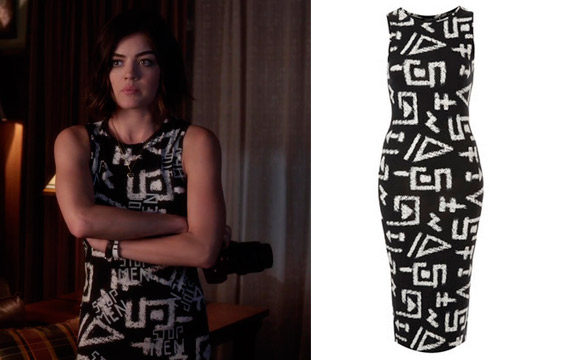 Aria’s Graffiti PrinkTank Midi Dress, which originally sold for $64, is currently sold out on Topshop, but you can keep an eye on it here.

Another piece of Aria’s that caught our eye was her ‘Barf’ shirt in Barbie print. While it may seem controversial to some, we think it’s a great play on the Barbie brand and is probably the closest that Aria ever got to a Barbie anything (we couldn’t see her playing with the dolls as a kid, could you?). 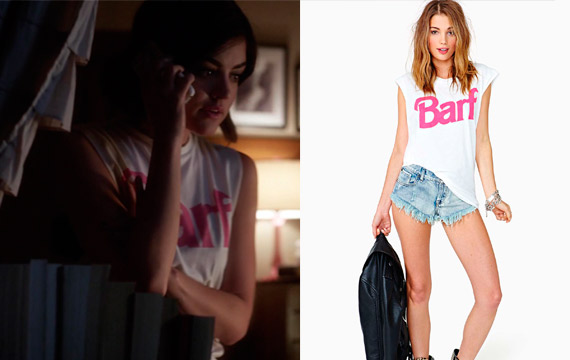 Spencer’s cardigan was adorable on her and although we wanted to hug her during her crappy welcome home, we also wanted to steal the thing right off of her back at the same time. The rust and cream fringe cardigan gave us a cool mixture of preppy and bohemian, a balance we love seeing our girl rock. 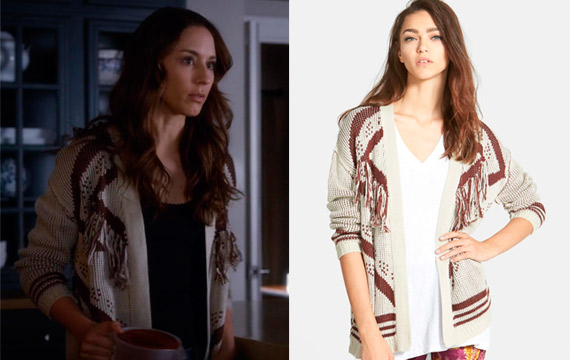 Spencer’s ASTR Fringe Open Cardigan is currently on sale for $11.98 at the Nordstrom Rack! Get it not before they’re all gone!

The liar at the center of everything usually looks well put-together, and this week was no different. Ali’s cropped suede jacket with draped lapels is one of my personal favorite styles of jackets (along with the biker jacket, of course!) and we love the look on her! 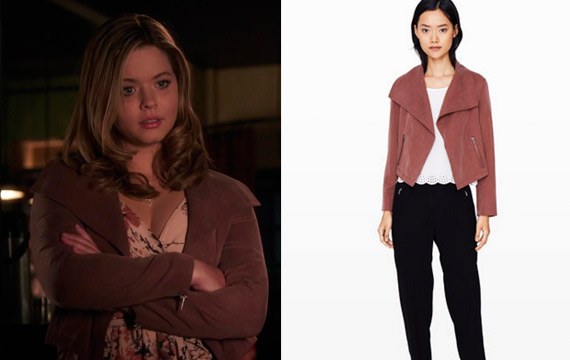 Ali’s Club Monaco Richi Jacket is now on sale for $119, but only size large is left in stock.

Let us know which of the liars looks you loved this week (and we’ll do our best to tell you where to find them) in the comments below!