It’s hard to believe it’s been 22 years since the original Jurassic Park debuted. It’s equally as hard to believe how good the special effects still look in that movie all these years later (In large part because the film used robots instead of CGI for many of the dinosaurs). After the not so thrilling sequels to Jurassic Park, Jurassic World had me excited yet skeptical. However, when Chris Pratt was officially cast in the lead role, I was sold.

Twenty-two years after the events of Jurassic Park, Isla Nublar now features a fully functioning dinosaur theme park, Jurassic World, as originally envisioned by John Hammond. After 10 years of operation and visitor rates declining, in order to fulfill a corporate mandate, a new attraction is created to re-spark visitor’s interest, which backfires horribly.

The first time that the iconic theme song notes began to softly play in Jurassic World, I felt like I was 9 years old again, the summer before 4th grade. Jurassic Park was my favorite movie as a child, and it has stood the test of time and held onto that spot as I’ve entered my 30’s. So how did Jurassic World hold up? It’s everything that you’re hoping it will be – with an epic dinosaur fight scene that words just don’t do justice.

Before everything goes to hell though, and we first visit the park – we learn that attendance is down. They need a new attraction to bring in more money. The amazingly adorable dino petting zoo isn’t cutting it (I should also note this film made me want to bring home one of the new and improved raptors. They were so cute!), and neither is the the massive sea monster, Mosasaur (which actually isn’t a dino at all), paired with all the other amazing attractions and dinos. 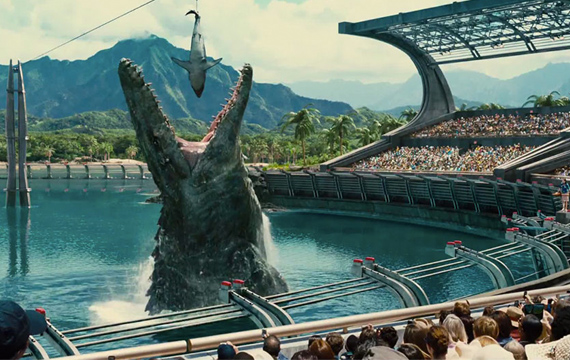 The solution to the park’s money problems is simple. The scientists have the fix in the bag. They’ve literally cooked up a new dinosaur. The Indominus Rex, who is half T. Rex and half something else we don’t find out until later. She’s fast, strong and smart, and she has no interest in containment. All of the factors that you probably don’t want in theme-park dino. From there, it just gets “icky” for everyone on the island.

Chris Pratt does a solid job in the spotlight as Owen Grady, despite having a few hokey scenes. There are probably four of them that I would reshoot and provide him with different dialogue for. Having him say a cheesy one-liner while the camera slowly zooms in on just him – just takes away from the state of mind the film had put me in. Yes, we’re dealing with dinosaurs here. We don’t need any cheese factor. We’re too busy being wowed.

Bryce Dallas Howard delivers a fine performance as Claire Dearing, the control-freak lady in-charge (who can run impressively well in heels). My only issue with her character is that I didn’t sense any actual chemistry in the romance the film tries to create between her and Owen.

Jurassic World will feel very nostalgic to fans of Jurassic Park – even down to similar story elements – such as two siblings getting in trouble in the park. The present-day Jurassic World itself feels like it would be exactly what John Hammond envisioned. No expense has been spared. That setting aided in creating an engrossing and thrilling script that when paired with this stellar cast – accomplished everything that movie-goers were hoping for – what I’m willing to bet will be the biggest movie of the summer.

The climax of the film may seem a bit over the top to some, but I argue that it’s exactly what all fans really want. I mean, after all, it’s dinosaurs…. and Chris Pratt. Do we really need anything more? Perhaps a sequel. Don’t worry – this film sets that up that possibility quite nicely.