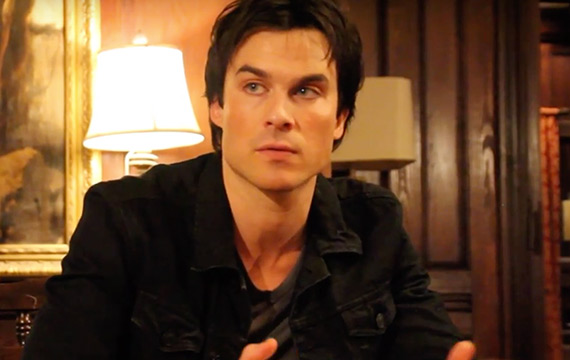 We had the chance to visit the set of The Vampire Diaries yesterday here in Atlanta, and we chatted with Kat Graham and Ian Somerhalder about one of the fans’ favorite shipperdoms “Bamon.” From the impact that both the characters, Damon and Bonnie, have had each other to Bonnie starting to come into her own, both Ian and Kat opened up with press.

“I think Bonnie’s time with Damon actually affected the character’s personality in a huge way,” Kat Graham stated when asked how her time with Damon last season prepared her for Enzo this season. “I don’t even think we’re dealing… even the way they’re writing the character, there’s a lot of “Damonisms” in the writing.”

“I don’t think it’s just the time they spent. I think it completely altered her.” Graham went on to say.

While Ian and Kat didn’t have too much to tease for Bamon shippers, they did speak very fondly of each other’s characters.

“So the Bonnie Damon relationship…. poor Bonnie. He just drags her repeatedly through the mud, and she still loves him. I don’t know why. Crazy woman.” Somerhalder smirked.

“Kat Graham is such a strong actor, and Bonnie is such a strong character that I want her to… and you’ll see her sorta start coming back into her own and taking a lot less s***.” Somerhalder continued to say.

Check out a few clips from our interviews with Kat Graham and Ian Somerhalder below!

Be sure to catch an all new episode of The Vampire Diaries tonight on The CW! And stay tuned for more of our videos from our visit to set yesterday!!

'Miracles From Heaven' Trailer Will Give You Something to Believe In