Star Wars: The Force Awakens has crushed North American box office records with the biggest opening of all time. The film made $238 million over the five day debut.

The huge figure makes it the highest-grossing movie debut in box office history for U.S. and Canada, not accounting for inflation. It also sets a new record for a December opening, more than doubling the $84.6 million made by The Hobbit: An Unexpected Journey in 2012. 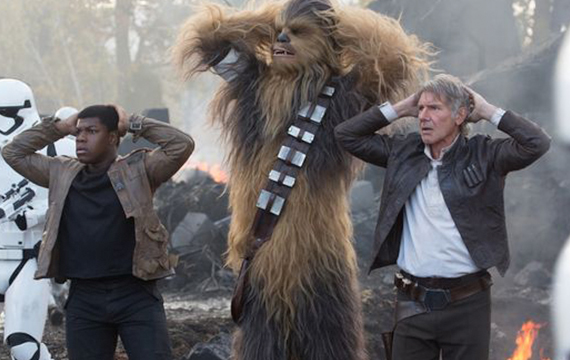 The gross helps to boost The Force Awakens‘ global grab to $517 million after setting new opening weekend records in the U.K., Germany, Australia and Russia, among 14 other countries.

“Our sole focus has been creating a film that delivers that one-of-a-kind Star Wars experience, and director J.J. Abrams, Lucasfilm President Kathleen Kennedy, and the Lucasfilm team have outdone themselves,” reads a press release from Alan Horn, chairman of Walt Disney Studios. “To all of the fans around the world who not only came out in Force to make this such an exciting and astronomical debut, but who treated this film as their own and helped preserve the experience for their fellow fans by not spoiling it – thank you, we do.”

Meanwhile, Alvin and the Chipmunks: The Road Chip is a distant new entry in the North American chart at number two with $14.4 million, while Tina Fey and Amy Poehler’s Sisters comedy takes the third spot with $13.4 million.

Did you see Star Wars: The Force Awakens this weekend? We’d love to hear your thoughts on it in our comment section below!