Natalie Dormer stars as twins Jess and Sara Price in The Forest, which opens up in the theaters today.

The film tells the story of a woman who goes missing in a woodland area in Japan where people go to commit suicide. As soon as she saw the script Natalie knew she needed to be involved because the storyline is something everyone will be able to relate to.

“It was so much fun, it really was,” she told talk show host Jimmy Kimmel. “I loved the psychological element of it. I was fascinated by the premise of the movie, which is basically: imagine a place where you go and all your inner demons get reflected back at you. So all that stuff you really regret, that baggage you’re carrying, like that Christmas card you never sent, or that thing you said to your mother-in-law, imagine it can manifest itself into a monster and come and haunt you. We’ve all got stuff we need to deal with.” 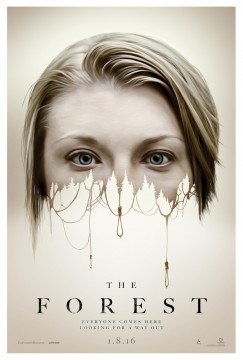 “I have a real sister in real life, and if I ever felt that I was losing my way in my characterization, I just took it back to ‘I’m standing in a forest at 3AM, it’s freezing cold, I’m tired… now just imagine that my real sister is in this forest and I’m terrified for her and hope she’s OK,’” she told TWIST.

As the two characters have such opposing personalities, Dormer took her time in getting to know each alter ego. Despite the terrifying setting of the movie, the actress found the psychological side of things more disturbing.

“(The movie) is based on this incredible relationship between these two sisters, and then this idea that you wander into a forest and that your own (personal) demons that you’ve been trying to suppress come up to greet you, was really interesting for me to explore,” she added.

“It’s got the fun and the frights as well, but for me the really scary thing is the mental descent into madness that Sara goes through.”

The Forest is set in the Aokigahara forest, which is at the base of Mount Fiji in Japan. It meant Game of Thrones star Dormer spent a great deal of time in the country, which wowed her with toilets that boast heated seats and play music. She also loved how polite the people were, although admitted getting into a few difficulties, as she never knew when to stop bowing to them.

The Aokigahara Forest is a sacred area in the country, with Dormer explaining some of the reasons why it was the perfect setting for the flick. “(It’s a) superstitious place to the Japanese,” she said. “You can get lost very easily, it’s very dense and there’s iron ore under the mountain which messes with your cell phone or your compass so if you go in and it gets dark, you’ve lost connectivity and you’re kinda screwed.”

The Forest is out in theaters now! Curious what we thought? Check out our The Forest Review.