My expectations were high going into The Revenant. I expected a beautifully shot film and an Academy-award winning performance from Leonardo DiCaprio. What I did not expect was the most stressful viewing experience I’ve ever had of a film, and I mean that in a good way. I became so lost and entranced in this movie, that for the last 30 minutes of the film my heart-rate stayed at a constant cardio pace.

Deep in the unchartered American wilderness, hunter Hugh Glass (Leonardo DiCaprio) is severely injured and left for dead by a traitorous member of his team, John Fitzgerald (Tom Hardy). With sheer will as his only weapon, Glass must navigate a hostile environment, a brutal winter and warring tribes in a relentless quest to survive and exact vengeance on Fitzgerald. Inspired by a true story, The Revenant is directed and co-written by renowned filmmaker and Academy Award-winner Alejandro G. Iñárritu (Birdman, Babel).

The one question you’ll find yourself repeatedly asking during the film is how Glass is still alive. The fact that this movie is based on a true story is all the more remarkable. It is a revenge tale, and it’s not too complicated, yet the emotional journey that it takes the audience on is stressful and intense.

Visually, The Revenant is just as stunning as you imagine it. The film was all shot in natural light, which meant that some days they couldn’t film more than just a few hours. On top of the lighting, is the actual camera work, which is especially astounding in one scene where DiCaprio hops on his horse and rides until he literally can’t ride anymore. The camera stays paced with DiCaprio, swooping back and back to, up and then around. How that scene was shot continues to fascinate me, not to mention the infamous (whether you’ve seen the film or not) bear attack. I think the The Revenant Blu-ray will be the first movie I’ve ever purchased solely for the special features. Technically and visually, the film is a masterpiece.

The Revenant is without a doubt DiCaprio’s finest work to date, and surely his first Oscar-winning role. If it isn’t, we start to have to ask ourselves who in Hollywood DiCaprio ticked off (as he should have won for a number of roles before now, notably (in my opinion) Blood Diamond). That being said, I was recently discussing DiCaprio’s acting with another director who asked me the question, “When have you ever seen Leo in a role and not thought, ‘Oh that’s Leo’?” It was an interesting question, and I had to admit that when I watch DiCaprio, I can’t say as I ever forget that it’s DiCaprio. Whereas when you watch, say Daniel Day Lewis, you completely forget you’re watching an actor. All of this being said, I think that what DiCaprio does in The Revenant isn’t like anything he’s ever done before. It’s his most brutal and exposed role to date, he’s outside of his comfort zone, and he truly shines.

Also worth mentioning is Tom Hardy. Hardy does an incredible job in this picture, and he doesn’t get lost in DiCaprio’s shadow. Domhnall Gleeson and Will Poulter also star and deliver solid performances as well. 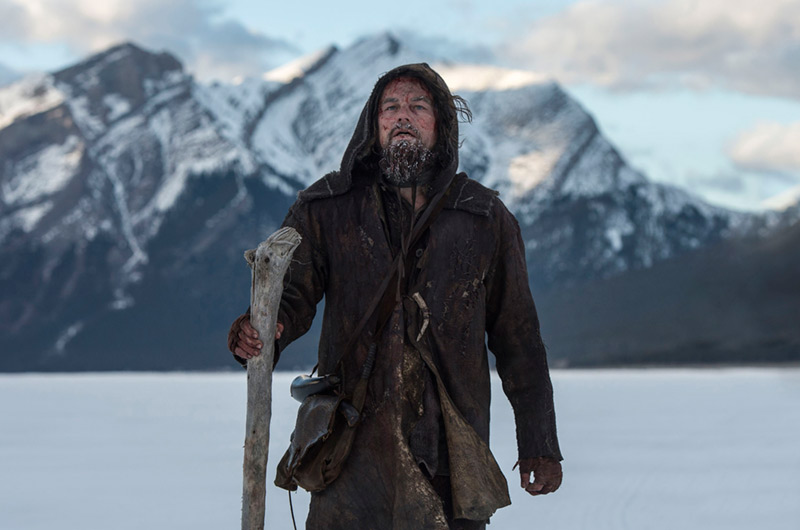 I would say the only real competition this film has for Best Picture at this year’s Academy Awards is Spotlight. They’re both very different films, but equally as good and as immersive for the viewer. The Revenant is worth seeing in theaters for its cinematography alone. The size and scope of the harsh yet beautiful locations where they filmed is something that needs to be seen on a big screen in order to fully appreciate the artistry. Beware the film is incredibly violent and bloody, I found myself covering my eyes and squealing at several points in horror, but honestly it made me all the more impressed with the film’s visual effects and makeup artists. That being said, the film is not kid-friendly.

Overall, The Revenant is one of the best films of 2015, if not the best. I couldn’t recommend it more, and I couldn’t be more excited about this year’s Golden Globes and Academy Awards. Director Alejandro Iñárritu deserves high praise for this film, and of course, my fingers are crossed that it will finally be Leonardo DiCaprio’s moment of glory. He deserves it.