As we near the close of Upfronts, today CW presented it’s fall schedule for 2016 and 2017 midseason. The new additions to the lineup include CBS’ Supergirl, Frequency, No Tomorrow, and Riverdale.

CW’s presentation to advertisers, affiliates and national media took place at the New York City Center in New York City, kicked off by the rock band Fitz and the Tantrums performing their hit singles “Handclap” and “The Walker

“We have four terrific additions to our schedule next season, and five great anchors at eight o’clock, every night of the week,” said Mark Pedowitz, President, The CW.

“The CW has become known as the home of the best, most creative series on broadcast television, in a range of genres that appeal to the most balanced audience of any broadcast network, and the series we have for next season will absolutely continue to fit that bill.

“We are thrilled to have Supergirl on The CW this fall, joining our popular roster of DC heroes. Plus, we have three new series lined up for next season that perfectly fit our brand, with the smart, charming comedy NO TOMORROW and the high-stakes drama FREQUENCY this fall, and the subversive take on small-town life, Riverdale, at midseason. With these four new series added to the strongest, most competitive schedule we have ever had, The CW just keeps getting better.” 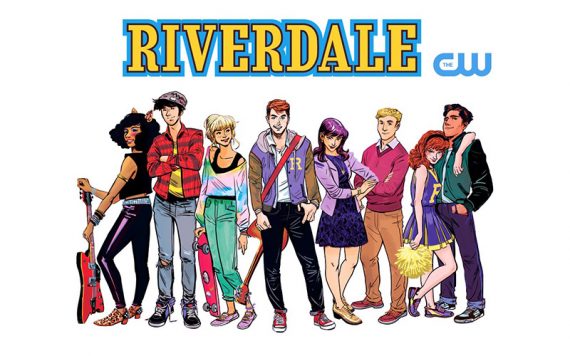 Curious what the new series will be about? We have the official descriptions below.

Evie Callahan (Tori Anderson), a risk-averse quality-control assessor, appreciates order. Whenever she’s making a list, “make a list” is both the first thing on it and the first thing crossed off. Such a regimented life has its drawbacks. Her on-again/off-again romance with the sweet, but soft-spoken Timothy (Jesse Rath) has sputtered out. Her career has stalled. Her boss, Deirdre (Amy Pietz), a petty tyrant with breath that could kill a plant, laughs off her ambitions. Then Evie meets charming, free-spirited Xavier Holliday (Joshua Sasse), and the attraction is immediate and electric. He brings a jolt of joyful, rollicking romance into her life. Xavier encourages Evie to carpe that diem, because it’s more fun that way and because, well, the apocalypse is, you know, nigh. He believes humankind has a mere eight months and twelve days until a runaway asteroid smacks us all into stardust. That’s why he made an Apocalyst – a tally of every last thing he wants to do before the world goes kaput. So with the help of her friends – Hank (Jonathan Langdon), a diehard conspiracy theorist, and Kareema (Sarayu Blue), a droll nihilist – Evie must decide whether Xavier is certifiable and whether that even matters, if being with him means living her life more fully. Based on the International Emmy-nominated Brazilian format from Grupo Globo, NO TOMORROW is a romantic comedy with the ultimate ticking clock. NO TOMORROW is from CBS Television Studios and Warner Bros. Television in association with Electus, with executive producers Corinne Brinkerhoff (“American Gothic,” “Jane The Virgin,” “The Good Wife”), Maggie Friedman (“Witches of East End”) and Ben Silverman (“Jane The Virgin,” “The Office”).

Detective Raimy Sullivan (Peyton List) has always wanted to prove that she is nothing like her father. In 1996, when Raimy was eight years old, NYPD Officer Frank Sullivan (Riley Smith) left Raimy and her mother, Julie (Devin Kelley), behind when he went deep undercover, got corrupted, and got himself killed. Or so the story has always gone. Few people knew about the secret undercover sting operation Frank was really charged with, led by Stan Moreno (Anthony Ruivivar), who has now risen to Deputy Chief of Police. Frank’s former partner, Lieutenant Satch Reyna (Mekhi Phifer), is now Raimy’s mentor and friend, and he has urged her to let go of the hurt and anger she still feels about Frank’s disappearance and death, but the old pain still lingers. Raimy can barely bring herself to discuss Frank, even with her devoted boyfriend, Daniel (Daniel Bonjour), or her childhood friend, Gordo (Lenny Jacobson). Now, twenty years later, Raimy is stunned when a voice suddenly crackles through her father’s old, long-broken ham radio – it’s Frank, somehow transmitting over the airwaves and through the decades from 1996. They’re both shocked and confused, but Raimy shakes Frank to the core when she warns him that the secret sting he is undertaking will lead to his death. Armed with that knowledge, Frank survives the attempt on his life. But changing history has dramatically affected Raimy’s life in the present – and there have been tragic consequences. Separated by twenty years, father and daughter have reunited on a frequency only they can hear, but can they rewrite the story of their lives without risking everyone they love? FREQUENCY is from Warner Bros. Television in association with Lin Pictures, with executive producers Jeremy Carver (“Supernatural”), Toby Emmerich (“The Notebook” feature film), John Rickard (“Horrible Bosses”), Dan Lin (“The LEGO™ Movie,” “Sherlock Holmes”) and Jennifer Gwartz (“Veronica Mars”).

As a new school year begins, the town of Riverdale is reeling from the recent, tragic death of high school golden boy Jason Blossom — and nothing feels the same… Archie Andrews (KJ Apa) is still the all-American teen, but the summer’s events made him realize that he wants to pursue a career in music — not follow in his dad’s footsteps—despite the sudden end of his forbidden relationship with Riverdale’s young music teacher, Ms. Grundy (Sarah Habel). Which means Archie doesn’t have anyone who will mentor him — certainly not singer Josie McCoy (Ashleigh Murray), who is only focused on her band, the soon-to-be-world-famous Pussycats. It’s all weighing heavily on Archie’s mind — as is his fractured friendship with budding writer and fellow classmate Jughead Jones (Cole Sprouse). Meanwhile, girl-next-door Betty Cooper (Lili Reinhart) is anxious to see her crush Archie after being away all summer, but she’s not quite ready to reveal her true feelings to him. And Betty’s nerves – which are hardly soothed by her overbearing mother Alice (Mädchen Amick) aren’t the only thing holding her back. When a new student, Veronica Lodge (Camila Mendes), arrives in town from New York with her mother Hermione (Marisol Nichols), there’s an undeniable spark between her and Archie, even though Veronica doesn’t want to risk her new friendship with Betty by making a play for Archie. And then there’s Cheryl Blossom (Madelaine Petsch)… Riverdale’s Queen Bee is happy to stir up trouble amongst Archie, Betty, and Veronica, but Cheryl is keeping secrets of her own. What, exactly, is she hiding about the mysterious death of her twin brother, Jason? Riverdale may look like a quiet, sleepy town, but there are dangers in the shadows… Based on the characters from Archie Comics, RIVERDALE is from Warner Bros. Television and CBS Television Studios, in association with Berlanti Productions, with executive producers Roberto Aguirre-Sacasa (“Supergirl,” “Glee”), Greg Berlanti (“Arrow,” “The Flash,” “Supergirl,” “DC’s Legends of Tomorrow”), Sarah Schechter (“Arrow,” “The Flash,” “Supergirl,” “DC’s Legends of Tomorrow”) and Jon Goldwater (Archie Comics).

Premiere dates have not yet been announced, but we’ll have them posted as soon as they are released!

Are you excited about the new additions? Super excited that your favorite shows will be around for another season? Sound off in our comment section below!