by Emma Loggins
in Entertainment, Featured 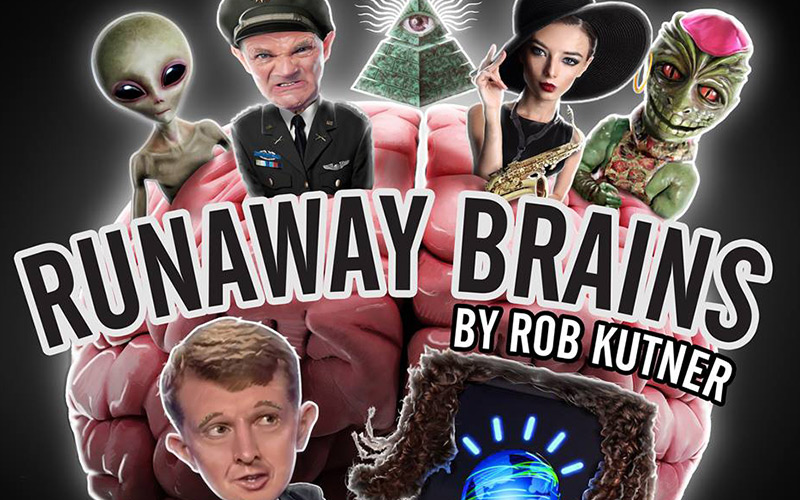 Rob Kutner is a 5-time Emmy-winning writer for CONAN, The Daily Show with Jon Stewart, and Dennis Miller Live. He is also the author of the sci-fi comedy bestsellers Apocalypse How: Turn The End Times Into The Best Of Times and The Future According to Me. He is currently writing the Farrago comic book series Shrinkage, and his newest project, a scripted audio comedy series Runaway Brains (starring Weird Al, Mayim Bialik, Michael Ian Black and more!), launched this month on Howl.fm.

Runaway Brains tells the imagined story of Jeopardy champ Ken Jennings and his rival, IBM supercomputer “Watson” (played by Weird Al Yankovic), forced to go on the lam when it’s discovered Watson contains “dangerous secrets.” They undergo a highly unlikely journey that take them through everything from Freemasons to Area 51 to the International Gay Jewish Lizard Conspiracy.

We had the chance to chat with Kutner about Runaway Brains, a project which he describes as
cuckoo, surprising and nerd-tastic. Take a look below!

How did you come up with the idea for Runaway Brains?

Rob Kutner: One night I fell asleep watching Jeopardy after having eaten a burrito so old, it had evolved sentience and become self-aware…

No actually, I’m fascinated by AI, and have noticed a trend in recent years away from machines being depicted as “DOES NOT COMPUTE” automatons and more like Siri, or Ava from Ex Machina – eager learning machines trying to befriend and understand humans. I also follow Ken Jennings on Twitter and noticed how sharp and funny he is, so one day I started imagining him and Watson interacting outside of a game show.. and then I was off to the races.

Did you always envision the podcast medium for this?

Rob Kutner: Yes! I listen to a lot of podcasts, but so many are very, very long. I was spending so long sitting in my car listening, my kids were persuading my wife to “start dating again.”

I always wished there was something short, sweet, bite-sized (or maybe “Fun-Sized?”), and tightly scripted. So I decided to do it myself.

Did this medium present you with any challenges that you didn’t foresee?

Rob Kutner: When you do just audio, the sound quality has to be pristine. I thought we could do this guerilla-style, people recording themselves on their phones and the like, but the difference is huge.
Also, from a creative standpoint, you have to make sure every piece of info is conveyed, because you don’t get to see any images. Unless you’ve had just a bite of my burrito.

Can you talk a bit about the star-studded cast that Runaway Brains has and how they became involved in the project?

Rob Kutner: A lot of them were folks that I’d been trying to do stuff with for years – Mayim Bialik, Weird Al, David Koechner, Joshua Malina – but it had never worked out because of schedules. Audio sessions are easier to plan around, and for celebrities the great thing is, no one has to get into makeup. Except me, of course, I spent 4 hours before each recording session perfecting my “smokey eyes.”

After the 10 episodes are all available – will there be more down the line? Perhaps a Season 2?

Rob Kutner: If the public shows up at my castle door wielding torches and demanding it! I left the ending open on purpose, where Ken and Watson have let all hell break loose across the world. I think we’d enjoy seeing them have to clean it up, one “Potent Potables” answer at a time.

Runaway Brains premiered May 11 on Howl.fm, and it is rolling out a few new episodes every week (10 episodes total). Definitely check it out if you haven’t already!

'Me Before You' Contest