Okay, so first off, I never played any of the original Zero Escape games. I may have tried the demo for Virtue’s Last Reward on 3DS but that’s as far as my experience with this series goes. What this means is I’m not in the best place to make any sort of comparisons to the earlier versions, because that’s what Zero Escape: The Nonary Games is – a collection and sort of remastering (I guess?) of the two original games. As I understand it there have been some general tweaks made including things like voice dubs in both English and Japanese for both titles, and additional save slots as well.

First up is Zero Escape: Nine Hours, Nine Persons, Nine Doors (a.k.a. 999). A young man named Junpei wakes up in an unfamiliar location, locked in a small room with no recollection of how he got there. Suddenly a window in the room breaks open and water starts rushing in, leaving Junpei with no other option than to try and figure out how to unlock the door and not die horribly. After that little adventure he stumbles upon eight other people who are in similar situations to his own – or so they say. The group learns that they have to work together in order to find a way out of their current situation, and they need to do it fast because the (extremely remodeled) cruise ship they’re on is going to sink in about 9 hours. 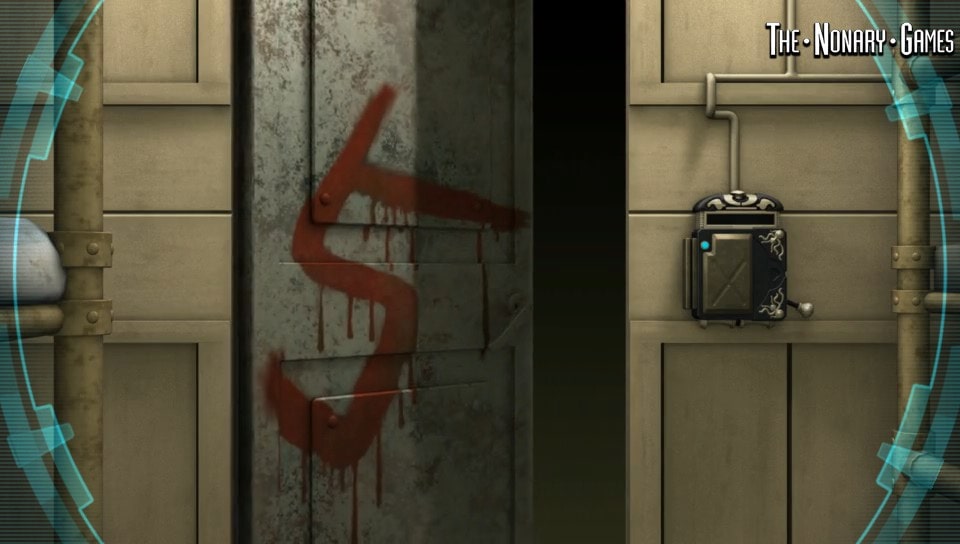 It’s an interesting setup that’s sort of like Saw without the blatant mutilation and murder, although moral quandaries do pop up from time to time. Sort of. You see, 999 is more of a visual novel with puzzle elements than a more traditional game, which means that there are only a handful of moments when you, as Junpei, are able to make decisions that will affect the story. Mostly it’s just reading and then trying to solve a location’s puzzles in order to unlock the way to the next area (and more reading). I’m honestly fine with this, or at least I was once I knew to look at 999 as a visual novel rather than as an adventure game.

The story was interesting enough for me to want to play through and see what this whole “game” thing was about, but my god some of the writing was… it took me out of the moment on several occasions. Between characters knowing way too much about really specific things – chemical equations, celestial symbols, etc – and the hackneyed “blossoming love story” with Junpei and his estranged elementary school friend (you haven’t seen each other for years and suddenly you’re both all nervous and flirty after a few hours? WTF, man??) I was about ready to give up on more than one occasion. I’m glad I stuck with it overall, because there were some genuinely interesting puzzles and some (SOME) worthwhile character moments. Still, so much of the writing was groan-inducing, nonsensical, or dull and pointless. I had so many moments of “either get to the point or shut up.” Which is a shame, really, because the english voice acting is actually pretty good across the board. Sure there was the occasional rough line delivery here and there, but overall the actual acting was way, way better than the writing. 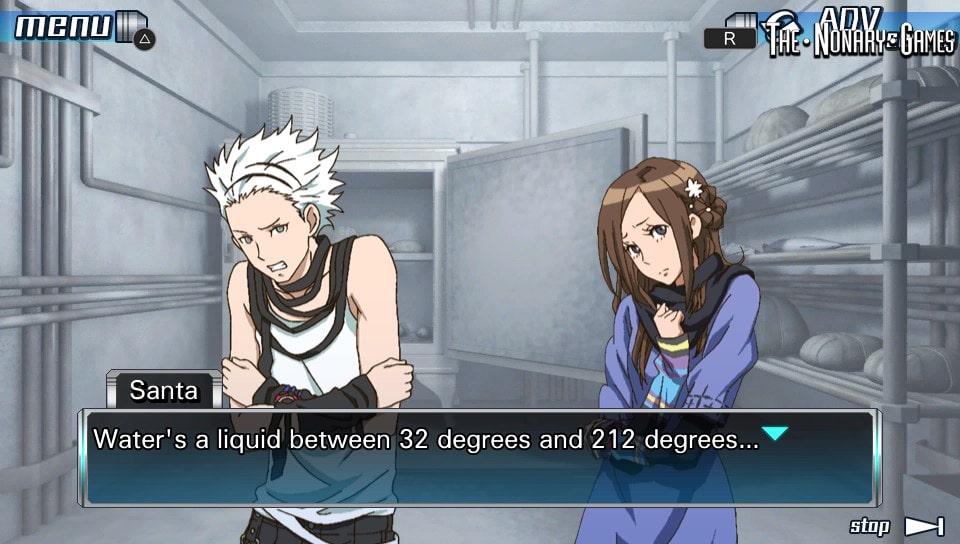 Then there’s VIrtue’s Last Reward, a sequel to 999 that may or may not have a bit of overlap with the first game. A young man (again) named Sigma wakes up in a strange place (again) and has to figure out how to escape before meeting a horrible end (again). Once again (seeing a pattern here?) it’s a visual novel with room escape puzzles, and once again there’s a cast of nine characters trying to escape a desperate situation and not die. Only this time around there’s an added emphasis on players being paired together and sometimes you can choose to ally or betray people you’ve puzzled with previously. Oh, and instead of the static character portrait illustrations and backgrounds from 999, here things use 3D models.

The 3D is sort of hit and miss with me. I like having more freedom to look around rooms as I’m solving puzzles as it makes it easier for me to orient myself in the space. I don’t like how it pulls a lot of the visual style out of each of the characters. I mean there are still over-the-top designs like anime women with impossible hair and a robot man and whatnot, but the 3D character models feel much more wooden and lifeless than the 2D portraits of less bizarre characters from the first game. Which is doubly weird because the 3D models in VIrtue’s Last Reward actually animate instead of just sit there. 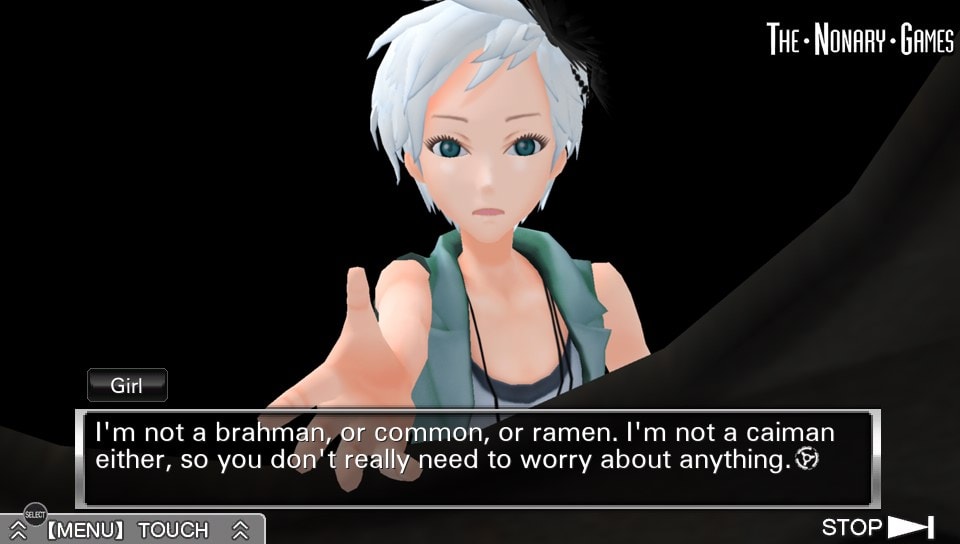 Another problem I have with the second game is the story. All the same issues I had with 999 are here as well, and in some cases even worse. Characters still know an absurdly convenient amount of very specific things as they pertain to the puzzles, they still waste time talking about stuff that doesn’t really matter or take way too long to talk about things that do matter, and now they’re also prone to recap all of the arduous and painfully obvious stuff they literally just talked about. Seriously, everyone spent like 5-10 minutes going over “chromatic doors” and “penalties,” then Sigma went over all of it AGAIN immediately after the conversation ended.

Oh, and about Sigma: he’s a terrible protagonist. Junpei from 999 had his quirks, sure, and I still gag whenever I think about the forced love story, but Sigma is a waste of oxygen. On top of the need to repeat things to a degree that fills me with rage, his interactions with the other characters are painful to watch/read. He makes cat puns when talking about cats for some reason and explains it away as some sort of natural tic he’s had since childhood, he misses the blatantly obvious, he misses the blatantly obvious after three different characters have already spelled it out for him, and his personality comes off as someone desperate to try and present players with a relatable anime nerd without actually knowing anything about anime nerds except the words “anime” and “nerd.” On top of that he has no voice actor for some reason, which makes no sense to me seeing as Junpei did have a voice. So the silence of his bits of dialog stand out like a sore thumb that you didn’t realize was sore until no less than fifteen other people commented on how swollen and red it looks. God I hate Sigma. 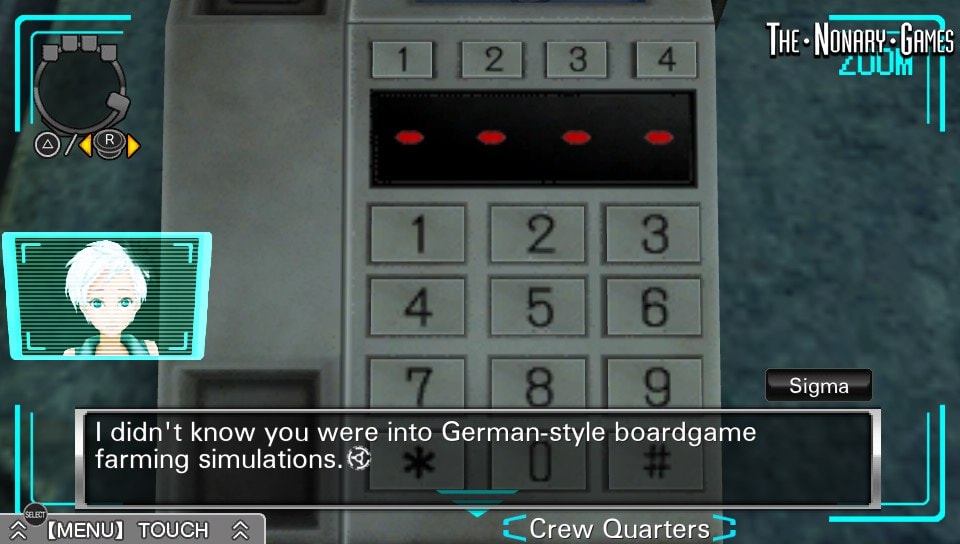 Worst of all, I just don’t like the puzzles in Virtue’s Last Reward. The stuff from 999 was a bit obtuse at times simply due to the disconnect I felt when trying to navigate through a bunch of flat screens, so you’d think the 3D environments would make everything perfect. Nope. Instead, while it’s easier to stay oriented the actual puzzles are a mish-mash of tough and stupid. Not stupid easy, just stupid. Sometimes you’ll think the solution is obvious but a small, almost inconsequential detail completely changes it and you end up walking in circles for a half hour. Sometimes you want to look at something you know has a puzzle solution on it more closely but you simply can’t because why would anyone want to get a closer look at something super important, right? Sometimes you have the solution but you didn’t press the buttons in the right order despite there being no indication that you actually needed to press them in a specific order in the first place.

What’s kinda sad is I’d actually like Zero Escape: The Nonary Games more if it were just a remaster of 999. Virtue’s Last Reward has killed so much of my fun it’s retroactively done away with a lot of the enjoyment I found in 999. That said, I do see myself returning to 999 at least a few more times to try and unlock every dialog moment and explore all of the different story paths. I’m just going to pretend that Virtue’s Last Reward doesn’t exist. Things will be happier that way.