If you’re a child of the 1980’s as I am, names like Hulk Hogan, “Rowdy” Roddy Piper and Andre the Giant are quite familiar to you even if you’re not a wrestling fan. But a true wrestling fan would also recognize such names like the Farmer’s Daughter, Americana and Mt. Fiji. Of course I’m talking about GLOW, the Gorgeous Ladies of Wrestling that ran from 1986 to 1990 and was a global phenomenon. Now, the latest Netflix original series of the same name tells their inspired story.

The names may have changed but the story on how this very unique and campy television series about women’s wrestling is both very compelling as a drama with a refreshing sense of humor that can be found throughout. GLOW was sports entertainment long before the term became synonymous with today’s professional wrestling. GLOW the Netflix series stars, Alison Brie as Ruth Wilder, an out of work and out of options actress who as chance would have it, lands an opportunity in the most unexpected place, the world of woman’s wrestling. 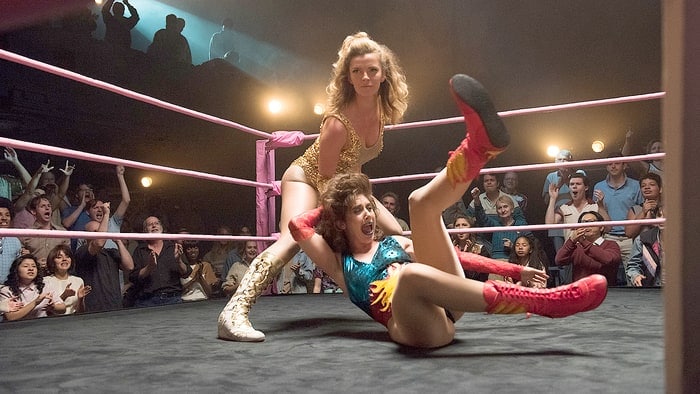 Ruth along with 12 other Hollywood wannabe’s are brought together by Sam Sylvia (Marc Maron) a womanizing director of “B” movies looking for a payday and his next gig. One of the Hollywood wannabe’s is a Debbie (Betty Gilpin) an ex soap opera star and Ruth’s former best friend after she discovered Ruth was having an affair with her husband. Sam sees the selling potential of pitting Debbie with her star power as the face of GLOW and having Ruth be the ultimate villain. Talk about art imitating life.

The acting led by Brie, Gilpin and Maron along with a wonderful supporting cast makes this a winner for Netflix. Binge watching is quite easy given that season one consists of 10 episodes of nearly 30 minutes each. I find it very appropriate in today’s world where woman’s roles are starting to get its long overdue respect, and opportunity (thank you Wonder Woman), that the glory days of GLOW and its stellar female cast get to shine. See it and embrace it.

May the Dork Be With You,
JPB
The Dork Knight

James
James P. Brown aka “The Dork Knight” is a contributing writer for FanBolt.com as well as publisher of The-Dork-Knight.com since 2013 where he reviews movies and television series. He lives and breathes nerd culture. James is proof that a Star Wars fanatic can be a passionate Trekker as well He also believes in a world where everyone embracing his or her inner dorkdom could be the secret that leads to world peace. James is based out of Upstate New York.