Fil Eisler Talks ‘Empire,’ ‘Dietland,’ and the Power of Music 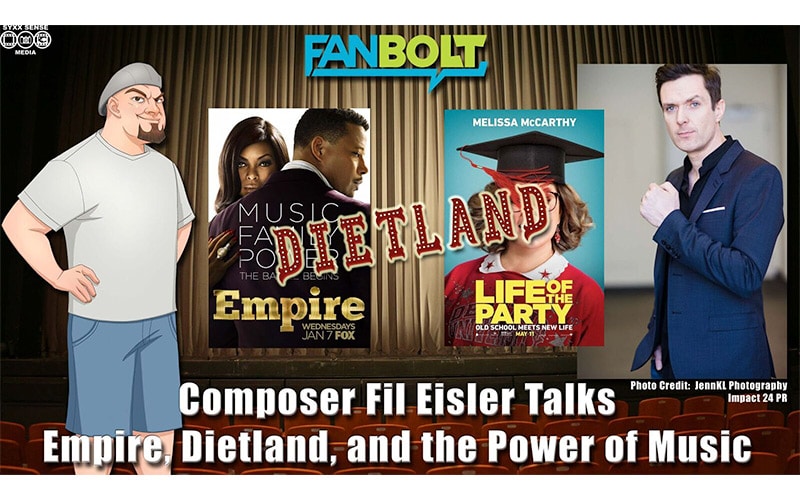 Hot on the announcement that Empire has been renewed for its fifth season, composer Fil Eisler sat down with FanBolt to talk about his unique musical style and the power of a film’s score. Fil’s compositions can be heard in the upcoming AMC series Dietland and the Melissa McCarthy comedy Life of the Party. You can pick up his works on iTunes.

Eisler has recently composed music for such varied films as MGM and New Line Cinemas’ People’s Choice Awards-nominated “How To Be Single,” starring Dakota Johnson and Rebel Wilson, and the Peabody-winning documentary, “Newtown.” He composed the main title theme and acted as co- composer and music director for the documentary, organizing and leading an all-star line-up of over a dozen Hollywood composers, who each donated a piece of music for the film.

In 2008, Eisler was among a select group of up-and-coming composers invited to the Sundance Film Composer’s Lab, and in the years since his projects have garnered critical acclaim on the film festival circuit and beyond. As part of his ongoing commitment to independent film, he returned to Sundance in 2011 with the Inupiaq-themed thriller “On the Ice,” scored the Sundance-backed documentary “Whatever It Takes” and Jonathan van Tulleken’s BAFTA-nominated horror thriller “Off Season.” Eisler won the Best Film Score Award for his work on Robbie Pickering’s “Natural Selection” at the 2011 SXSW Film Festival. The film was the most decorated of the festival, also winning the Grand Jury and Audience Awards. He continued his work with Pickering on the 2015 Sony feature “Freaks of Nature.”

Eisler, a Czech-born, English-raised composer, producer and multi-instrumentalist, has worked with ensembles of all shapes and sizes to help bring his scores to life. Variety described his music as “smoky, elaborate film noir-inspired compositions”, while Beatweek Magazine praised him for making “beautiful music” that “…almost acts as another character further enveloping the audience in its grasp.” Eisler has been nominee and recipient of numerous awards including the World Soundtrack Awards New Discovery, SXSW Best Soundtrack Award and multiple BMI awards.

The Three Best PC Games You Should Be Playing