Home » Gaming » Gaming News » Who Are Gamers? A Look at Adult Gamers and the Evolution of Gaming Culture

Geek and nerd culture has changed drastically over the past twenty years. During my time as a student in the ‘80s and ‘90s, those who enjoyed video games, science fiction, fantasy, and comic books were viewed in a very negative light by the “popular” groups and the media in general. What spawned from this viewpoint was conjecture that went unabated by the mainstream until the genres loved by millions turned into a highly profitable industry.

During the mid-2000s an interesting news story appeared on TV. During this segment, the two anchors were discussing the next big cultural movement would hit after the metrosexual trend in male fashion died down. Their opinion was that ‘Geek Chic’ would dominate. Yes, all of the things we loved but were shunned for enjoying would be culturally relevant and widely accepted. Come 2018: superhero films are monumental successes; the video game market is raking in billions; it is no longer a social faux pas to wear a shirt brandished with your favorite sci-fi slogan or character.

Yet, stereotypes and misinformation still abound in certain areas of the media regarding our cherished hobbies. Politicians still call for the culling of violent video games because of a supposed connection to real world violence. Socio-Political commentators contend that game developers and players contribute to sexist attitudes. Gamers themselves are, too, looked at with some negativity simply for enjoying the time they spend in a digital world. Where does the detraction come stem from, though? Are gamers themselves responsible for the stigma? Why is it still a socially acceptable trend to dismiss gamers?

I once again turned to researcher Platinum Paragon for answers. Her recent article ‘Who are Adult Gamers? A Data Analysis’ takes a look at the hobby and those who make up the varied types of gamers. A portion of her article is quoted below. Please check out the full extent of her research and let us know what you think about gamers and the controversies surrounding video games. 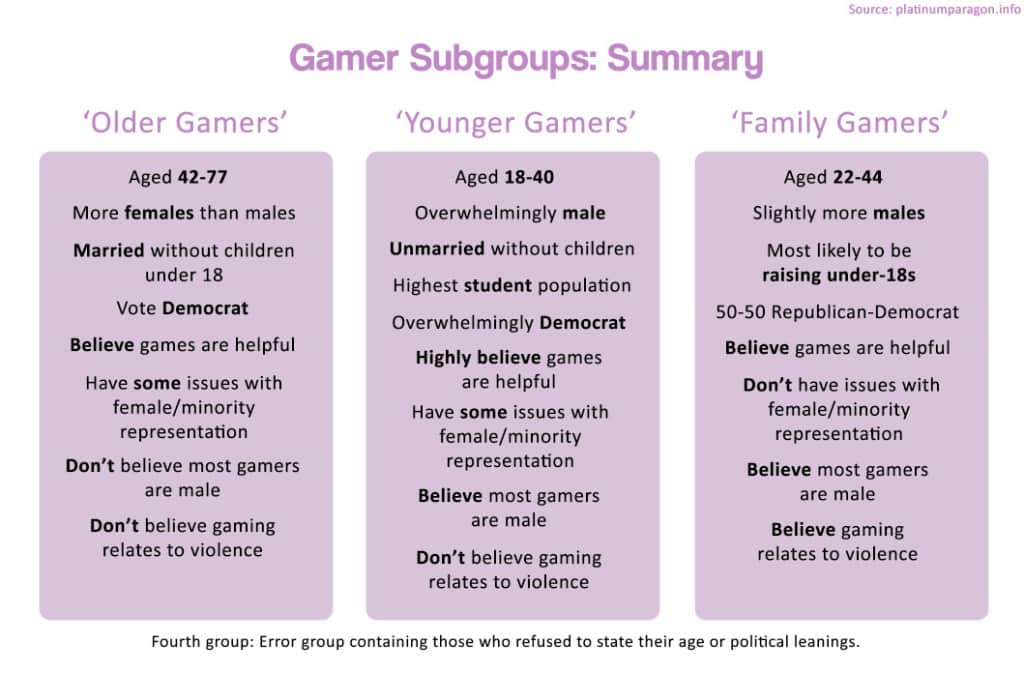 The preliminary analysis found that a wide variety of people enjoy video games, from young college students to parents to professionals. The analysis also found that it may be unfair to consider ‘gamers’ as a homogenous group as subgroups exist within the identity. ‘Older Gamers’, ‘Younger Gamers’ and ‘Family Gamers’ each have their own sociodemographics and gaming beliefs that make them both interesting and informative.

The ‘Older Gamers’ group is the only group to both contain more females and to not believe that most people who play games are male. I have considered two potential arguments for why this could be the case.

The first argument is that these women may have been exposed to the thriving arcade culture of the 1980s, with men and women alike rushing to play popular games such as Ms. Pacman (The History Chasers, 2015). The second argument may involve increased time to explore new hobbies and interests once children have left home. In the interview, participants are asked if they have ‘children under 18 living at home with them’. It is possible that their children have grown up and left home, leaving more free time to discover the fun of video games. Video games would be especially accessible to this population through mobile phones and tablets.

‘Younger Gamers’ also have their share of interesting findings. They are overwhelmingly male and have the most critical opinions for how female characters are portrayed in gaming. However, it is important not to mischaracterise this as ‘young women don’t play games’. We can see from the preliminary findings that slightly more women say they play video games than men, but young women seem to prefer not to call themselves a gamer. It is difficult to say exactly why, but two potential explanations include the stigma of negative stereotyping mentioned above, or the belief that they may not play enough video games to qualify as a ‘gamer’. Regarding the skepticism of female portrayals in video gaming, this appears to be a generational difference as similar patterns of skepticism have been found for female representation in movies (YouGov, 2018).

There may be a history lesson hidden inside the ‘Family Gamers’ group. This group would have been raised in or exposed to the time period of fervent debates surrounding the relationship between gaming and violence. This time period would see video game critics such as Jack Thompson argue that every school shooter is a gamer (Thompson, 2000) and that video games encourage children to enjoy killing (Benedetti, 2007). The idea that gaming is related to real-life violence seems all but extinct in younger generations, but is the majority opinion in this group.

It is interesting to note that while this group still considers themselves to be gamers, they seem to enjoy video games less than the other two groups; 0% of participants felt that most games are more entertaining than television. In the case of Jack Thompson-esque rhetoric about gaming damaging children’s brains, having young children yourself may make this belief more salient, while enjoying video games may minimise it (as seen in the ‘Older Gamer’ group).

Who Are Gamers? A Look at Adult Gamers and the Evolution of Gaming Culture