This post is sponsored by WNET; however, all thoughts and opinions are my own.

Are you a fan of documentaries? I personally geek out over them, and I love to watch them with friends. Throw in a few glasses of wine, and what happens is a really great night of insightful and meaningful conversation. That’s exactly what I experienced recently with PBS’s American Masters, a series that highlights the creative journeys of America’s most timeless writers, musicians, visual and performing artists, dramatists, filmmakers, and those who have helped shaped our cultural landscape.

Before watching this episode of American Masters, I (nor my friends) had ever heard of Eva Hesse (the amazingly talented artist that this episode focused on). However, by the time the credits rolled, I felt like I had discovered a kindred spirit that lived decades before I was born. Her drive to exist outside of what her family and society expected of her, her need to experience all that life had to offer, her love of art…simply put, Eva Hesse is an inspiration. 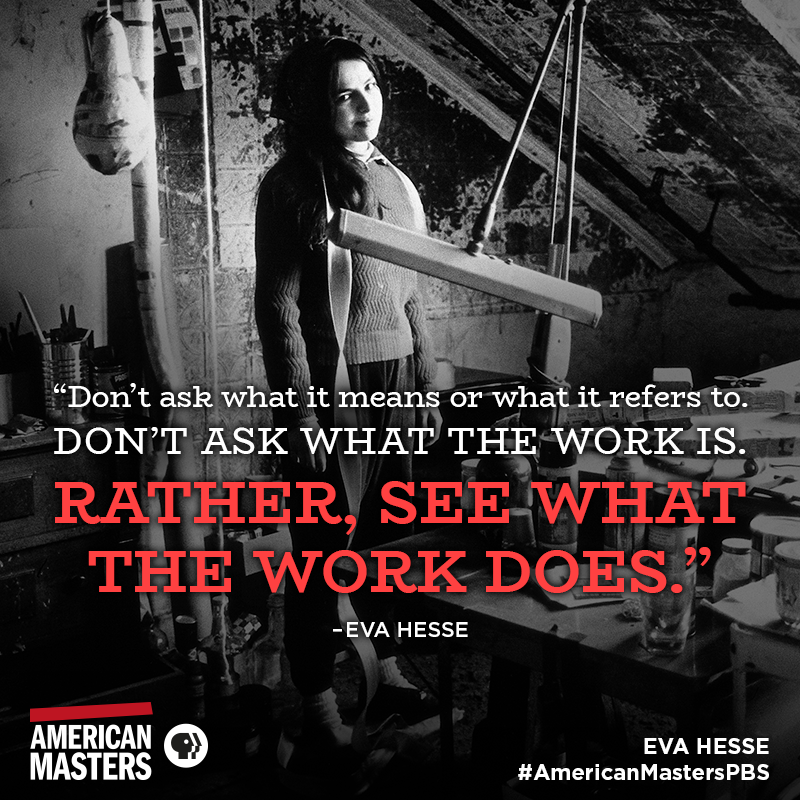 Born in Hamburg, Germany in 1936 to a German-Jewish family, Eva managed to escape the fate that claimed her extended family. Eva and her older sister were sent out on one of the last Kindertransports (these were trains that carried Jewish children to safety). They eventually reunited with their parents in Holland, and then made their way to New York. However, the emotional rollercoaster was far from over for the family, as years of depression took hold on Eva’s mother – causing her to jump from the roof a building, committing suicide when Eva was only 9.

Eva grew up with an intense passion for art, and she would graduate from Cooper Union and Yale School of Art. She made her way back to Manhattan after graduation, and started to receive attention for her abstract drawings.

In the early 1960s, Eva met Tom Doyle. What transpired was an intense whirlwind of a romance that found the pair married 6 months later.

Tom was already established as a sculptor, which brought a fair amount of challenges for Eva to face. Tom was a bit more of a social butterfly, and Eva wanted security – with her childhood being as traumatic as it was – who could blame her?

The challenges continued to mount, and in 1964, Tom found himself with the offer of an all-expenses paid residency in Germany. Going back to the country that held so many painful memories for Eva was a difficult choice – and one that caused her a great deal of anxiety when she decided to follow Tom.

The bright side to this return to Germany is the work that Eva was able to create once she was able to face her past head on. Much of the work that her reputation is based on came from this time spent in Germany. When Eva and Tom returned to the states the next fall, Eva’s work had become 3-dimensional – a blend of paintings and sculpture. Eva’s mixed media began to attract the attention of the art world, but at the same time there was more disappointment- Eva and Tom’s marriage failed.

Eva threw herself into her work after that milestone. She created a massive amount of work across the next 5 years. From sculptures to drawings, her emotions came through in the complicated pieces that she created. And while little sold, Eva received critical praise.

The road of life ended far too early for the artist, who passed in 1970 at the age of 34. She had suffered from headaches for years, but these headaches were a sign of something much more serious – a brain tumor. She managed to have it successfully removed, however the tumors returned – and with their return, they took Eva’s life.

After watching this episode, my friends and I spoke about the source of inspiration that artists pull from (after all both my fiancé and I have art school backgrounds) – whether you’re a painter, musician, actor, dancer, filmmaker, etc… There’s this age-old notion that the best art comes from those that are actively suffering – whether it’s a death of someone that they care about, a failed relationship, wanting to be with someone you can’t, or depression – some of the best art seems to come from pain.

I received both my Bachelor and Masters degrees from art school, and while I went the digital art route – I did get to take a number of fine art classes. This idea of pain tied to art always fascinated me – especially when it came to paintings and sculpture. Do you have to have such intense emotion in order to create something that evokes that same degree of emotion? I’d love to hear from you all – does the best art come from pain?

I think in Eva’s case, her pain was her fuel. She was able to work through her pain by dealing with it directly – with her hands. While her pieces may confuse or confound those not familiar with her backstory, those that are find a certain type of beauty in the complexity of her creations. The fact that we’re all truly misfits, no matter how successful we are. It’s not abnormal to feel different. Being not normal, is in fact normal. Complacency is not where you’ll find beauty, you’ll find beauty with the souls that are brave enough to express and explore the fact that they are different.

Curious about American Masters and Eva Hesse? This episode premieres on Friday, August 31 at 9 p.m. on PBS, and it’s available to stream starting September 1 on pbs.org/americanmasters and on PBS apps.