by rennlark
in Featured, Style 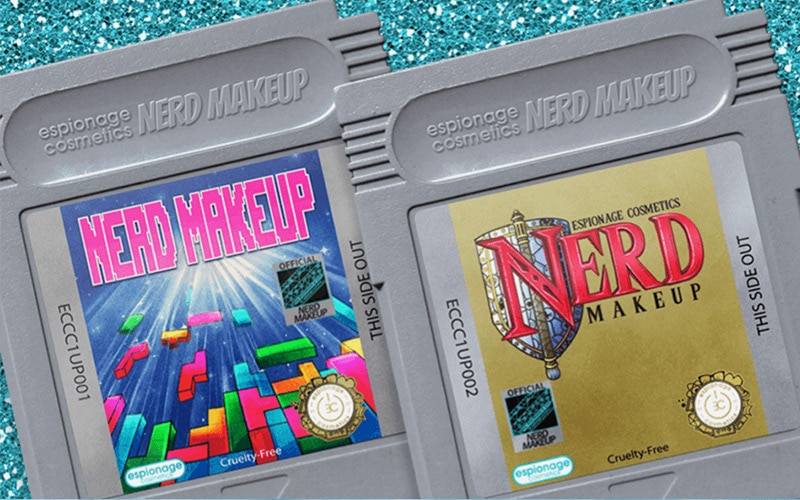 We at FanBolt have been fans of geek beauty line Espionage Cosmetics for a number of years now, but it’s been a few since we had the privilege of sitting down with CEO and Glitter Jedi Jaimie Cordero again. We finally caught up with her at San Diego Comic Con International to see what’s been going on and what’s coming up for one of our favorite brands!

So it has been probably about three years since we’ve talked, how has Espionage changed since then?

Well, we are now the full-time job for 15 other nerds for a living. When you and I talked last time, we did have a handful of contractors and probably two full-timers. That has shifted quite a bit. I think when we last talked, we also discussed our Geek Boutique. The Geek Boutique still exists, we still have buildings. We can’t use it because our shipping and receiving has grown so much. Our HQ is actually not on the ground floor level, so we could only ship and receive things out of there at a certain level. So then we were shipping it out of the Geek Boutique because we were only open for special events. That’s really where we were having a lot of fun – where everybody was traveling in and showing up for like our Hogwarts themed stuff and whatever.

But even that became problematic, because we could not get stuff packed up and sorted out fast enough, because it’s thousands and thousands and thousands of orders, all the time! There’s no way to keep it organized enough that you can then quickly do a shift into a beautiful store.! Not [a way] that’s fair to my team, anyway. So right now we’re waiting for more space to open up around the Geek Boutique and our HQ so that we can take that [space] back for events and celebrations, but also have a ground floor-level Shipping and Receiving facility. We went very very quickly from a couple of hundred orders a month to thousands and thousands. All of this is really good. I’m kind of making it sound like it’s not, but that’s not the case.

Are you thinking about opening another brick and mortar store?

Absolutely not. I think when we went into it, my brain was just kind of set that we had to have this standard “We’re open five days a week for this set amount of hours every day.” And then we learned really quickly that most people were coming in for our events. We’re nerds; we like themed events. We would make all the money in one event that we would make in four weeks, and we’re still pulling in pretty good money at that time. But then, do we want to be keeping the store open that long just so that everyone feels better about themselves – that we’re a “real business”? And no, none of us were about that. It moved into us realizing that we didn’t even have to have [events] every week, or every two weeks, because people were traveling in hundreds of miles to be at them. And so the more specialized, the better it was for everybody else. That’s not duplicatable, basically. That’s going to be a niche within a niche. It’s going to be the special events, like “come hang out with us” kind of space, period. If you see Espionage elsewhere in larger form, it’s going to be at a con, or in a pop-up at another brick-and-mortar store. It won’t be on this level. And then we get to throw themed parties and have fun! 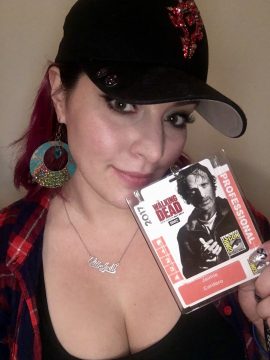 In the time you’ve been in business, how do you think you’ve seen the landscape change as far as fandom and being a female geek?

Well, it’s no longer weird. I mean I can’t say that we had a ton of people saying, “Why are YOU guys here? Why is makeup even here?” But I don’t feel like we have to fight as hard to explain to people why this makes sense. I don’t have to have as many conversations about how the market breaks down and why it matters. I have more conversations with muggles about why than I do with nerds. Where I have to explain, “you guys understand that you’re seeing all these Avengers movies and Harry Potter spinoffs and everything in Target is covered with Hogwarts house everything for a reason. It’s not just because some nerd was the buyer. They don’t make those decisions with their hearts because they love the thing and they grew up with it. They have numbers and data points. And they are doing that because it makes money. That’s where the market is going, so maybe we stop acting like it’s so weird.”

We’re seeing a more grown-up version of being a nerd. Because before, and even still now, a lot of people associate being a nerd with childish, immature things. You liking Star Wars and you being grown up have nothing to do with each other. My friend Allison from RockLove Jewelry puts it the best. She says that we need to all stop repeating this “oh, I’m adulting today!  Like I’m a grownup, look at me in my Star Wars shirt!” because that’s perpetuating the idea that those things have anything to do with each other. Being a grown up is that you pay your bills, and you are respectful of the other people around you. That is it. Everything else is just living your life. And she’s absolutely right.

Seeing things like the Her Universe Fashion Show. I’ve watched five years of the evolution of that. At the beginning of it, most of the stuff that you saw, if you look at the videos, they were very like cartoon-y, very direct. Everything that came out, for the most part, in all of those designs was just an exact replica, almost, of that thing. If they were doing something for Doctor Who, it was a TARDIS dress, or it was a Dalek dress. As things have progressed over the last five years we’re seeing things that could legitimately be couture. It’s what I would call “muggle-friendly fashion,” where the muggles who are not into any of this stuff would be like, “that is amazing and you look amazing in it and need to know where you got it from because I want to get one.” And then the nerd on the other side of the muggle is like, “oh my god, is that Godzilla?” It works for everybody, and that has legitimately started happening over the last 18 months. That only happens when a market starts to mature. Because it starts to get out of that like cartoony phase and it starts to get more streamlined. And that’s really, really exciting.

Finally, what’s coming up for Espionage? What’s coming down the pipeline that you can talk about?

It’s a thing that myself and our Lead Designer Amanda, who’s been like the longest standing employee at Espionage, that we said as an inside joke and then it became a thing. 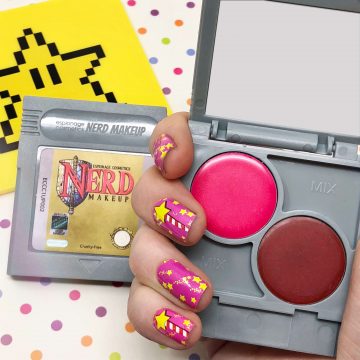 So, the cartridges are going to be launching to the public in hopefully the next month and a half. They did go viral when we put them up for pre-sale. We put them on presale I think in December, and we’re SO close. I think in the next couple weeks, we’ll actually be able to ship everything. [Update: Pre-sale orders have shipped! Head to the site below to sign up for alerts when the cartridges go live for sale.]

I am excited about actually being able to sell them on a consistent basis when we’ll have them in our hands. And really focusing on like building out that particular line, with options like the lip blushes and the eye shadows. We’re working on crème highlighters. And we’re working on a really really really really big licensing thing. Like, when I started the company, this was the number two on my list. And they contacted us last year after I did a panel at New York Comic Con and were like, “Hey y’all! You wanna license?” They have been incredible. And we’re almost there. We’re so close. We’re like wrapping it up . And then, all hell is about to break loose in nail wrap form! I’m so excited! So yep, that’s what’s coming up!

I’ve had the opportunity to hold one of the new cartridges in my hand, and y’all, the geeky nostalgia factor was high. I can’t wait to see what else is coming out in this line, not to mention the new nail wraps and licensing!

Make sure to check out the products from Espionage for yourself at espionagecosmetics.com! We certainly will!