‘The Great Buster: A Celebration’ Review: A Love Letter to One of the Great Directors/Actors of Our Time 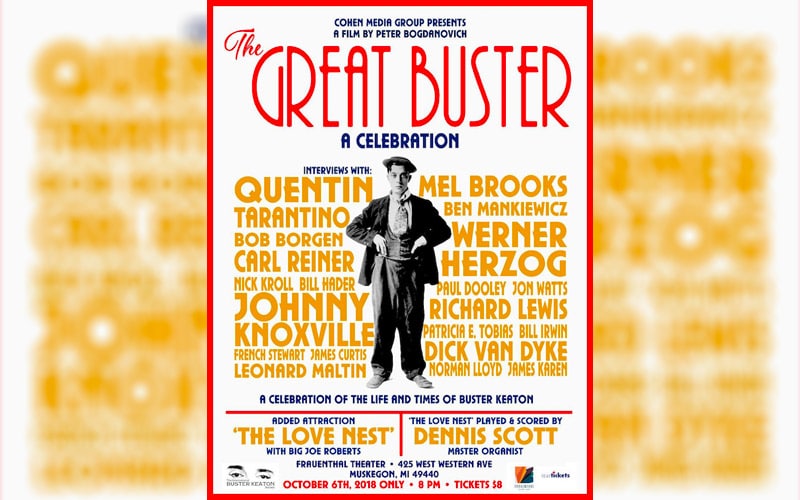 In ‘The Great Buster: A Celebration’ director Peter Bogdanovich brings us a joyous look at the magnificent Buster Keaton, the legendary silent film star who created some of greatest motion pictures of all time. Bogdanovich started his career, before becoming an award-winning director, as a film historian and his love of cinema and of Buster Keaton shines throughout the film.

Keaton was literally born into the stage where his parents were stars on the vaudeville circuit. They became bigger stars, commanding 750 dollars a week in the 1910s when at a very early age Buster joined the act. Buster became famous in the act for being thrown about by his father across the stage. This happened so much that a handle was attached to his clothes so his father could easily throw Buster further and the film shows that his father was arrested for child abuse on numerous occasions, but never convicted. By the time that Buster was 10 years old, he was the star of the show,

When Buster was 21 his life changed when he by chance met up with fellow vaudeville star Roscoe ‘Fatty’ Arbuckle, who convinced Keaton to quit the stage and start making movies. Keaton made a number of short films with Arbuckle, before headlining short films that he wrote and directed.

At the height of his fame, Keaton switched studios, going to MGM, where he didn’t have the independence that he had earlier. No longer writing or directing his films, the movies he stared in the 30s were a shadow of what he did earlier. Also, not in his favor, sound was introduced into cinema and the pantomime performances that Keaton was known for became out of fashion.

Combined with an unhappy marriage and alcoholism, Keaton became a depressed person, finally suffering a mental breakdown that left him hospitalized. Keaton finally found happiness in the forties, marrying Eleanor Norris, an MGM dancer and his third wife, who he remained married to until his death. Keaton found renewed fame in the 50s and 60s due to television, appearing on numerous variety shows and in a ton of commercials that used his considerable talent to showcase products.

Bogdanovich is obviously a fan of Keaton’s work, and it shows how lovingly he narrates the film. Using interviews with fans and friends of Keaton’s work such as Carl Reiner, Dick Van Dyke, Richard Lewis, and Mel Brooks, the film shows how much an impact that Keaton made with his movies and with his friendship. Comedian Richard Lewis lovingly shows a hat that Keaton’s wife, Dolores gave him, celebrating the hats that Buster wore in his films.

One of the more interesting facts that I learned from this film is that when Buster was making those great films in the 20s, he didn’t have a script. He would write out a beginning and an end, but the rest of the movie would be improvised on the set. Keaton also used audiences to refine his films. He would screen films in front of an audience to get their reactions, often reshooting scenes to perfect the film with help from the feedback. Bogdanovich’s film showcases a Keaton film, ‘Our Hospitality’ whose ending was radically changed when Keaton showed it to an audience and got feedback that the film lacked a suitable ending. Keaton went back and re-shot the ending with one of greatest shots of all time, a humorous scene where he is avoiding boulder after boulder as he tumbles down a steep hill.

The film does a great job of highlighting the films during Keaton’s peak years, looking in depth at the feature films that Buster made in the twenties, not just looking at his great films, such as ‘The General’ and ‘Sherlock, Jr.’ but also his lesser-known films such as ‘Battling Butler’ and ‘ The Navigator.’

I am a big fan of Buster Keaton and laughed throughout this film. ‘The Great Buster: A Celebration’ is just that, a celebration and a master class on one of the greatest filmmakers and performers the cinema has ever seen. Even if you don’t know anything about silent film, this is a film that will have you in stitches from the first frame until the end.

Tags: The Great Buster: A Celebration

Michael McKinney graduated from the The University of Texas at Austin with a bachelor’s degree in Film. Michael has worked in television for over 30 years at stations in San Antonio, Dallas, and Atlanta. In 2011 he founded his weekly review blog Last One To Leave The Theatre and also became the film critic for WUPA-TV’s website ATLCW.TV, writing Preview This! a weekly look at movies coming out and long-form reviews of film concentrating on Indie films. Michael also writes long-form reviews and does interviews for the FanBolt.com website. Michael co-hosts the weekly ATLas podcast with Shakefire’s Matt Rodriquez and FanBolt’s Emma Loggings where they review movies, talk about the weekend box office and discuss local film events happening in Atlanta, GA. Michael has covered the L.A. Film Festival, SXSW Film Festival, Austin Film Festival, Atlanta Film Festival, Macon Film Festival, Savanah Film Festival, and the Rome International Film Festival.

'Outlaw King' Review: Spectacular Looking Film That Is Let Down By Its Script