Fans of Ellen Degeneres know that she is hosting virtual interviews from her home during the COVID-19 pandemic. Her latest guest was Jason Momoa which was really a treat for all of us. He discussed everything from life in quarantine to his upcoming film, Dune.

In terms of quarantine, he’s enjoying time with his family. From rock climbing and skateboarding to physical education – he’s sort of the ideal gym teacher. Other subjects, however, he says aren’t really his thing. Ellen brought up that Momoa is a meme encouraging everyone to stay healthy during the quarantine. 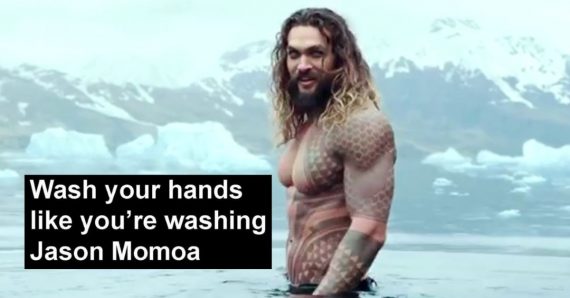 Momoa then admitted that he’s not huge on “working out”, (even with that killer physique) so Andy gave him some tips. A nice slow walk with 2 lb weights on each arm – that should do the trick.

When discussing Dune, Momoa’s face lit up. His excitement for the character he plays is evident as he talks about Duncan Idaho.

“I get to play this character Duncan Idaho, who’s kind of a master swordsman who’s made the right-hand man to Duke Leto who is Oscar Isaac. He’s the first person to be sent out to land on Dune and that’s when I meet the character that Javier Bardem plays. I can’t believe I had a scene with Javier Bardem! It’s a pretty massive film and I get to be this little — he’s kind of the Han Solo-esque of the group. He’s this rogue warrior who protects Timothée Chalamet (Paul Atreides) and serves Oscar Isaac.”

In terms of the film, Momoa said he’s never been a part of something quite so big. If you think about it, that really says a lot about what fans can expect when Dune hits theaters. Momoa was part of Game of Thrones and plays DC Superhero – Aquaman. Those are big projects. This being bigger…well, that’s huge.

“We got to shoot in Wadi Rum. I’ve never seen anything like it, it was like shooting on another planet. Denis Villeneuve is shooting it, who made Sicario and Arrival. It was an honor to do that with him, and it’s a pretty stellar cast, I’ve never been a part of something so big.”

You can catch the rest of Jason Momoa’s interview with Ellen in the video below. There are plenty of laughs, he shows a big of memorabilia from sets, and he jokes about his new role as a PE Teacher from home.

Dune is slated to hit theaters this December.