Reese Witherspoon has expanded her film talents beyond just acting; she’s taken on the role of executive producer, soundtrack performer, and writer. And while there are plenty of Reese Witherspoon movies and TV shows worthy of recognition, we’re going to focus on the top 10 from her career.

From winning an Academy Award for Best Actress, an Emmy for Outstanding Limited Series, and BAFTA for Best Performance by an Actress in a Leading Role, Witherspoon has certainly made her mark on cinema.

Let’s take a look at the best of the best from Reese Witherspoon’s career! 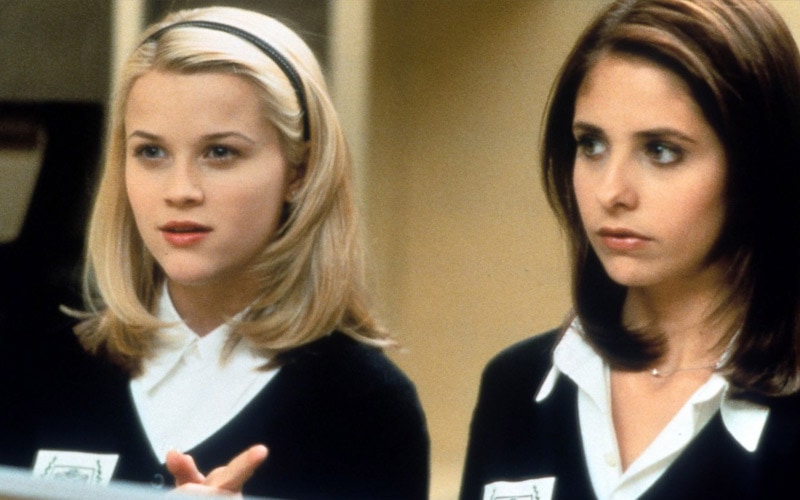 Reese Witherspoon stars as Annette Hargrove, a young woman who plans to stay pure until marriage. Two step-siblings set a plot in motion as the wager who can “deflower her” first.

Starring alongside Matthew Broderick as teacher Jim McAllister, Reese Witherspoon plays Tracy Flick. Tracy sets ethics aside when she’s set on pursuing something she wants, and running for school president is no different. McAllister sees this move as potentially harmful to the student body, so he backs a different candidate, sparking a feud between McAllister and Flick.

Unbeknownst to Evelyn Williams (Reese Witherspoon), her fiance Patrick Bateman (Christian Bale) isn’t the mild-mannered professional she believes he is.

When he isn’t making millions in the office, he’s a full-fledged psychotic serial killer.

7. A Wrinkle in Time

Witherspoon stars as Mrs. Whatsit, an astral traveler alongside Mrs. Who (Mindy Kaling) and Mrs. Which (Oprah Winfrey). They help young Meg Murry (Storm Reid) and Charles Wallace (Deric McCabe) go on a journey to rescue their father throughout the universe.

Starring Reese Witherspoon, Jennifer Aniston, Steve Carell, and Billy Crudup, this Apple TV Drama follows the politics of a popular morning television broadcast. Following the firing of her co-host due to a sexual assault scandal, Alex Levy (Jennifer Anniston) must share the airways with Bradley Jackson (Reese Witherspoon). Everyone schemes behind the scenes as they all grapple for power on the airways and in the network.

At only 14, Reese Witherspoon starred in Man In the Moon, the very first of many Reese Witherspoon movies. She played Dani Trant, a young girl in the middle of her coming of age story. Set in rural Louisiana in the 1950s during Elvis’s peak fame, we watch Dani as she falls in love with her neighbor as she navigates life with her family.

Reese Witherspoon played the main character – securing a nomination for an Academy Award for Best Actress – and produced Wild.

It’s a tale of a woman named Cheryl Strayed (Reese Witherspoon) spiraling after losing her mother Bobbi (Laura Dern). To cope with her self-destructive mourning and the end of her marriage, Cherly decides to get her life back together by embarking on a backpacking trip through the Pacific Crest Trail. With zero experience, a backpack, and determination, she’s on her way to find herself on one of the most difficult trails in the US.

Reese Witherspoon stars alongside Joaquin Phoenix as June Carter Cash and Johnny Cash in this biopic of the famous country star.

Witherspoon won an Academy Award for Best Actress when portraying June. She even did all the singing for the character. On having to sing, Witherspoon said, “At first it kind of felt like [I was] lost and set adrift. First of all, I didn’t know I was singing…[Joaquin] and I went into that with a lot of trepidation, particularly him. He was playing an icon that had such a recognizable voice. And me, I am just a perfectionist and totally afraid of stinking (laughing). So we went into it and I was just determined to get the right coaches and the right people.” She even ended up playing the autoharp as well!

Reese Witherspoon both starred in and executive produced this incredible series based on the novel of the same name by Celeste Ng.

She co-stars alongside Kerry Washington and they both give incredible performances in two diametrically opposed roles. The mini-series touches on weighty topics such as racial identity, racism, socioeconomic status, classism, poverty, motherhood, infidelity, artistic expression, homophobia, and more. It’s about the guise of perfectionism and how your world can come crumbling down at the light of a match.

It’s a difficult series to watch, but the powerful message is absolutely worth becoming uncomfortable.

Legally Blonde is a fluffy, pink, feminist manifesto that stars Elle Woods as she discovers herself on a journey to becoming a lawyer. It’s a story that showcases women accomplishing incredible feats without sacrificing what makes them “girly.”

After getting dumped by her boyfriend, Delta Nu president Elle Woods decides to follow him to Harvard Law School to get him back. She studies up and gets accepted.

At first, she’s completely focused on just winning Warner back, but overtime realizes she’s a damn good lawyer and finds her calling in the legal realm. She solves a huge celebrity case not in spite of her femininity but because of it.

Legally Blonde went on to become a hit Broadway musical and paved the way for multiple sequels in the franchise.

So what do you think? Did your favorite of the many Reese Witherspoon movies and TV shows make the cut? Do you think she performs better in the romantic comedy genre or drama? She has a whole lot of projects currently in production, so we’ll certainly see more content with Reese Witherspoon in the lead role in the next few years.

Let us know which of your favorite Reese Witherspoon movies and TV shows made the list!