Games these days try to put a focus on their stories. Telling a good tale often takes precedence over gameplay. However, many times this is a game’s downfall. Pretty graphics and celebrity voice actors can only go so far when making a compelling video game. Luckily, Spike Chunsoft breaks these trends with Danganronpa: Trigger Happy Havoc, and brings one of the most gripping stories in gaming to the Playstation Vita while succeeding in all aspects.

Murder mysteries in games are hard to come by, so Danganronpa is a refreshing experience. The game’s setup is both simple and brutal. Fifteen of the most gifted teenagers in Japan arrive at a Hope’s Peak Academy, a high school for the best and brightest. These characters include the top baseball player, pop star, and fashonista. However, the player character, Makoto Naegi, has no such talents. Nothing at all makes him special- except for how average he is. He only got into Hope’s Peak by a lottery. 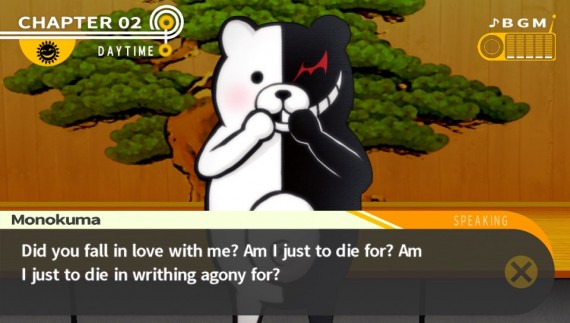 However, Makoto makes a great protagonist and has his own personality. In the game, Makoto interacts with the other students and makes bonds with them during gameplay in Daily Life. Events unfold before you and the story develops. After these events, Free Time occurs, allowing Makoto to spend time with whoever he chooses in conversations akin to Persona’s Social Links. These allow you to learn more about the other students, and are very pleasant to behold. The characters in Danganronpa are fleshed out and have vivid personalities.

These personalities are brought to life through great voice acting. While it’s hit or miss, most of the characters in the game (like Hina and Taka) have spectacular voices that suit them well. Others (such as Sakura or Monokuma) don’t get the same treatment. Another gripe is that outside of the Class Trials, the characters are not fully voiced and usually have fewer than twenty lines each. Hearing the same phrases over and over can get stale very quickly. For those who don’t want to subject themselves to an English voiceover, the Japanese audio track is selectable at the start of the game. 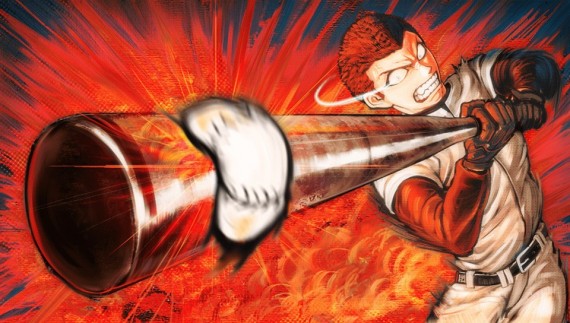 One of many things Danganronpa prevails in is its soundtrack. It features catchy beats and doesn’t ever get old throughout the game.  Every song fits the moment perfectly and adds to the experience. Despair-inducing scenes are met with somber pianos and violins. Happy moments are met with jazzy tunes. The game also looks sharp on the Vita. Every character design fits their respective archetype and personality, and the school itself looks great as you traverse through it in first person view.

Everything seems good and well at Hope’s Peak, right? Well, it’s not. There’s a deadly twist to the situation that turns the whole story on its head.

When the students enter Hope’s Peak for the first time, they are knocked out. Upon waking up, they meet the bane of their existence- a monochromatic bear named Monokuma, who proclaims himself as the principal of Hope’s Peak. He lets the students know that they are trapped in this school, and are set to live there… forever. There is only one way out of the school- kill a student and don’t get caught. 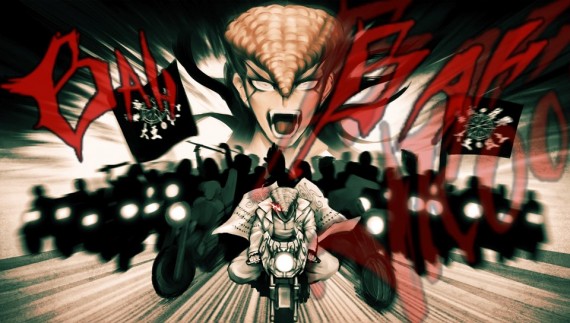 This horrible situation creates anxiety for the students, and eventually a murder takes place. At this point, the game shifts from Daily Life to Deadly Life. In Deadly Life, the first thing that takes place is an investigation of the murder. These investigations are very easy, and the other characters heavily guide you through them, providing hints every step of the way. This wasn’t too much of an issue, but it would have been nice for the player to have been given more control.

After the investigation, the students hold a Class Trial with Monokuma playing the judge. These work similar to Ace Attorney, but they are much more fast paced. The first phase of a trial is the Nonstop Debate. In these, the player uses Truth Bullets- evidence found in the investigation- to strike down contradictions in the other students’ statements. The trials are constantly moving, and you need to pay attention and think carefully to shoot the correct statement. After a Truth Bullet counters a lie or slip-up, there is a break where the students discuss what really happened. Class Trials also contain various minigames, including beat-matching, hangman, and a final sequence where Makoto puts together an outline of the whole case in the form of a comic. These Class Trials are engaging and last a long time while never letting up the excitement. 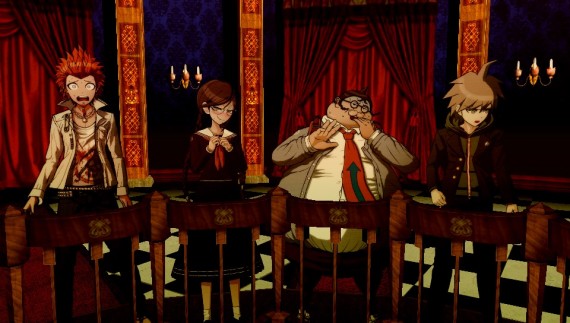 The game’s plot is extraordinarily good. As the game goes on, you get to see clues in order to solve the mysteries of Hope’s Peak Academy. The game often uses these as cliffhangers between segments to keep you hooked, and they work to great effect. For the time I played Danganronpa, it rarely escaped my mind. There’s twists at every turn and they all were more surprising than the last.

Danganronpa: Trigger Happy Havoc is a fantastic example of good storytelling. It proves that visual novels still excel and that mysteries can be just as good in video game form. It features an excellent localization with goofy writing while simultaneously delivering the best murder mystery in gaming since Virtue’s Last Reward. This is one of the Vita’s finest games, and does not deserve to be missed.