Monster Monpiece is this bizarre hybrid of lane-based strategic combat and card collecting. It actually works amazingly well and can be quite a bit of fun – as well as a decent challenge. The problem is that it’s a little too heavy-handed (okay, it’s actually really heavy-handed) with the, ah, girly bits.

The world is comprised of two main groups: humans, and monster girls. There’s some hoopla about a goddess and punishing hubris, punishing more hubris, things go south for a bit, and then everyone is living in harmony. For the most part. There’s the looming threat of “lost” humans and monster girls roaming the countryside, but that won’t have any affect on-oh, wait, there goes one of the main characters. Aaaaaand now we’re off on a quest to save her. Right on schedule. 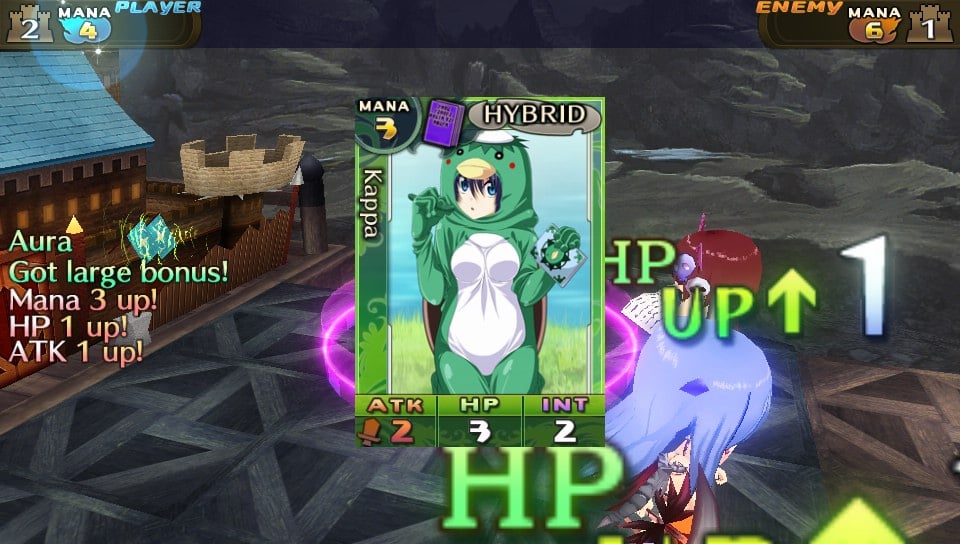 The story for Monster Monpiece isn’t particularly bad or anything, but it’s also not very interesting. It’s a backdrop for the gameplay: and excuse to toss cards down on a grid and watch the summoned monster girls duke it out. It gets the job done, although I wouldn’t mind having the ability to skip the story segments as they tend to drag.

Actually playing Monster Monpiece is far more interesting. The different cards you collect represent different monsters (ghosts, dragons, kobolds, etc) that have been hybridized with attractive ladies, because of course. Each card has its own stats for attack and health, with some more attuned to damage and others better for support.

Once you’ve placed a card by paying its cost from an energy pool that recharges every turn a monster girl will appear, then work her way across the board to your opponent’s castle. If you manage to hit the other castle enough, you win. And if your castle takes enough hits, you lose. 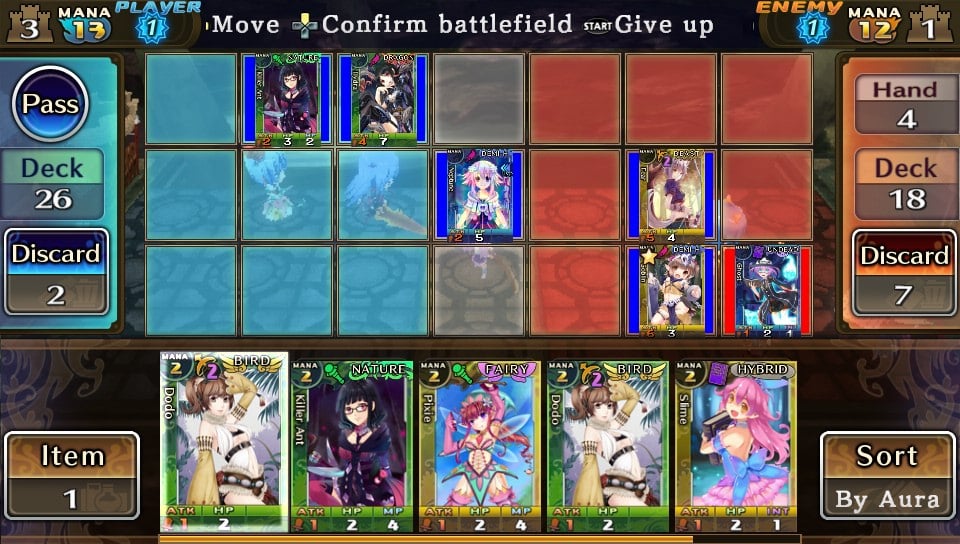 That’s just the basic idea, though. There’s actually an awful lot of nuance to the game that involves being able to temporarily combine cards from the same species (for example, two Nature cards) for a stat boost, playing multiple cards of a matching color (not necessarily the same type, either) in succession to generate a bonus for all your active monster girls, utilizing special skills that will only activate if you have enough mana to pay for them in addition to the cards base summoning cost, etc. It’s a lot more strategic than it appears at first glance.

Improving your cards is where things start to get weird. Rather than simply dumping points, money, or other cards into one you want to beef up, you’ll have to spend “Rub Points” in order to get some… quality time… with the monster girl in question. You’ll then have to poke, prod, and rub all over the monster girl’s portrait in order to build up her happiness. And if you manage to get her excited enough you can then rub the Vita vigorously (both the front and back screen at the same time) in order to speed up the process and possibly earn some bonus stat points. Fair warning: this is probably not the sort of thing you want to be doing in public. 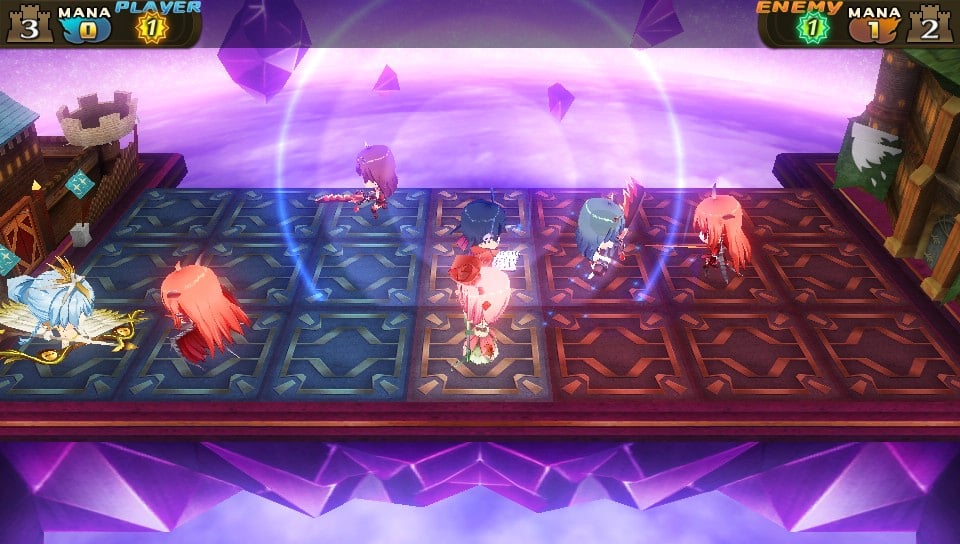 The core gameplay of Monster Monpiece is actually quite a lot of fun and can be a welcome challenge. The problem is you have to fight your way through an ocean of unnecessary cleavage and what can best be described as “Vita stroking” to enjoy all of it. Assuming you can look past the headache-inducing innuendo, there’s actually a pretty cool game for you to enjoy.