Judging almost anything by its cover is usually discouraged, and board games are no exception. The thing is, it’s usually possible to at least get an idea of what a board game is like by looking at the box. Not so much with Fleet Admiral. Despite the oddly-shaped cards and the clean-cut science fiction theme it’s actually a very simple and accessible “push-your-luck” game at its core. Although it’s buried in a bunch of clever systems that are impeccably balanced.

Fleet Admiral is a very simple game to look at. The box art is minimal, the cards feature a few icons and not much else, and the most detailed thing on any of the player cards is the drawing of their ship. The almost sterile look of everything actually fits the theme quite well, though. It really calls to mind a universe filled with Starfleets and Kirks/Picards. 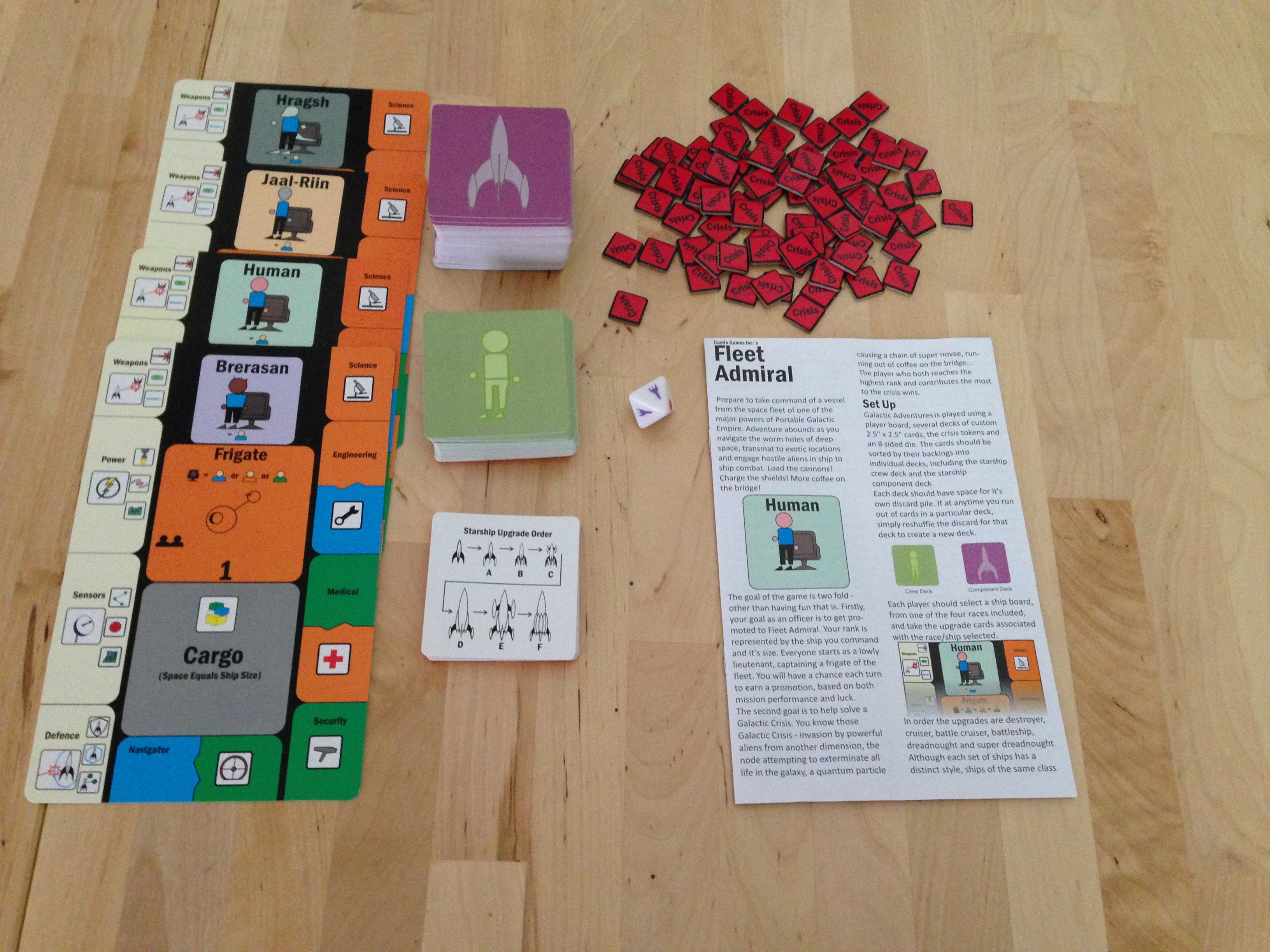 All the various elements (player cards, crew/component cards, upgrade cards, Crisis tokens, mission die, and instructions) are nice and compact, which means the box won’t take up a lot of space on your shelf. I did run into an odd issue with the manual being just a fraction of an inch too large in either direction and ended up having to trim it down myself to get it to fit easily. That was kind of weird. I’d noticed that the printing on mission die was also off – not a deal-breaker but irritating all the same. And the cards themselves could probably have done with a touch more personality just to liven things up, but I’m more bothered by their odd dimensions (2.5” X 2.5”). They’re just such a pain to shuffle!

Fleet Admiral plays from one to four players, although it’s significantly more fun when playing with others so I’d advise against going solo if you can avoid it. Each player begins with a player card (the only difference is the race of their captain and the look of their ship), two level-1 components, and one level-1 crew. Each turn consists of rolling the mission die in order to determine which deck to draw from (crew or components), and then drawing a card from the proper deck and seeing if you can complete it. And all that takes is having the right resources available on your ship – stuff like a green crew member or shields. 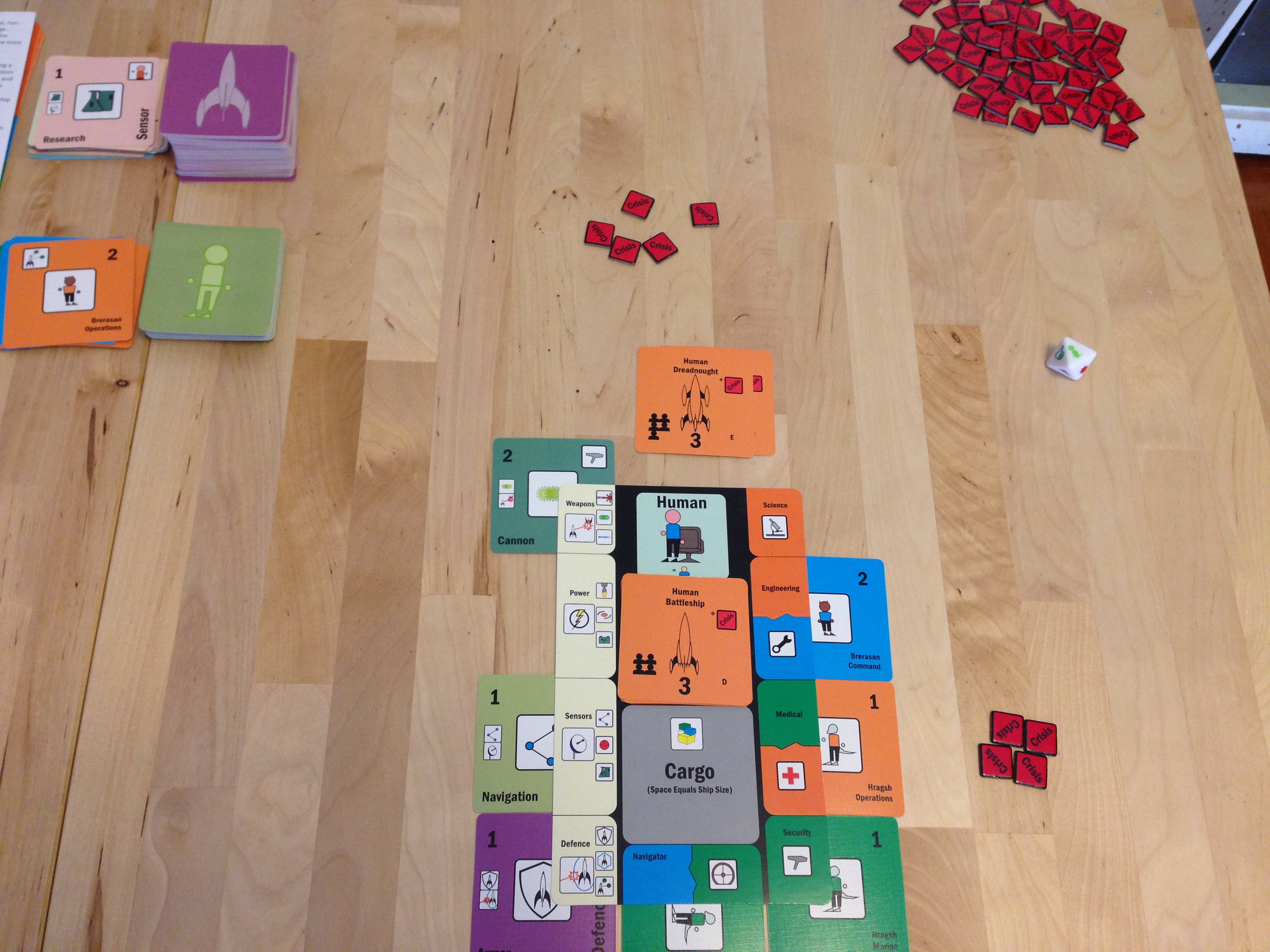 If you can complete the mission you’ll have to decide if you want to end your turn there or try another one. If you end your turn, you earn the card and can attach it to your ship, put it in your cargo hold for later, or possibly trash it in order to upgrade your ship. If you decide to keep going you’ll have to roll the mission die again and attempt another mission, minus whatever resource you’ve already used to complete the first mission. If you fail, or roll a Failure on the mission die, you lose everything you’ve earned on your turn and the mission die immediately passes to the next player. You may accept help from another player when attempting extra missions, but they’ll get first pick from your winnings so you’ll want to keep that in mind.

It’s very simple ti pick up and play as most of Fleet Admiral’s gameplay involves comparing icons. But what I’ve really come to appreciate is how much the pace changes once the Galactic Crisis is triggered. 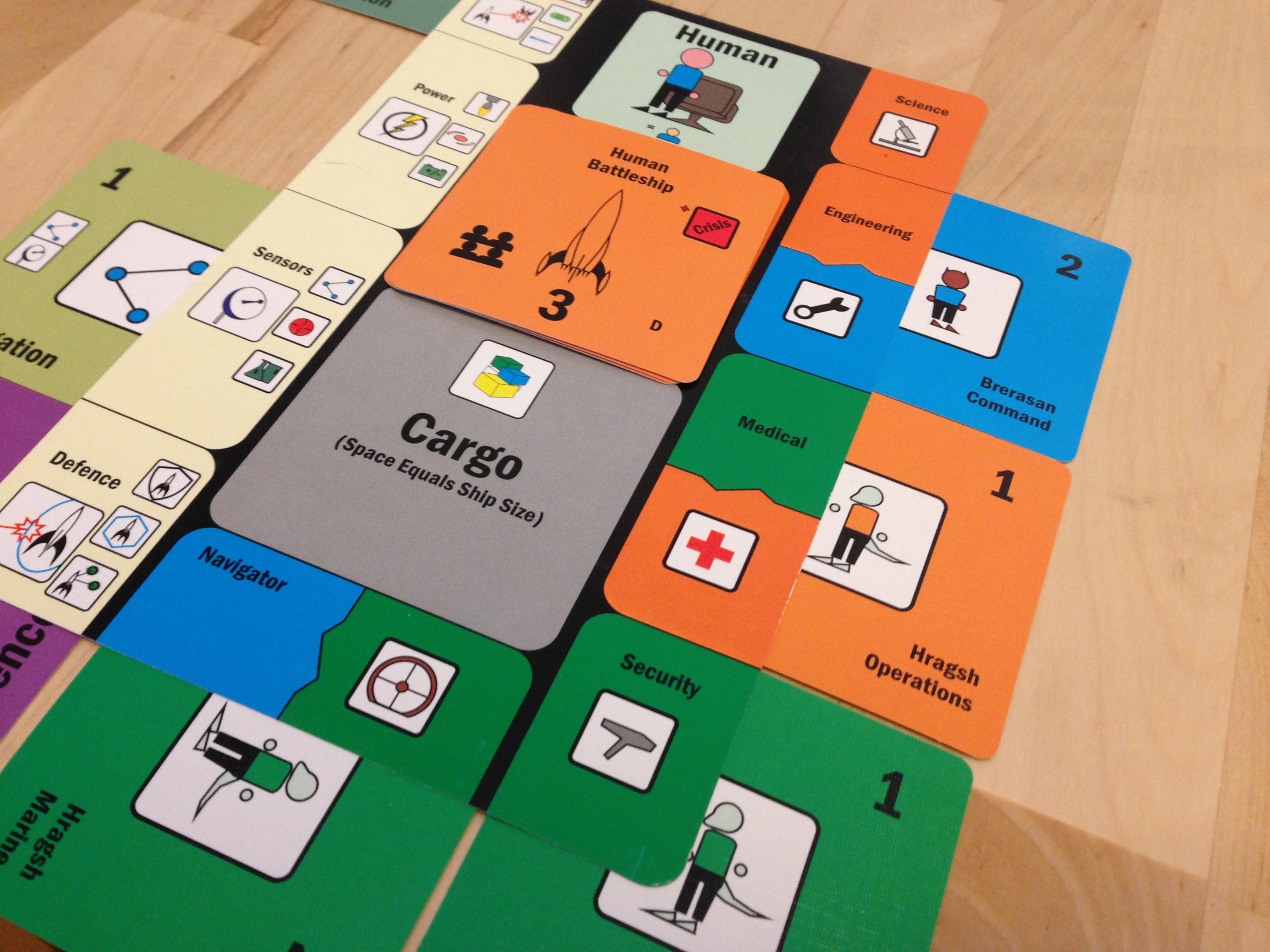 The moment a player manages to upgrade their ship to a size 3, the Crisis begins. From that point on, any time a player with a size 3 ship begins their turn they’ll have to place a Crisis token in the middle of the play area. If the number of tokens gets too high, everybody loses, but if a player manages to collect ten tokens by scrapping cards from completed missions or from their cargo hold, then they and they alone will win. So either one person wins or everybody loses. It’s a bizarre sort of semi-co-op, semi-competitive affair that actually works incredibly well. It’s also interesting just how well balanced this portion of the game is: only the players who have upgraded to a 3 or higher can add to the crisis or remove tokens from it, but nobody can touch any tokens until a certain number have been piled up. This means that rushing to be the first to size 3 is somewhat futile since, even if you manage it, you’ll still have to wait a while before you can do anything about the Crisis.

As a solo game, Fleet Admiral is okay but nothing to write home about. With two or more players, however, it’s an absolute blast. As long as nobody in your group is opposed to playing push-your-luck games, it’s definitely something you should consider adding to your library.