‘Sharknado 2: The Second One’ Cast Talks Celebrity Cameos and Why the Franchise Is So Popular 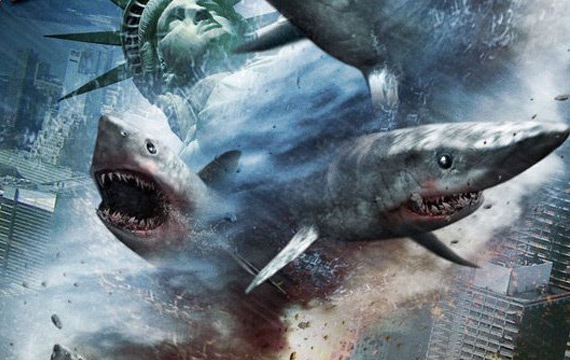 Sharknado 2: The Second One premieres tonight on Syfy and FanBolt has some details from the cast on what celebrity cameos to expect, as well as why they feel the movie has gained such a massive amount of popularity.

Stars Ian Zierin, Ian Ziering, Tara Reid, Vivica A. Fox and director Anthony C. Ferrante recently spoke about the film. According to Syfy, Fin and April are back as a freak weather system turns its deadly fury on New York City, unleashing a Sharknado on the population and its most cherished landmarks.

See what the cast had to say about the overwhelming amount of celebrity cameos, as well as why they feel the movie has become such a cult hit.

Vivica Fox: “… we had Matt Lauer, gosh, Kelly Ripa, Michael Strahan, and lots more that you have to stay tuned to see.

Anthony C. Ferrante: Judah Friedlander was one of the people that did the – was one of the big Twitter followers that night who’s from 30 Rock and he was writing some really funny stuff.

We kind of became friends with him and he really wanted to be in the second movie and he’s one of – he actually was only hired for one line in Sharknado 2 and I called Judah up and going, I don’t want to waste you with one line. If we can give you a bigger part would you do it? He’s like, of course.

So we actually – we combined three characters at the ballpark into one character so we could keep him around a little longer in the movie. But a lot of the film was we would get calls, like, the night before going, this actor’s available, let’s put him in the movie. And like, okay. And then suddenly you’re writing something for that actor.

You don’t have – you can’t pawn off not getting what you did that day on Day 70 because you don’t have a Day 70. So it’s always – here we are, this is what we got, let’s make some magic.

And that includes we have a new actor that showed up and we don’t have a part, let’s write a part for them because I always wanted the cameos to be integrated into the film, not just be somebody random that gets killed. Not that we don’t do that, but I wanted as much as possible to give all these people characters.

On why the franchise is so popular:

Anthony C. Ferrante: You know, there’s a lot of theories about it but I think that a lot of genre movies – and I’ve done a lot of them as a director, writer, you know, they’re just horror films you have, you have a base audience. You know there’s a certain amount of people that are going to watch them whether it’s DVD, on Syfy, BluRay, on demand, whatever. There’s that core audience that will seek this stuff out.

We had a core audience for this movie but somehow the mainstream became attracted to it. We had the sports community embracing us and we really didn’t have any sports elements in the first movie. We had families getting together, watching it with their kids. We did not set out to make a kid movie but there are a lot of kids that love this film because it had sort of that 11-year-old spirit.

So I think what happened was that it’s just – there was something silly about the title and it seemed ridiculous but when you saw the trailer it was – it looks like the big studio movie or trying to be. And so I think people were – wanted – we were daring them to watch it to see if we could fail and yet we kept delivering every ten minutes with some big action set piece.

So you can’t – it’s so hard to get something like this and you can’t really take it apart and say it was this or that. It’s just, you know, we somehow – we were this fun little film that people didn’t have to spend $50 million – $50 at a movie theater to go take their family to.

They get to watch it in the privacy of their home and they had a blast. They made fun of it. They loved it. They hated it. I mean it was just – it was great.

On the cast’s favorite kills:

Ian Ziering: Yes, I like the shark kills most where I anchor myself to the ground and allow the sharks to literally pass through the blade. You know, that’s something that I did in the first movie where it was completely unrehearsed and Anthony has us running through a parking lot.

He says, okay, I need you to jump around and there’s going to be sharks flying out of the sky so leap and jump and dodge sharks flying.

And I didn’t know what to expect but knowing that they would probably paint in the appropriate reaction there’s one moment where I just got on one knee and I raised the chainsaw into the air and they, you know, hit it out of the park. They had a shark fly through that.

In the second one, working with a chainsaw that is 45 pounds, you know, swinging a chainsaw through the air is a little bit more challenging. So when I stood on top of the fire truck knowing that there was a shark flying at me I thought this would be another great opportunity.

But this time I did it backwards. And Anthony says, what the hell are you doing? It looks so phallic. But when we painted the shark in it’s such a beautiful kill. It really is.

Anthony C. Ferrante: It is a fantastic moment. Yes, we called if the phallic shot. Wow, it was great. They did – that was one of the – that’s probably one of my favorite kills in this movie that – the animator, (Dennis) who did it, just – he originally did one pass on that where it was just kind of similar to the first movie and he got obsessed with the anatomy of a shark.

And he found a half shark, like a plastic one that showed the full anatomy. And he used that as his inspiration so you get that really clean thing. And he just made a beautiful moment out of that.

Ian Ziering: You know what I just teed it up, he’s the one who hit it out of the park.

Tara Reid: I mean I just think so many – I think really, the best kill of sharks is Ian’s. I mean he has the strength and he just – he really gets them good. I mean he’s awesome at it. And with the chainsaw, I mean it doesn’t get really any better.

Tara Reid: That’s true. I have a good kill in this time too.

Ian Ziering: The girls really step up. I mean Tara gets her own saw blade to wield and she takes out a shark really very valiantly. And then on top of the Bells Tower Vivica’s character pulls out a sword and slices one in half and it’s – you know, the women become very heroic. Give them the right tools and they – they’re bad asses.

Be sure to catch Sharknado 2: The Second One when it premieres on Syfy tonight at 9/8c.