The first Persona 4 Arena had an interesting objective to fill. As a unique crossover between Atlus and Arc System Works, this fighting game sequel to Shin Megami Tensei: Persona 4 (as well as some characters and plot elements from Persona 3) would attempt to be accessible to fighting game newcomers while delivering a plot for the next chapter in the series, as well as serve as a fighting game with a sense of depth to a degree which would allow the fans of ASW’s past endeavors to go into the more advanced tactics and play at a high level, much like Guilty Gear and BlazBlue before it. The game managed to do well enough that a sequel, Persona 4 Arena Ultimax, would come out to take the previous fighting game to the next level. Featuring new mechanics with both beginners and advanced players in mind, a multitude of new characters, a new story continuing off the heels of its predecessor, as well as several new modes, Persona 4 Arena Ultimax definitely has a wealth of content to keep players coming back to the ring.

Much like the previous game, most characters fight with four buttons, two of these control the characters themselves while the other two tend to control their Personas (There are a couple of exceptions to this. One of the two incarnations of Sho Minazuki has no Persona, so three of his buttons are for attacks while the fourth is a dodge button of sorts. Ken Amada can also control his dog partner, Koromaru, with the use of his third and fourth buttons.). All characters allow you to also repeatedly hit the A button to utilize a basic Autocombo, as well. While using these Personas in your combos is vital, or even just using some of those attacks on their own to help you get a good footing and go in on the opponent, there does come a bit of a risk to using them. If you keep throwing out Persona attacks unsafely, the opponent can attack the Persona, causing you to lose one of your Persona cards, which act like a Persona’s HP. If your Persona is hit enough to run out of cards (the amount of cards varies by character, usually determined by how reliant they are on using their Personas in combat), you’ll be stuck without them for a period of time until they reload. A character with more cards will have a longer reload time, so being Persona-broken as Elizabeth (she has a total of six cards as she heavily relies on Thanatos to fight with her) would be more disadvantageous than being Persona-broken as Akihiko (who only has two cards himself since Caesar isn’t going to be doing most of the work), due to the difference in the amount of cards they have and how much or little they rely on their Persona overall. Along with playstyle differences among the cast, the count of Persona cards is something to keep in mind when selecting a character. 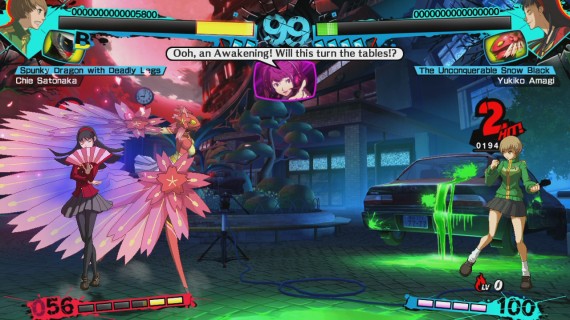 While the first game had the fighting game standard of being able to power up special attacks by paying some meter, Ultimax adds in the ability to power up super attacks in this method as well. By paying 75 meter instead of the usual 50, you can unleash a supercharged version of your super attacks, dealing out more damage or other effects. Another new mechanic this game introduces is the S Hold system. Mainly targeted at new players, this feature allows one to hold down the A button to charge a gauge up, and depending on how long they hold and how much meter they currently have, they can execute a skill just from releasing the held down button. Despite being a tool to help newcomers, it can have some uses for more advanced players potentially, as some moves seem to gain new properties from S Hold use instead of the normal input. One of Akihiko’s  special attacks actually becomes invincible to projectiles if you’re willing to take some time to charge the S Hold gauge, for example, which can lead to some safer ways to get in on his opponent if you can get away with the charge time. Quite possibly the biggest addition in this regard, however, is the new Shadow type added to most of the roster. Recommended for the more advanced players, these characters lose some attack power, bursts, the Awakening mode defense boost, and Instant Kills. To make up for these losses they have slightly higher health, can use Awakening-only supers at any time, and can activate the devastating Frenzy mode which allows you to cancel moves you normally couldn’t before, as well as temporarily pay a reduced cost for supers, which can lead to some devastating Frenzy-only combos. It’s important to weigh your skills, as well as the pros and cons of Shadow characters, when deciding what type to use.

The amount of single player functionality has increased in Ultimax, as well. In the original game, solo play was mainly limited to Arcade, Story, character challenges, training mode, and the brutal Score Attack mode which meant for only the most hardcore. This game offers a few additional options to the mix, such as making Score Attack more accessible. There are now multiple difficulties and courses of opponents in Score Attack, so while you can fight the superpowered opponents still, that’s only if you choose to play on Normal or higher (Normal has 5 normal fights and 5 boss characters, Hard and Risky are 10 boss character fights only). Safety and Easy difficulties are only against normal opponents, which makes the mode more welcoming to players of all skill levels this time around. An all new and very addicting mode, Golden Arena, has also been added for single player enjoyment. This mode allows you to take a character and fight against continuous opponents in succession while leveling up stats on your own character and learning skills such as being able to restore some of your health, inflict a status ailment on hit from normal attacks, or stealing your opponents meter, among others. You can also select a partner character to lend you additional skills in battle based on how much you fight with them. A large amount of my time playing was spent here, as I found the RPG elements of this mode to offer a fun twist on the formula. The in-game tutorial from the previous game also returns, and has been expanded upon to cover some of the new mechanics preciously talked about above. While it won’t be as valuable to newcomers for experience as time spent in training mode or in actual matches, it does serve as a good starting point to those new to the genre. 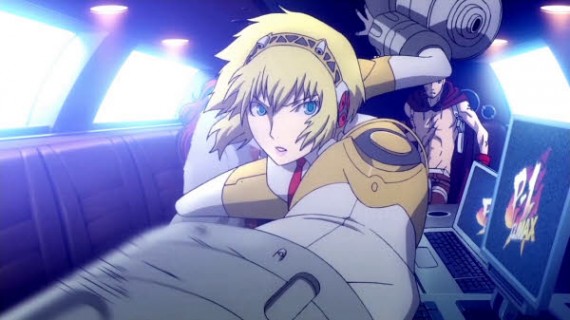 Story mode has also been reworked in this game, and from a gameplay standpoint it’s a change for the better. In the first game, each character had their own separate story mode campaign, and due to the nature of the plot you’d have scenes repeated quite a few times. The plot was pretty good and left an interesting cliffhanger for this game to work off of, but getting there felt tedious. Persona 4 Arena Ultimax changes that by giving two main campaigns for the characters to work together in versus one campaign for each fighter (there are some additional campaigns that are available through DLC, however. The character, Tohru Adachi, comes with his own shorter campaign, and players who missed on the first game’s plot can buy an add-on that let’s them play the older story in this game). Unfortunately it feels the potential from the past game’s cliffhanger is never fully lived up to. The plot isn’t bad, it’s just not great either. Quite a bit of it feels cliche at times, too. However, the character interactions, especially in Episode P3, definitely make up for this. The way the characters interact in their groups are definitely some highlights. While the general plot is the same between Episode P4 and Episode P3, there are some episode-specific instances, such as some of these character interactions and a few plot points that tend to be exclusive to one side or the other. It’s not bad by any means, but overall I felt it could have been better.

Even the online play got some extra substance to it as well. The last game allowed players to take part in ranked matches or host unranked rooms where up to 8 players can spectate fights and wait their turn to take to the ring, but by taking a couple of cues from another ASW fighting game home port, BlazBlue Chrono Phantasma, this game manages to step up from before. For starters, when hosting an unranked room, you can now choose to make it either a spectate room like before, or allow everyone in the lobby to pair up and fight against eachother with little downtime. Another BBCP carryover is the new Lobby mode. In this mode, players can pick an avatar to represent them in meeting places based on arcades, allowing you to interact and chat with other players before fighting them. A normal unranked room can only hold 8 players at maximum, but if you have a group of more than that and you all want to play, you could easily enter one of the empty lobbies and host your session there, which adds more utility to the mode. Whether you’re looking to meet and duke it out with new players, or you and your friends want to get a larger party going, the Lobby mode will definitely see some use from fighters. Unfortunately for Xbox 360 owners, the Lobby mode appears to be a PlayStation 3 exclusive feature based on details on the official Persona 4 Arena Ultimax website, so if you have both consoles it may be important to decide if you need this mode before buying. 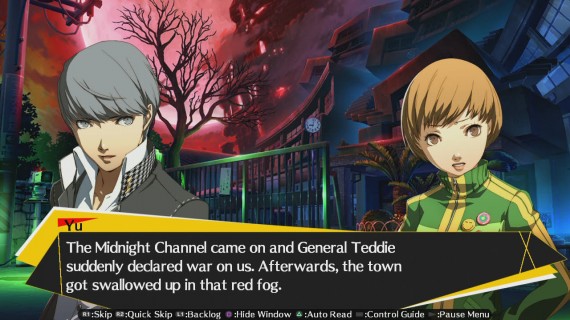 Persona 4 Arena Ultimax manages to be even better than the game that came before it with an overall rock-solid package. Aside from the story itself being middle-of-the-road, the way you play it across the two campaigns is a welcome change. The new mechanics added into the core gameplay shake things up enough to keep the already fun gameplay even more interesting. With even more new characters and the new Shadow types for most of the roster, there’s most likely a character that scratches a certain itch many players will be looking for in picking who to use. The online netcode feels good as before, while not perfect it definitely is one of the better ones powering a fighting game these days much like in the previous Arena and BlazBlue titles.The new modes and online functionality are a welcome addition, especially the Golden Arena and Lobby modes, which both can be very fun. Much like Junpei himself, this game has leveled up.