by Jasmine Alyce
in Entertainment 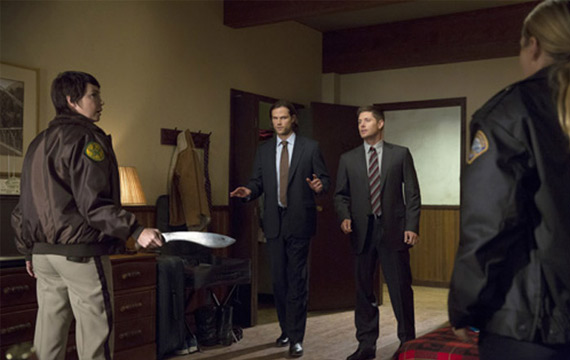 A new episode of Supernatural airs next week and we’ve got all the details you need to know, including which guest star is set to make a return appearance.

This week the Winchester brothers will see the return of Jody Mills, who’s popped up more than a few times throughout the series, starting with her introduction in season 5. This week, the supernatural will find her once again, while she’s on a sheriff’s retreat with a plucky new partner, and calls Sam and Dean for help.

Jody Mills (guest star Kim Rhodes) reluctantly attends a mandatory sheriff’s retreat and is partnered with an overeager sheriff named Donna (guest star Briana Buckmaster) who wants to bond. Just as Jody thinks things can’t get any worse, a body with just strings of meat and skin hanging off the bones is discovered. While the local sheriffs blame an animal attack, Jody knows better and calls Sam (Jared Padalecki) and Dean (Jensen Ackles). Tim Andrew directed this episode with teleplay by Jenny Klein and story by Jenny Klein & Phil Sgriccia.

Don’t miss a new episode of Supernatural on Tuesday December 2nd at 9/8c only on The CW!

Angelica Celaya Teases What's to Come for Zed on 'Constantine'

'The Walking Dead' Spinoff to Film in Pennsylvania