My experience with the Monster Hunter series in the past has been extremely limited. I had always been curious on the series but the only thing I had played of it prior was the demo to Monster Hunter Freedom Unite several years ago. When I was given the opportunity to play the demo to the newest instalment, Monster Hunter 4 Ultimate, I decided to give it a try and hope it would click more with me than the other demo did

Upon starting the demo you’re given prompts to pick your language, difficulty, and enabling/disabling use of the Circle Pad Pro attachment. The difficulty is kind of important here since this affects a few things in the demo. For starters, Beginner mode lets you dish out more damage to monsters and offers markers to help you locate your target. However if you plan to play with someone in co-op, make sure to coordinate what difficulty you’ll be playing on, since all players must be on the same difficulty to play together. Beginner only has two hunting missions, the Great Jaggi and the Tetsucabra. Experienced has both of those as well as an additional quest where you hunt an even stronger creature, the Gore Magala. After selecting your quest you proceed to the weapon selection screen. Most of my time playing the demo has been with the Switch Axe, a weapon that I’ve grown rather fond of during my hunts. You then choose whether or not to go in with optional tutorials and then start hunting. 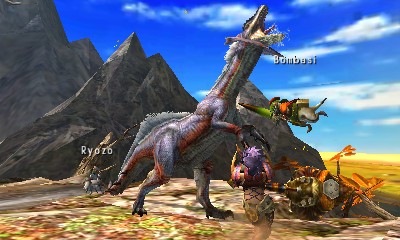 You start your quest in the camp, where you can equip yourself with a multitude of items before heading onward to complete your mission. Monster Hunter 4 Ultimate is a little slower than other action games, but this isn’t necessarily a bad thing. With 14 weapons selectable in the demo it’s very likely you’ll find something that fits your style of play, and combat feels great when you find the right weapon. You can kill other monsters along the way to the target, and even harvest materials from them, although you can’t do anything of note with these materials since this is only the demo. I found myself doing this process anyways a majority of the time just to get the habit down for the future. 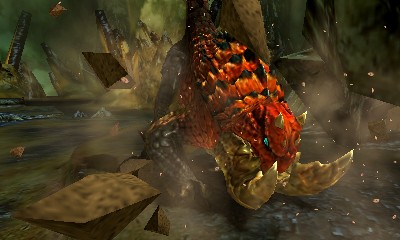 Eventually you’ll find your target through the help of the map on the bottom screen (and through the markers if you’re on Beginner mode), in which the real challenge begins. Having shortcuts for healing and weapon sharpening items on the touchscreen are definitely welcome tools to have. As you hit enemies enough over time your weapon will begin to get weaker, so finding the chance to sharpen it back to full strength once it starts to decrease is essential. Keeping an eye on your health and stamina are also important. Stamina is used by running, dodging, and even certain weapon attacks, so it’s important to make sure to use it wisely. It will recharge but it’s important to keep in mind sometimes you should be dodging as opposed to using a lot of stamina on some attacks. The Switch Axe has a technique that, while hitting over and over again, can deplete your stamina meter if you let it go for extended periods of time. It’s wise to consider when to focus your stamina meter on getting those big hits when the monster is down versus running and dodging when the monster is up and fighting. My fights in the demo, especially with the Tetsucabra and the Gore Magala, were both very tense. With the extremely small experience I had, both were challenging and definitely enjoyable. 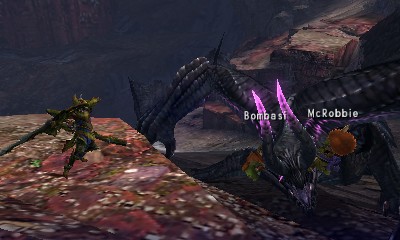 In addition to being able to hunt on your own, the Monster Hunter 4 Ultimate demo allows for both offline and online co-op, so you can hunt with your friends. If a big fight is really difficult for you when you play solo, team up with some friends and work towards defeating it easier, then you can share some of the loot you could harvest from it. Again, that won’t matter much in the demo, but it’s still a good habit to get used to for the future. The only real awkward thing going on in the demo is a problem with the actual 3DS system itself: there’s no second analog stick built in. Camera control is left to the touchscreen or the Dpad. This is a problem that is rectified through the use of a Circle Pad Pro attachment or by playing on a New Nintendo 3DS, but since I have only a 3DS XL these aren’t options at my disposal. It does take some getting used to for sure. A quick tap of the L button can always snap the camera behind you at least.

Overall I’ve had a fun time with the Monster Hunter 4 Ultimate demo over the time span that I’ve been playing it. Picking up the Switch Axe and killing some monsters has quickly grown into an enjoyable time-waster for my 3DS, and in my opinion this demo does a good job on offering a taste for players on the fence.