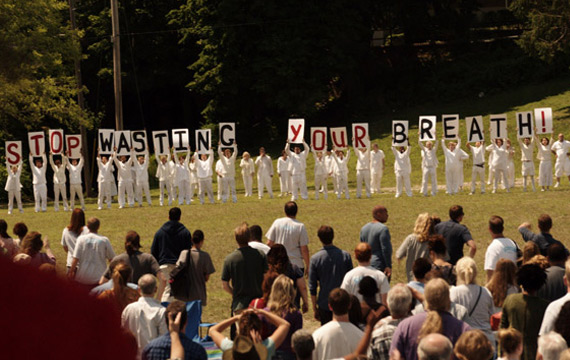 They say to save the best for last and ATX Festival certainly did. The final panel of this year’s festival focused on the hit HBO show The Leftovers and came complete with some surprise guests for fans.

The Leftovers’ creator Damon Lindelof and executive producer Mimi Leder were originally announced as panelists, so fans (including myself) were delighted to see three extra nametags placed on the stage when they entered the SFA Ballroom. Christopher Eccleston (Rev. Matt Jamison), Carrie Coon (Nora Durst) and Ann Dowd (Patti Levin) joined the panel after a short session with Damon and Mimi, and talked to fans about their characters, their acting methods and more.

Our biggest takeaways from the panel are below!

If you haven’t already, make sure to check out our Boy Meets Girl Meets World panel recap and our Empire panel recap.

Stay tuned for more ATX festival coverage, including our Gilmore Girls reunion panel recap and a roundup of our entire weekend!

MTV's 'Scream' Has One Killer Cast (and the New Promo Isn't Bad Either!)