If you were a big of a fan of Goosebumps as just about every other kid that grew up in the 90s, you’ll be pretty stoked about this newly released trailer.

The film stars Jack Black as R.L. Stine and as you’ll see in the trailer, all hell breaks loose when some nosey teens break into his house and unleash all the monsters we had nightmares about as kids. That includes Slappy, the dummy version of Chucky from Night of the Living Dummy, The Executioner who has no problems killing kids from A Night in Terror Tower, the world’s most terrifying Scarecrow from The Scarecrow Walks at Midnight and those damn lawn gnomes from Revenge of the Lawn Gnomes, to name a few.

You can watch the trailer, view the full poster and read a synopsis of the movie, per Columbia Pictures, below:

Upset about moving from a big city to a small town, teenager Zach Cooper (Dylan Minnette) finds a silver lining when he meets the beautiful girl, Hannah (Odeya Rush), living right next door. But every silver lining has a cloud, and Zach’s comes when he learns that Hannah has a mysterious dad who is revealed to be R. L. Stine (Jack Black), the author of the bestselling Goosebumps series. It turns out that there is a reason why Stine is so strange… he is a prisoner of his own imagination – the monsters that his books made famous are real, and Stine protects his readers by keeping them locked up in their books. When Zach unintentionally unleashes the monsters from their manuscripts and they begin to terrorize the town, it’s suddenly up to Stine, Zach, and Hannah to get all of them back in the books where they belong. 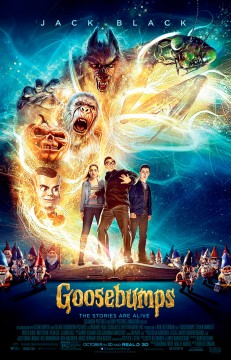