They Did That! ‘The Wiz Live!’ Stars Shanice Williams and Stephanie Mills Belt Out ‘Home’ 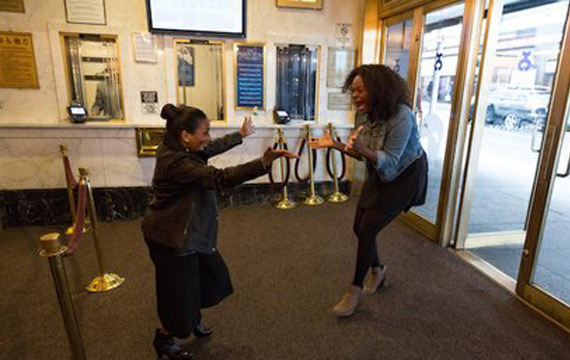 The Wiz Live star Shanice Williams has a bit of pressure on her since Stephanie Mills, who plays her Auntie Em in the broadcast is the musical’s original Dorothy, but it seems like the vet has taken the newcomer under her wing.

As far as advice that Mills has had to offer Williams, “One of the best pieces of advice she’s given me is always stay humble and live in the moment, because I’m not ever going to get this opportunity again,” the new Dorothy told Entertainment Weekly. “This is once in a lifetime, so live in the moment. And also, when I sing “Home,” she always reminds me, “You’re the only one on stage, and this is your moment — don’t hold back.” And if the clip below is any indication, Williams certainly took that advice to heart.

Watch the two talented women belt out “Home” in the video below, that was exclusively shared with EW, Essence, and People:

The Wiz Live! stars: newcomer Shanice Williams as Dorothy, Elijah Kelley as the Scarecrow, Ne-Yo as the Tinman and David Alan Grier as the Cowardly Lion.Queen Latifah as The Wiz, Mary J. Blige as Evillene, the Wicked Witch of the West; Uzo Aduba as Glinda, the Good Witch of the South; Amber Riley as Addaperle, the Good Witch of the North; Common as the Gatekeeper, and the original production’s Dorothy, Stephanie Mills, as Auntie Em.

To read the full interviews with Stephanie and Shanice, head on over to EW, Essence or People.

Ease on down the road when The Wiz Live! airs Thursday, December 3 at 8/7c on NBC.