Deadpool isn’t allowed to flaunt his assets in a new international poster for the upcoming Marvel film.

The Merc with Mouth (Ryan Reynolds) is pictured looking coy and deadly rocking a pink and black backpack and some weapons, with his backside facing the audience, alongside captions that read, “Bad ass. Smart ass. Great ass.”

With all the fun promotion that’s been released for the film, it’s shaping up to look like one of Marvel’s most fun rides yet (we’re all about the snark and bad-assery combo) and we can’t wait to check it out.

Take a look at the ass-tounding poster below: 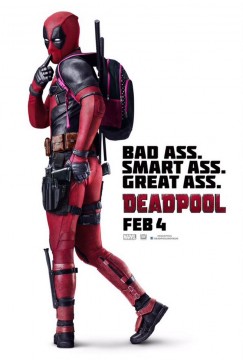 Based upon Marvel Comics’ most unconventional anti-hero, DEADPOOL tells the origin story of former Special Forces operative turned mercenary Wade Wilson, who after being subjected to a rogue experiment that leaves him with accelerated healing powers, adopts the alter ego Deadpool. Armed with his new abilities and a dark, twisted sense of humor, Deadpool hunts down the man who nearly destroyed his life.

Are you excited to see Reynolds bring the Merc with Mouth to life? (We know we are!)