Being a gamer for pretty much my entire life I obviously knew the name Lara Croft. Sadly, I only knew her by name as I never played any of the past Tomb Raider titles before the 2013 reboot of Tomb Raider. Well, that’s not entirely true, I did play about 20 minutes of Tomb Raider: The Last Revelation on Dreamcast. Obviously, by the amount of time spent, I didn’t really get into it.

But once 2013 came around my adventurous spirit was being called to by the new Tomb Raider. The gameplay, action, and adventure all spoke to me unlike any previous game in the series. I had to play this version, and thankfully I did because every little bit of it was so wonderful to experience. My adventurous spirit was extremely satisfied by what the game offered.

Now, Lara Croft is celebrating 20 years of being an icon in the gaming industry. I haven’t been a fan for those 20 years, but with how much I love Tomb Raider and Rise of the Tomb Raider, I’m certainly happy to at least have my 3 years of great adventures with her.

I actually now consider Rise of the Tomb Raider to be one of my all-time favorite games. If you were to ask me what my favorite game is from recent history, my automatic response is Rise of the Tomb Raider. The adventure once again is fantastic; the world is incredible to view – it’s easily one of the best looking games available. I took so many screenshots of the PC version of the game because every little detail in the world was absolutely gorgeous. 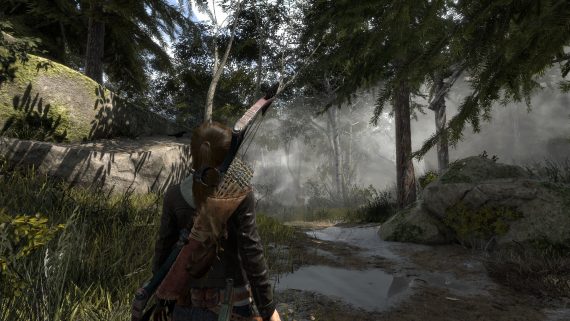 Even though I’m only just a recent fan of the series, I’m now excited about anything and everything that’s related to Tomb Raider. That excitement led me to purchasing the Rise of the Tomb Raider Collector’s Edition so I could have all the collectibles and the Lara Croft statue – which is totally awesome, by the way.

Now we have the new Rise of the Tomb Raider: 20 Year Celebration edition about to release on PlayStation 4 that comes with a limited edition art book and packaging. That’s automatically a must-get for me. I’m also very excited to play the new Blood Ties story chapter and being able to take a look around Croft manor. One reason to get the PS4 version when already owning the PC version is to be able to check out Blood Ties with PlayStation VR support.

Rise of the Tomb Raider: 20 Year Celebration also includes Lara’s Nightmare, a zombie combat mode that might be interesting. I’m not the biggest zombie fan, but since I’m a Lara fan I’ll have to give it a try. I’m also anxious to attempt Extreme Survivor difficulty when playing the game. That sounds like a great challenge that I would love to attempt. Plus, co-op for Endurance mode? Heck yeah!

I can’t wait to experience more on October 11th when Rise of the Tomb Raider: 20 Year Celebration releases on PlayStation 4. Xbox One and PC Season Pass holders will also have access to all the new content that’s releasing. I’m anxious to celebrate excellence with the new content for Rise of the Tomb Raider. May the great adventures always continue!

Rise of the Tomb Raider: Anxious to Celebrate Excellence