I recently got my hands on The Art of ReCore from Dark Horse and got to further explore the world of Far Eden and main character Joule. ReCore is one of those hit or miss games that some will love while others will not. For me I became addicted by its enjoyable gameplay and platforming, along with its unique battle system that I enjoyed all the way to the end of the game. 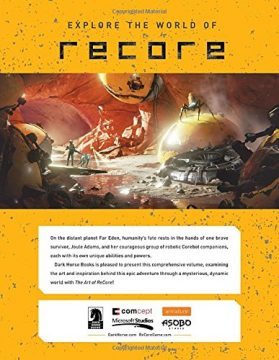 The Art of ReCore is more of a recap of what’s going on in the game by telling the story again through the art pieces for each character and corebot. Readers will find chapters on characters, technology, environments, and storyboard. Most pages include a sentence or paragraph giving insight into what’s been seen on each page, which provides a little more insight into some of the story behind the game.

The Art of ReCore is nice for the utmost fans of the game, but that’s it. I’m someone who loved the game, but only because of its gameplay and not because of the art. It’s a rather bland and uninspired world, and if you feel the same way, you won’t get much out of the book.

I did like seeing some of the concept designs for Joule though, especially the anime style that’s shared in the book. It actually made me wonder what the entire game would look like if it took on the anime style with everything, including the dusty and rocky lands. It might have made it slightly more intriguing and less of a barren land that doesn’t feel inspired.

The Art of ReCore also mentions how the anime-inspired art style for Joule in the early stages of development was reminiscent of the old Mega Man titles.

As I progressed through the book and reached the environmental section, I found some of the concepts to be interesting for a few of the caves and the Far Eden Tower. I was actually hoping to see a lot more environmental concept and inspirational art in the book, but there just wasn’t much of it at all. However, there is one image that’s very interesting that shows Joule and Kai standing on top of Eden Tower as the terraforming of the planet comes back to life with lots of green appearing. I want more of that!

The Art of ReCore isn’t a must own art book unless you’re an absolute fan of the game that must collect everything. It’ll provide some more information and detail into the characters and world that the players are exploring, but just don’t expect a whole lot from it. There are things I like about the book as I mentioned, but much like the game, it’s fun to play (read) even though it isn’t the greatest.