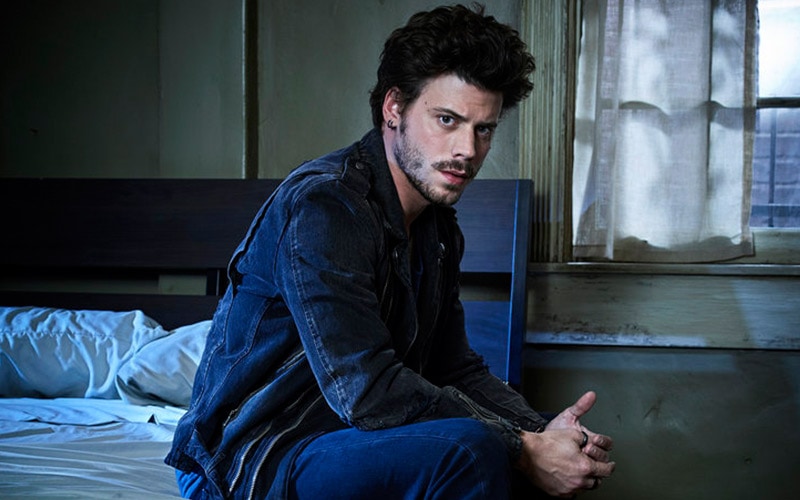 Midnight, Texas, NBC’s newest series, premieres tonight at 10/9c! We were actually able to visit the set of the series earlier this year in Albuquerque, New Mexico. While on set, I sat down with François Arnaud, who plays Manfred Bernardo on the new series, to talk about his character, what drew him to the series, and what he can tease for the first season!

So we know you’re in the last week of filming for season one, coming into that and seeing the evolution of your character across the season – Has there been anything that’s really surprised you, that you can talk about?

François Arnaud: The plot lines have been very surprising from the start weekly. But I think what’s surprising actually is the level of comfort that I found in portraying a character, where I feel like the writers really … I feel it clicks from the start with Neils, who directed the pilot.

The tone that we wanted for Manfred to employ, sort of cynical aspects of his personalities, the dark humor, and I feel like, as time went on, the writers really … We just saw eye to eye and I would see in the writing, how maybe previous performances had influenced their writing style. That’s just a lovely thing to happen.

Was it something before you even started filming the pilot, just from reading it? Or was there like a certain scene in which it just clicked and you’re like I know him.

François Arnaud: It was all very quick, the casting process, because I was doing “Blindspot” at the time, and Martin Gero, creator of “Blindspot” flew into New York, where I live from LA. And after shooting day just took me aside, and he’s like, “I’m so sorry man, we’re gonna kill you off for the finale.” And I was like, “oh, okay.” But he was like, “we always knew, but it was one of three options, and that’s you know, we need to raise the stakes. It’s like people in the age of “Game of Thrones”, you know, people and characters we care about need to …

François Arnaud: Need to go. But he was very gracious about it and he said, “Listen, if you find something else, we’re gonna work around it.” And so the next day I got this … and I think two days later I auditioned for it, and they’d been looking. I think the four other main cast members were cast, they just didn’t have their lead. And they’d been announced in the press and all, and they flew me to LA to meet with the director, and do a screen test. So it took about three days to get cast in this, and then you know, and the “Blindspot” people had to deal with me being in New Mexico for a month so that wasn’t easy. But they promised.

… hold off killing you off.

François Arnaud: Oh no, they still killed me. It was a pretty brutal death, I got impaled and burned.

But yeah… way to go out.

François Arnaud: There were a lot of scenes for the audition, and we sort of explored different avenues, where it would be more or less comedic. But I think, ultimately, there’s something that’s very … I’m allowed to be in this character as opposed to my character in “Blindspot”, or my character in “The Borgias”, or the films that I’ve made, where I’ve often played characters that were very much in control, and professionals, and very skilled, and I think Manfred is very sensitive, and emotional and I’m just very in control of his emotions.

And, that’s something goofy, it allows me to be like a bit of a doofus, and like cool but sort of not so clean cut you know? Even what they’re doing with my hair right now, which is letting it be what it wants to be is a first for me. Usually everyone is trying to tame the beast, like in every show or every movie, it’s always the main conversation is like what are we gonna do with the hair? And so they usually give me a parting and it’s tons of time and producers disagreeing over it and here they would just after the pilot in which there was a lot of conversations about my hair, after the pilot they were like “let it be where it wants to be, more crazy, more f**ked up.” So I think that’s just a testament to like how they trust me with the character and how … it just felt right so yeah.

François Arnaud: Yeah she is my grandmother. Yeah.

I thought, I think that might be the first time I’ve seen Francois smile on screen.

François Arnaud: No, no, no. I’ll send you other work. No, I’ve done a lot of smiley roles recently actually. I have a very smiley role coming up, a lovely film that I did with Rebecca Hall and Dan Stevens in New York this year, Jason Sudeikis is also in it. It’s called Permission, it’s gonna come out soon. And I’m very smiley in that, I’m just really sunny, and glowy, and innocent, and naïve, an idiot, and stupid. But yeah, I did smile in that scene.

Well, Cesare didn’t smile much though.

François Arnaud: Cesare didn’t smile much, no, no. I mean he had to rule over Europe and kill people. I do kill people in this too, I mean, I kill people, people. No, I’m just …

How does a ghost taste?

François Arnaud: How does a ghost taste- …

It seems like you get to swallow of ghosts.

François Arnaud: Yes right, it’s … yeah. I actually, I like how far they went with it, and in subsequent episodes it’s even more brutal. It has a very rape-y vibe to it, it takes a toll on Manfred’s body for days, and weeks. It’s something that costs him and it’s not just a trick. It’s definitely a fun show and there’s fun, but I really see it as a responsibility, especially as the lead character of this ensemble, to ground his experiences and tap into real fear and real self doubt. I just think it gives the appropriate weight to the experience.

Well that’s really kind of why he’s really interesting, because he doesn’t let that kind of thing happen, he wants to control that.

François Arnaud: Exactly, but yeah, and I don’t know what your take is, on why he decides to stay, but as opposed to run away. But he does run away a couple times in this series, he’s like, “I’m done.” But then, I think, ultimately, realizes that this sense of community that he finds in Midnight is a positive thing in his life, and that he’s been fending for his own for a little too long. That kind of comes of feeling too long and that it brings him something, and obviously there’s the love story with the brilliant Sarah Ramos, who is really incredibly smart, and a great … I think she brings a really great spark to that character that could just seriously be Strawberry Shortcake sweet, you know. She has a real wit.

François Arnaud: Yeah. You see it. Actually, oh you’re right, it’s early 1900s it’s not the 1800s. Yes, I’m sorry. Yes we see two younger incarnations of Xylda throughout the season. One is very young and one is when Manfred was a child. So, in the episode nine there’s this … I’m probably not allowed to say any of it, but what the hell. Episode nine, there’s scenes that I sadly didn’t get to play, because I couldn’t play a five year old version of myself, as hard as I try. But they’re really moving scenes, where you see a young Manfred tying to cope with the first beginnings of his power and the effect it has on other people.

Do you know if your powers are fully inherited from your parents?

François Arnaud: They were. So Manfred comes from a long line of self-identified Gypsies. They say Gypsies, so I guess it’s not politically correct to say that anymore about other people, but they can call themselves Gypsies. So Roma or whatev- but Eastern European descendants, and it’s I think traditionally in fiction, I guess, psychic powers are passed on to blood, but they often skip a generation, so he definitely got it from his grandmother. But to a different extent, I think her powers were very limited actually, and his powers go beyond anything that he imagined. And he didn’t necessarily have access to them before, and faced with saving the world as one is, he has no choice but to find a way to … I mean or it just comes to him more naturally, I guess now.

So does he know all his power when we first meet him?

François Arnaud: No, he doesn’t, I mean he knows that he’s a psychic, but I think that’s part of the backstory of Xylda and Manfred, is that it didn’t always work. I mean they would do readings for people and if it didn’t happen, they would just pretended. They ran a lot of scams, they pissed off a lot of people, and those people are after Manfred. He owes a lot of money to a lot of different people living and dead. And that’s what sort of drives him to Midnight. What was the questions?

But you know that’s what happen in Midnight, because as the veil is fraying, the first effect that, that has is it sort of enhances everyone’s inner demons, right? People have a hard time controlling and managing their abilities, and so that’s what’s also interesting, because the threats to Midnight and the main characters are often themselves, as opposed to just having a monster coming from the outside.

So did Manfred start the fraying?You had talked a little bit about how far they pushed it. Shows are always trying to find their tone in season one. Were you surprised with where the series went? Was there any point, you know, in terms of conversations, where you even were trying to navigate what the show is? Finding your voice with the character?

François Arnaud: I was always on board with keeping some of the humor, and the dialogue, and the characters, but I am very happy with the way we steered away after the pilot, from the more whimsical aspect of the show. It reminds of something that we did last year, but that isn’t what we’re doing, it’s just like visually it’s much darker. The director of photography, whose on board with us, Mike Spragg, has only done very gritty cable television, in England mostly, and is able to create really amazing atmospheres really quickly, very efficiently. But it’s much darker, it has less of a Harry Potter sort of family vibe to it. The humor’s still there, but I think it’s scarier. And it’s not a … I hope that it’s not afraid to allow itself to go to those places of where … I mean it’s never gory not really gory, but it’s definitely more atmospheric and it isn’t afraid of tension. I’m pleasantly surprised with that.

Arielle Kebbel Geeks Out Over Her New Series 'Midnight, Texas'

Captain Marvel Will Be Set in Early 90's