The inaugural event will blend food, music, and other production elements for an unforgettable evening. The 2018 edition of Cinebash will pay tribute to Saul Bass, a Jewish-American graphic designer and Academy Award-winning filmmaker, best known for his motion picture title sequences, including Alfred Hitchcock’s Vertigo and Psycho, promotional posters for such films as Exodus, The Shining and West Side Story, as well as corporate logos.

Cinebash party guests will step into the world of Saul Bass via a collection of art installations that make dynamic use of light, color, and movement, conceived and produced under the creative direction of Danny Davis of Protect Awesome, known for his ambitious and wildly imaginative work with such clients as The Goat Farm, Terminus and Atlanta Contemporary. Other party highlights include an assortment of delicious bites from favorite restaurants presented by Taste of Atlanta, signature themed drinks, fun photo ops, a commemorative poster, plus a custom swag bag filled with branded giveaways. 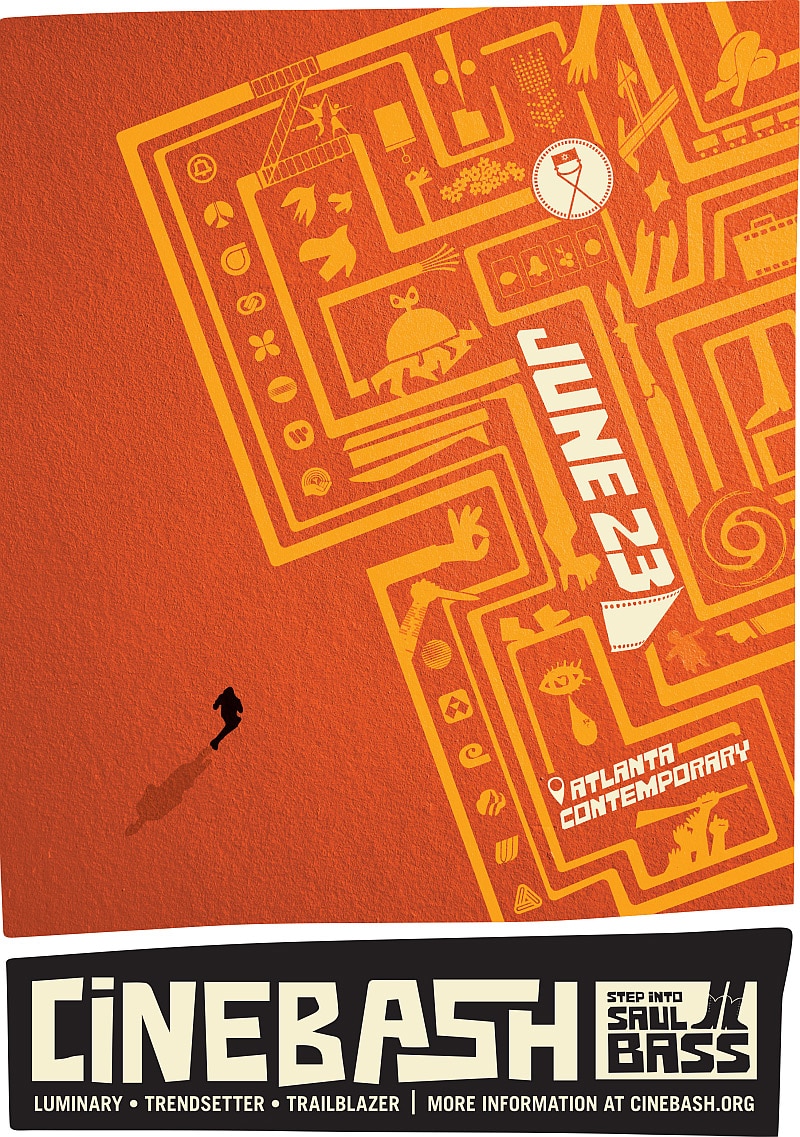 We had the chance to speak with Danny Davis as well as AJFF’s Film Programming Manager, Shellie Schmals, about the upcoming event. See what they had to say below!

This is such a cool idea for an event – it reminds me vaguely of Sound and Vision which Atlanta Film Festival use to do. Was that at all an inspiration for this? Where did the idea of doing an event like this originate from?

Shellie Schmals: The Atlanta Jewish Film Festival became an independent non-profit in 2014, and was looking to identify tent pole programs. As the development of these programs unfolded, our organization knew that each had to be a standalone entity. Each new program outside of the annual film festival had to bring something new to both the AJFF skillset and our audiences. Cinebash is a film party, bringing a new arts and cultural event to showcase an aspect of cinema and is program unlike anything else in Atlanta.

When AJFF first approached you to be a part of this, where did you start with coming up with the vision for this? Did they give you any guidelines to stay inside of, or did you have complete creative freedom?

Danny Davis: I had a pretty wide path. As with everything we have a hand in we start with an eye to creating space that feels complete departure from the day to day. We build experiences we’d want to enjoy.

How long have you been working on putting everything together?

Danny Davis: It’s been a collaborative process for several months.

Shellie Schmals: With an event like this it’s a relay, not a sprint. 2016 was when planning got underway but after securing the rights for this year’s theme (Saul Bass), things moved rather quickly as the Atlanta Contemporary, Taste of Atlanta, and master planner Danny Davis of Protect Awesome came on board. We also have over 20 community partners working to promote and provide input with the event to date.

Can you talk a bit about the installations that attendees will experience? How will Bass’ work translate into this immersive experience.

Danny Davis: Expect to be surprised. The evening is not what it appears to be on the surface at first. open areas to enjoy new and old friends under a spectrum of surreal light and color, nooks and and quiet corners to explore and engage new ideas, music that has been carefully selected to make you want to explore the evening to its fullest yet feel nostalgic and timeless. Food pop ups, immersive moments, beautiful curated art and an opportunity to experience a connection to an iconic visionary who changed the way we encounter our world.

Graphic design’s role in film is something that can frequently get overlooked or overshadowed – yet its a form of art all on its own. Was it a choice to specifically pay tribute to someone from this space who has a huge involvement with film branding such as Saul Bass? Or how was it decided to honor him with this first event?

Shellie Schmals: For our first Cinebash event, we wanted to find a theme rich in content; and, of course, one that provided a tangible impact on world of cinema. When thinking through ideas for this year, honoring Saul Bass was an easy concept to think on as he, Saul Bass, Jewish-American graphic designer, was a game changer in almost every sector he touched. To narrow the scope of what we concentrated on specifically in his work has been the greatest challenge, as there are almost limitless options. For future Cinebash events, we anticipate a completely new theme with a completely different take but knew that in launching this new AJFF program, we couldn’t have asked for a better subject matter to start.

Were you familiar with Saul Bass’ work prior to this project? What have you enjoyed the most about exploring his work and bringing it to life with this event?

Danny Davis: His work allows freedom yet provides a specific style. It’s luminary and forward looking yet harkening back to a simpler time.

Partnering with Taste of Atlanta seems like a natural fit for this. How did that relationship evolve into them being a part of Cinebash?

Shellie Schmals: AJFF is always looking to onboard new partnerships and new opportunities. In 2017, Leah Sitkoff, AJFF’s Communications Manager, and myself, struck up a friendly conversation with Skye Estroff, TOA’s Marketing and Media Manager on how both of our organizations were looking to branch out into new audiences by providing different experiences. Knowing that TOA has a passionate and dedicated following of Atlanta foodies – our conversation quickly developed into how fun it would be to curate a selection of bites within a presented artistic theme. Once this year’s theme for Cinebash became tangible, we reached back out to Skye and Dale DeSena, Founder and CEO of Taste of Atlanta, who came on board officially and we’re thrilled about it.

What was your biggest challenge with bringing everything together for this. Were you able to accomplish everything that you wanted to with the installations?

Danny Davis: Sometimes you never really finish a project. I’m excited with where this one is headed though.

What would you recommend as the dress code for Cinebash?

Shellie Schmals: It’s a party! Dress code is casual, fun, and whatever brings out the Saul Bass fan in you! Personally, I swoon for the Saul Bass style of the 50s and 60s! I look at the A-line dresses of West Side Story, or the re-fined dapper looks of Ocean’s 11. Might be a little too hot to pull that off in the summer but I would love to see Cinebash guests go all out, a look at Saul Bass’s IMDB page for inspiration. But as long as you have a passion for Saul Bass, parties, and/or tasty treats, you are welcome!

If you had to describe this event in 3 words. What would they be?

What do you hope that guests will take away from this immersive experience?

Danny Davis: Hopefully, guests will want to engage and collaborate with potential new connections and create memories that will have them looking forward with an eye full of curiosity for their graphically driven world.

Shellie Schmals: We hope attendees will leave with a greater appreciation of a designer whose style they already know, whether they realize it or not. From Bass’ work with film titans like Hitchcock to homages that reflect on his work like Mad Men or Catch Me If You Can, the impact of Bass’ work cannot be overstated. And, of course, we hope this experience will help to define AJFF’s year-round efforts in a new and exciting way. Oh, and of course, a really fantastic night with friends!

What is the one thing that you would like to tell every guest of Cinebash as they explore this experience you’ve created?

Will there be more events like this throughout the year in between festivals?

Shellie Schmals: AJFF has lots of events coming up! Cinebash is its own thing and each event outside of the festival will have its own branding and style. Our hope is that with all that we have to offer that there’s something for everyone!

We’ll be there – and we hope to see you there too!!