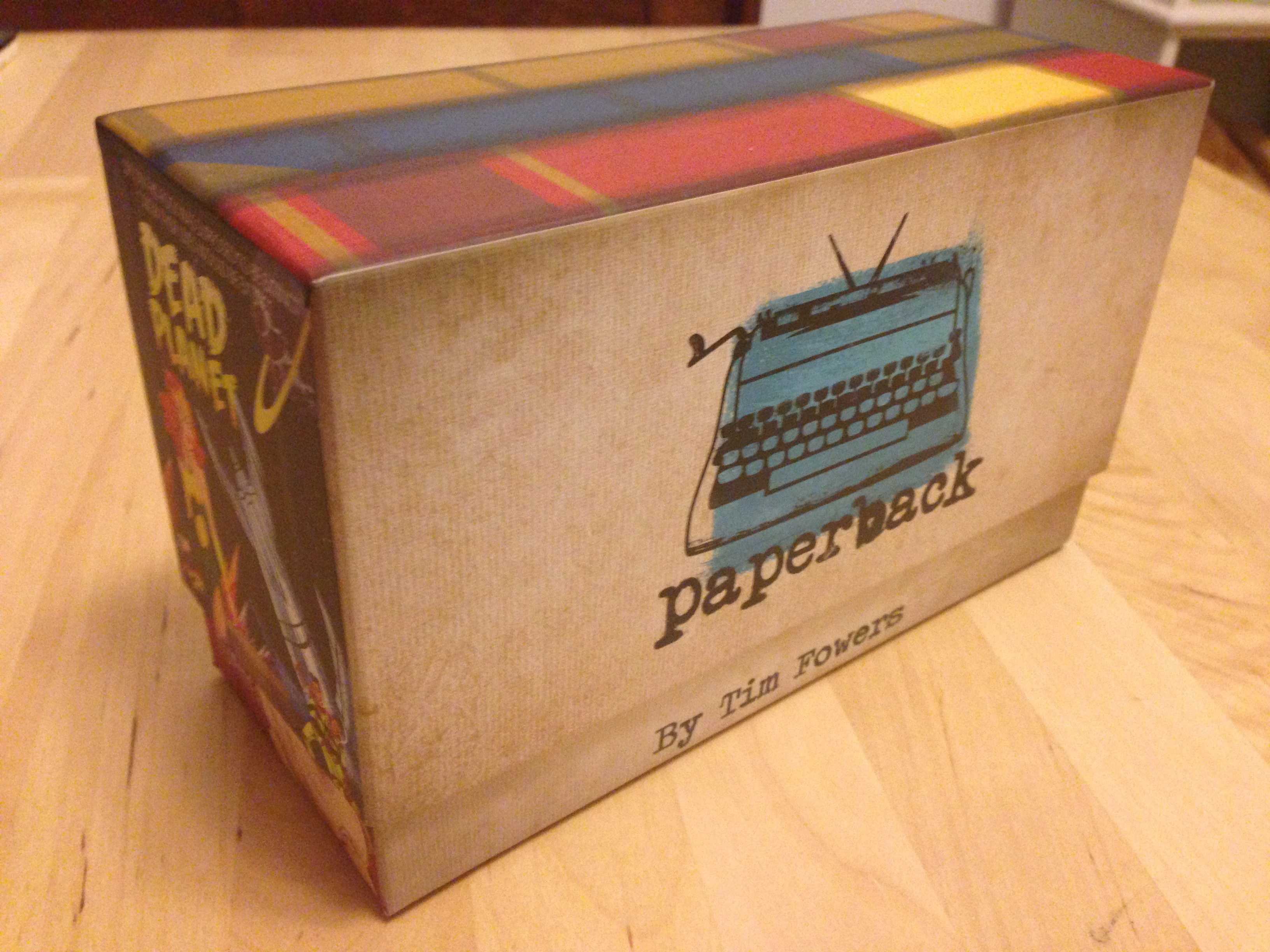 Paperback is a game I didn’t know I absolutely needed to own until I found out (quite by accident) that it existed. Once I found out about it I was all over it, though. I mean it’s a card game about amateur authors looking to become famous novelists. The concept alone was enough to get me fumbling for my wallet. Fortunately, the game itself more than lives up to the theme.

At its core, Paperback is a deck-building game. And as such, it’s loaded with all manner of cards. Cards for letters, cards for novels, cards for end-of-game achievements, cards for individual player abilities, cards, cards, and cards. There’s also a nice little set of wooden cubes to act as counters, but really it’s all about the cards. The reason I haven’t shut up about them yet is because they all look and feel great. And the reason I feel that’s worth noting is because the game is entirely self-published. Now I’m not entirely sure what resources Mr. Fowers has at his disposal, but every single component (from the box to the cards to the cubes and beyond) is incredibly well-made. I dunno, I just find that extremely impressive. What’s also impressive is that a decent portion of the included components aren’t even necessary for the base game. Achievements, author powers, themes, and cubes are all totally optional and have their own rules players can choose to incorporate (or not). 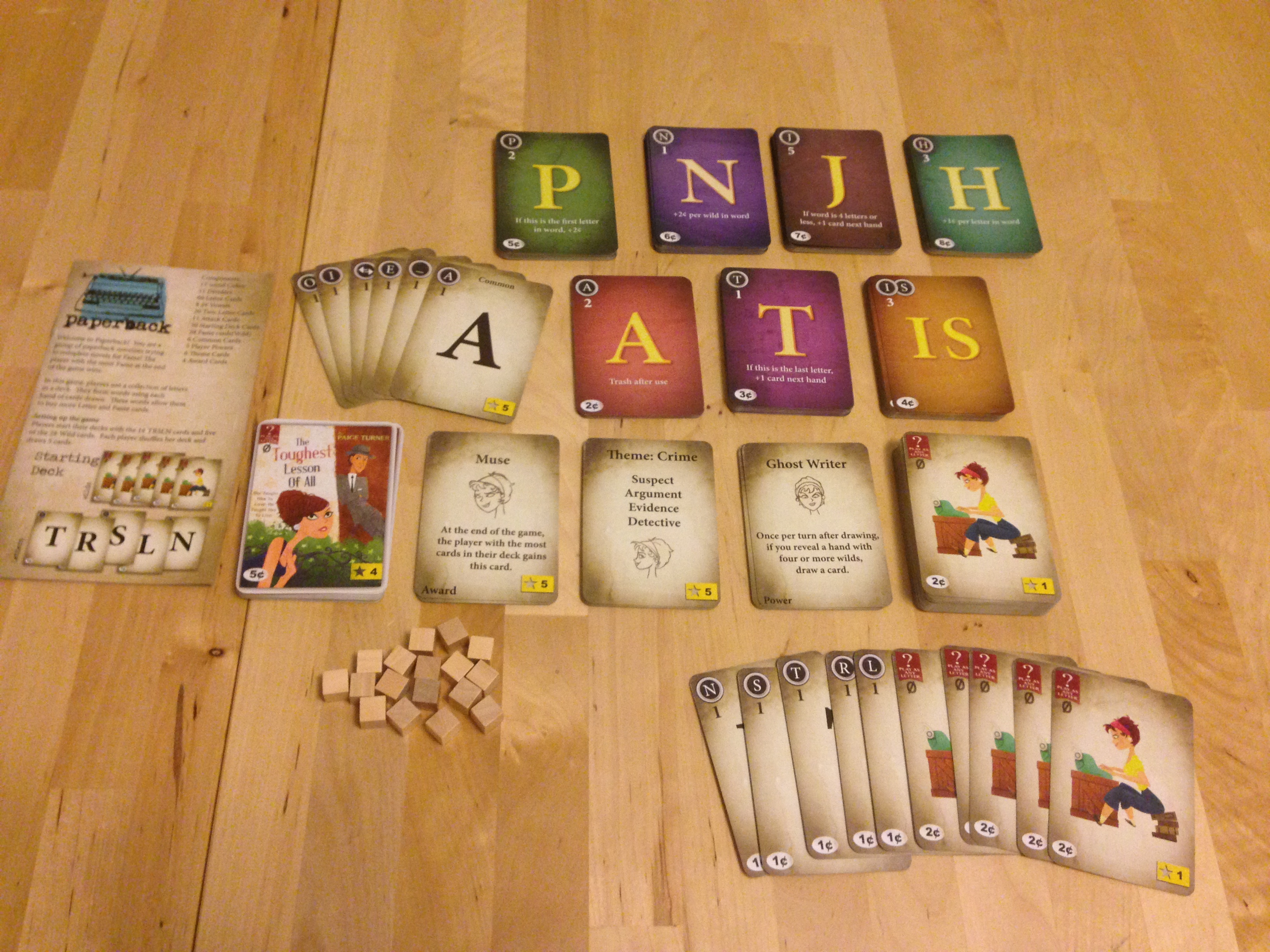 Deck-building is the driving force behind your actions in Paperback. Each turn players use the letters in their hand to spell words, then use the points accumulated from the word to buy more cards from the offer piles. There’s also no limit on how many cards can be purchased on each turn, so long as you have enough points to pay for it all. This is where strategy will be the most important. Do you grab an expensive card because it’ll be worth a lot of points when used in a word, and thus allow you to buy even more in the future? Should you be more mindful of the card’s ability (if it has one)? Or maybe you should avoid buying letters entirely and grab one of the wild novel cards, which don’t help you buy more cards but will be put towards your score at the end of the game?

The abilities present on each card are also a big part of the strategy – so long as you can manage to actually use them in your words. Some will drastically increase the value of a word, others will allow you to draw more cards on your next turn, and still others will affect the other players in various ways. This is all on top of the initial value of each letter as it’s used to spell a word, of course. 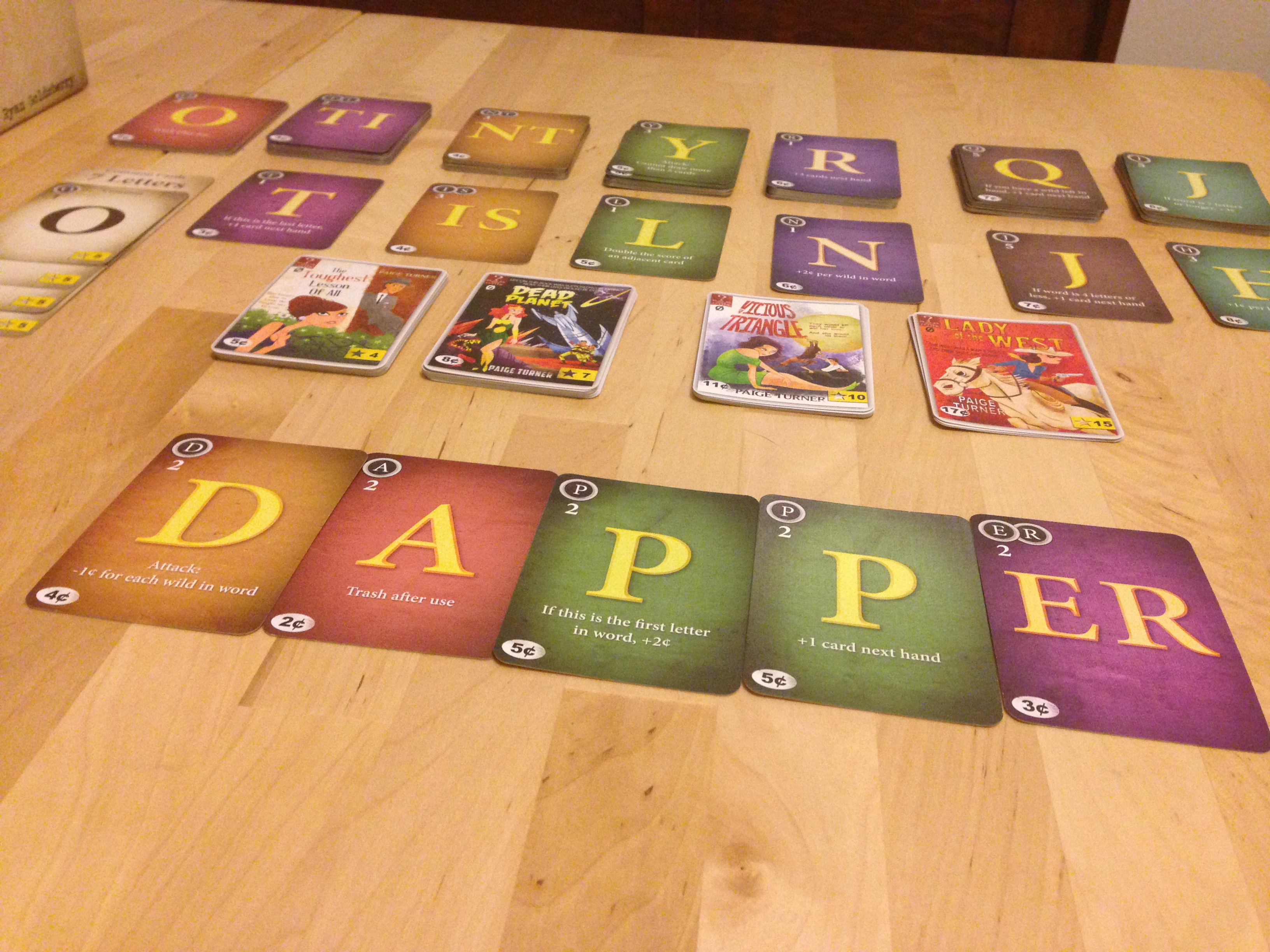 Then there are the extra cards and rules; such as themes that bestow players with bonus points at the end of the game if they can manage to spell specific words, special abilities exclusive to each player that are dealt out at random at the beginning of the game, and so on. If nothing else, Paperback gives you plenty of options. Although oddly there doesn’t seem to be a good way to trash (i.e. remove from your deck) cards. The red vowel cards must be trashed after use, which is fine, but I couldn’t find anything in the rules about trashing other cards. Normally I wouldn’t consider this much of an issue but being able to remove cards from your deck in a deck-building game can be pretty important – especially when certain cards actually have special abilities that are dependent on trashing cards in the first place.

The lack of trash options is really a minor quibble for a game like Paperback. The base game is tons of fun and has even managed to win over a few of my friends who aren’t actually fans of deck-building, but that’s only the beginning. There are a bunch of other optional rules and cards that can be thrown in for a little variety and added complexity. Plus the theme is just fantastic. Honestly if you like deck-building games even a little, or if you enjoy games that involve spelling words in any capacity, then you need to check out Paperback.