If you are a fan of movies or even just peripherally aware of pop culture from the past 40 years you will undoubtedly know that iconic scene from the 80’s John Cusack classic “Say Anything” A where he is holding the boom box above his head outside the window of his true love. At that moment, he is blaring Peter Gabriel’s “In Your Eyes” and it’s a moment that has been copied and parodied ever since. I have some great news; Mondo is releasing a 2-disc expanded soundtrack to the film that includes not only the famous Peter Gabriel song but a slew of other great hits of the era. If you’re a fan of vinyl and pop culture this will be a big hit for you. 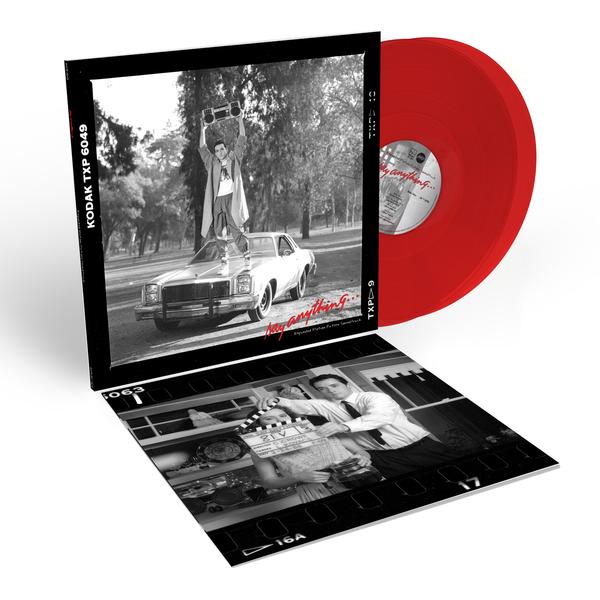 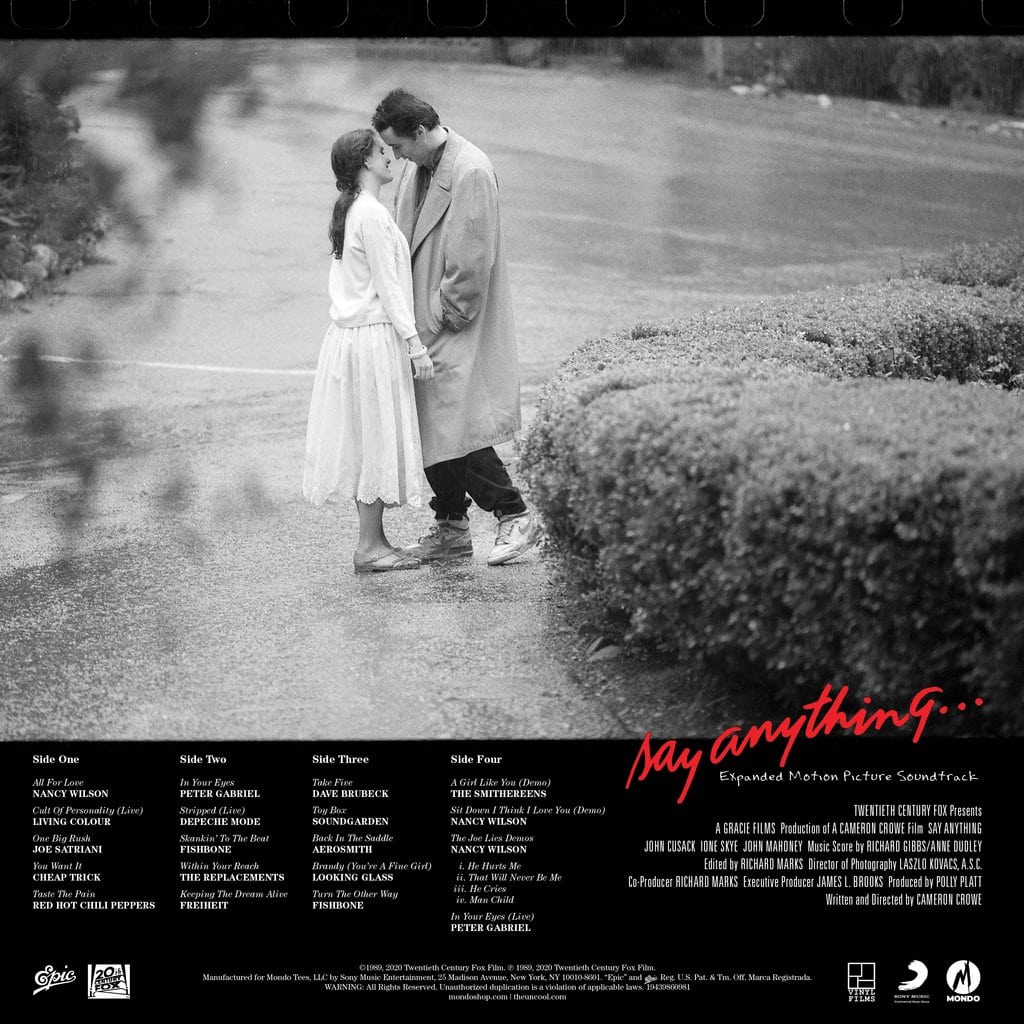 The presentation in this release went more for authenticity. The cover mimics that of the original soundtrack release. That iconic scene with the boombox. While Mondo often gets great artists to make original artwork that fits the release, in this case, the original album cover works fine and gives it an authentic 1980’s feel when it’s sitting on the shelf. Inside, you will find a 16-page booklet, containing never before seen photos and liner notes with the film’s writer/director Cameron Crowe, stars John Cusack, Ione Sky, Lili Taylor, and composer Nancy Wilson (you may recognize Wilson as half of the duo that made up the band Heart). It’s full of little extras you audiophiles will no doubt love. 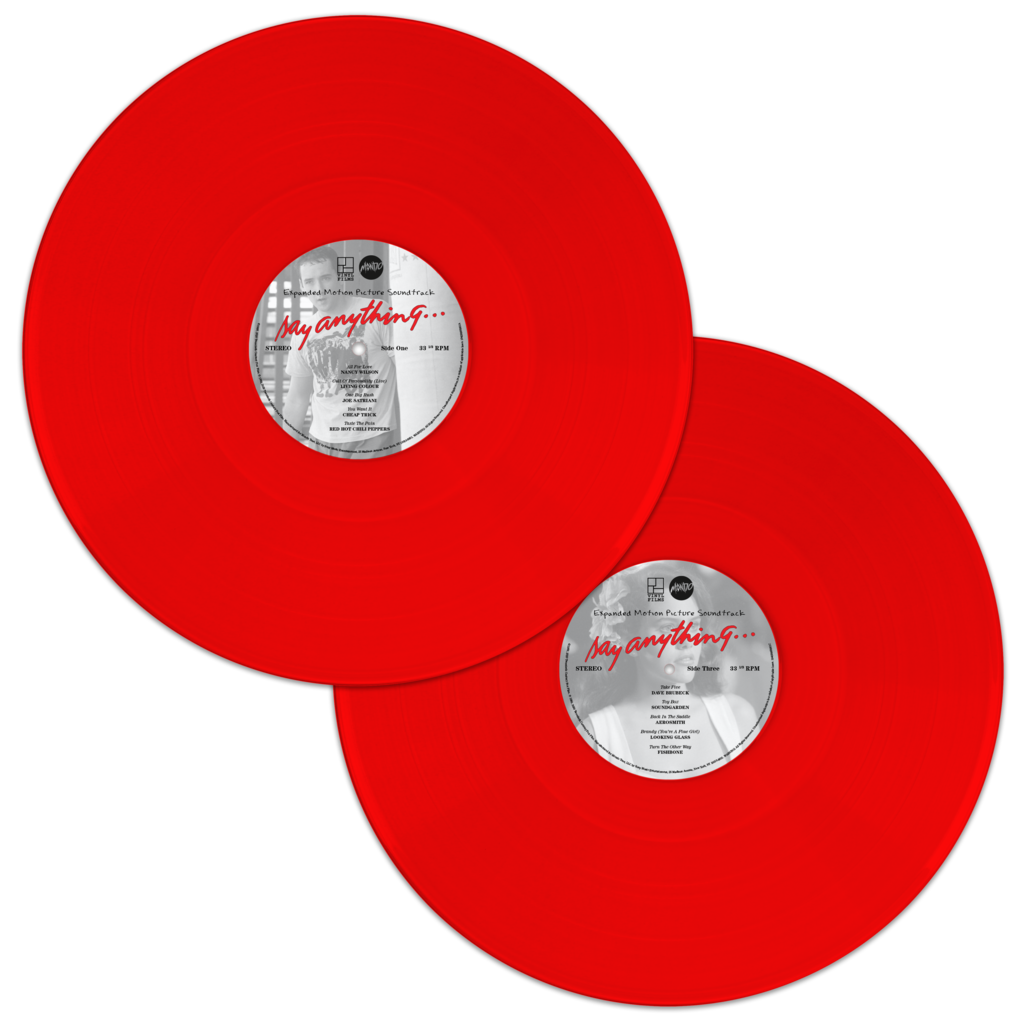 Quality-wise the record is excellent. The music has been newly remastered, and it comes through. Everything is clean, crisp, and I go no popping or hissing so often associated with LPs. As for the music itself, you are probably going to love it. It includes that song we already mentioned a time or two, “In Your Eyes.” In fact, it offers two versions of it. The recoding version and a live version, in my opinion, offer a better sound to Peter Gabriel’s voice. In addition to that, you get a ton of great music from the era from bands like Living Colour and Cheap Trick (a personal favorite of mine). One thing that really stands out for this release is that in addition to the original soundtrack album you get a full disc of additional music. This includes demos written and recorded for the film that have never been released before including the “Joe Lies” songs performed by Nancy Wilson for Lili Taylor. If you want something you can literally get nowhere else this would be what you’re looking for.

Side Four – Bonus Tracks and Demos

Overall, this is a great addition to any record collection. I personally love the music of the era but was very excited about the unreleased music that was included. A lot of times music is not used or included for a reason (being it’s not that good) but in this case the music is excellent, and I think the filmmakers just didn’t have a place for it. Now they do!