Bingeing these Christmas episodes by season with friends of your own will definitely bring the joy of the holidays into your home.

Every season, except Season 10, has a holiday episode. Season 7 actually has two! They cover both Christmas and Hanukkah.

Here’s the order you need to queue up the episodes if you want to watch the Friends Christmas episodes in order.

The One With the Monkey

This Friends Christmas episode gives us one of the most beloved Friends characters: Marcel the monkey.

Ross adopts the capuchin because he’s sick of being lonely. He doesn’t want to get a roommate, so the next logical step is getting a monkey, apparently.

The gang promises not to bring a date to New Year’s Eve, and they all break their promise, except Ross. Unless you count Marcel as a date.

The One With Phoebe’s Dad

Since they’re short on cash, Monica and Rachel decide to give cookies instead of money to the paperboy, mailman, and superintendent as Christmas presents. In exchange, they get crushed papers and packages.

Phoebe makes the shocking discovery that what little she knew about her biological father was wrong. The picture she has isn’t even of the right person. Her grandmother tells her where he lives. Phoebe brings Chandler and Joey with her to meet him, but she decides she isn’t ready at the last minute.

The One Where Rachel Quits

When Gunther tries to retrain Rachel on waitressing, she decides it’s time for a change. In this Friends Christmas episode, Rachel quits her job at Central Perk.

Ross accidentally breaks a girl scout’s leg, so he sells her Brown Bird Cookies, lest she not raise enough to go to Space Camp. 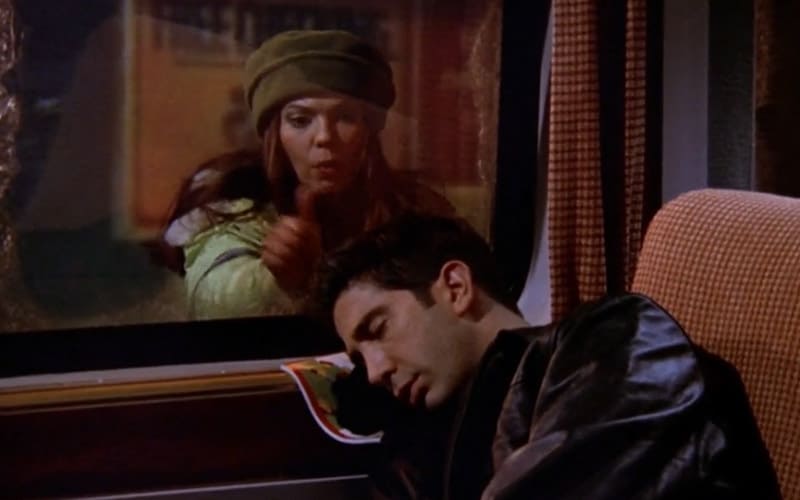 The One With the Girl from Poughkeepsie

Ross starts dating a girl who lives in Poughkeepsie, and even though he likes her, he’s concerned about the distance.

Rachel wants to have a holiday fling, so Chandler agrees to set her up with someone. When his coworkers realize Rachel wants a one-night stand, he starts getting bribes for the opportunity.

Monica doesn’t feel respected at work, so she hires Joey so she can fire him. He ends up loving the job and won’t cooperate.

Phoebe works her hardest to create the perfect Christmas song for her friends.

Oh, and Joey also breaks his personal record for the number of Oreos in his mouth at once.

The One With the Inappropriate Sister

Ross gets bored when he has time off from work, so he agrees to help Joey write his movie. It, of course, goes poorly.

Phoebe volunteers to collect donations for the poor, but when she only receives rejects, she grows stern with the potential donors.

Rachel goes out with Danny, and all seems to be going smoothly until she discovers he’s a little too close to his sister.

The One With the Routine

Janine is hired to perform at the pre-taping of Dick Clark’s New Year’s Rockin’ Eve. She invites Joey, Ross, and Monica to join. Ross and Monica are so excited about their chance to be on TV. But the camera tries to avoid them, as they aren’t quite as good at dancing as they think they are.

While they’re focusing on trying to get famous, Joey plans to kiss Janine when the clock strikes fake midnight.

The One With All the Candy

There were actually two Season 7 episodes that involved the holidays.

The first involves Ross’s son Ben getting a big kid bike. Phoebe admits that she’s never had her own bike. Ross gifts her one, but it becomes very clear very quickly that she’s never learned to ride.

Monica decides she wants to be closer with her neighbors, so she makes homemade candy to share. This turns out to be a mistake, as she can’t keep up with the mob outside her door.

The One With the Holiday Armadillo

The second holiday episode for Season 7 makes up for the lack of a Christmas episode in Season 10.

Ross’s son Ben spends the holidays with him, so Ross decides he’s going to teach Ben about Hanukkah. Ben panics because he can’t imagine a holiday without Santa.

To fix this, Ross runs to the store to get a Santa costume. Of course, they’re all rented out, so Ross gets an armadillo costume instead. This obviously doesn’t reassure Ben that Santa is coming.

Phoebe is getting her apartment rebuilt after it was torn down by a fire. Rachel was living temporarily with Joey, and Phoebe fears Rachel won’t want to move back in with her when the apartment is done. She gives Joey a drum set and tarantula to make living with Joey look less appealing.

The One With Ross’s Step Forward

Because of her pregnancy hormones, Rachel really wants to get laid. She and Joey realize they could get together for one night, but they decide it would be too weird.

Ross’s girlfriend Mona wants to send out Christmas cards of them together, which makes Ross panic, as he’s not sure where their relationship is going.

Monica and Chandler are supposed to go out with Chandler’s boss for dinner, who Monica hates. Chandler tries to back out of dinner, and panics and says he wants to cancel because he and Monica broke up. Chandler’s recently divorced boss jumps on the opportunity and takes him out to strip clubs.

The One With Christmas in Tulsa

As the penultimate season, it makes sense that this episode is filled with flashbacks.

Chandler needs to spend Christmas in Tulsa to finish up the paperwork for his job. He makes the realization that he’s the only one of the core friend group that hates their work. He sends everyone home, but Wendy stays behind.

Wendy makes a pass at him, and when he refuses, she asks why he isn’t spending his Christmas with his wife. He has a crisis and decides to quit his job and return to NYC. It’s one of the more sentimental Friends Christmas episodes.

What’s Your Favorite of all the Friends Christmas Episodes?

Holiday episodes are run to revisit during that time of year, especially if it’s a show that brings the nostalgia. Of the Friends Christmas episodes, which one is your favorite? Do you love the introduction of Marcel the monkey, or do you love the nostalgia of all the Season 9 flashbacks? Let us know in the comments!