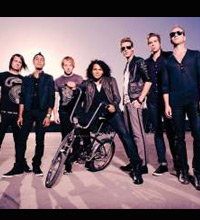 Devin Forbes is the guitarist in the eclectic rock and hip hop fusion band Paper Tongues. We had the pleasure of talking with Devin Forbes about the band’s start in North Carolina, their musical influences, and where Paper Tongues plans to go next!

You guys have a really unique sound. If you had to describe your sound in 3 words, what would they be?

Do you have any musical artists that have been major influences?

Devin Forbes: With seven people in the band, the influences are all over the board. They range from Conway Twitty to Jay Z. We do have influences in bands that have gone before us with a lot of members such as the Roots and Wilco. But, I think we would all agree that our collective influences for what we are trying to do are bands like Journey, Queen, and Led Zeppelin.

So you guys began in Charlotte, North Carolina, how do you think living in the South has influenced your sound?

Devin Forbes: Charlotte has a great music scene that nobody really knows about. It has been amazing growing up as a band here because everybody here is in it for the greater good. It’s not competitive. Everybody is always trying to help each other out with booking shows, writing new tunes, and putting out records. It’s a very strong community here and I don’t think we would be doing it still today if we hadn’t had that from the beginning.

What do you love most about California? And what inspired you to write “Ride to California”?

Devin Forbes: I love the weather in California most of all. I don’t think I’ve ever had a bad day there due to weather. “Ride to California” though, is not so much a song about California as it is a song about going after your dreams. We were all broke trying to do music here in Charlotte and we had an opportunity to meet with Brian West in Hollywood to discuss doing some songs with him. He had found us online through a friend and I don’t think he knew we lived on the opposite side of the country. So, we started borrowing money from neighbors and friends and finally got enough to get over there and meet with him. It was amazing chemistry from the very beginning and he’s been our main producer ever since. So, the song is really about getting up and actually doing what you’ve always dreamed of doing. For us, it was getting a ride to California.

Is there a song that seems the most personal to you out of the ones Paper Tongues have done? Why?

Devin Forbes: Right away I think of a song called “Soul”. I remember I was crashing at Nicolas Balachandran’s house for a week or so. Nicolas has been a producer with us from the beginning. I was sleeping on the couch in the family room and Aswan and Nicolas were just fooling around with some beats in Nic’s bedroom. Then Aswan starts this crazy intense flow over top of it and Nic starts recording it. A few hours later, we had our first demo track. That was really where it all began for us was in that bedroom on that little powerbook. I remember laying there thinking, “oh my God, this is something. This is really something!” I new something big was going to happen from that moment.

How did you come up with the name Paper Tongues?

Devin Forbes: Paper Tongues was the name of a band that Nicolas Balachandran (the aforementioned producer), Cody Blackler, and myself were in previously. When we started playing with Aswan, it was all the old Paper Tongues members but with Aswan as the front man. Nic asked Aswan if he would take on the name and Aswan liked it. After a few months of fleshing some stuff out, Cody and myself were the only original members left, but the name stuck.

Who would you love perform with in the future?

Devin Forbes: Jay Z, Black Eyed Peas, Kings of Leon, just to name a few. That list could go on for days.

When you’re not working on music, what are your favorite things to do? Any must see television series?

Devin Forbes: Everybody is a little different. Some of the guys spend their down time playing NBA Live, Tekken, etc. Some of us like to walk around and see the cities we’re in. I personally like to bring my bike and my skateboard out on the road with me so I can go for a ride or mess around in a parking lot for a bit. You’ll also find me in a coffee shop drinking coffee and reading a book a good deal. As far as TV goes, ’30 Rock’ is the best show in the world. I can’t get enough.

So I read on your bio that the band began forming through Aswan’s event “Inprov Music Experience” where you got together to sing for the homeless? What drew you to creating this event and do you plan on doing more charity work like this in the future?

Devin Forbes: That’s actually how I met Aswan. He put together this event where every Saturday they would set up a P.A. in the center of Uptown Charlotte and musicians from all over the city would come sit in for a few sessions and just improvise for a few hours. Even the Mayor came out one night and played drums. It was a fun way to give something to the people of Charlotte on a regular basis. I would go out to play simply because it had nothing to do with performance, it was just a community of people with a heart for the broken, trying to do something to bring hope back. I would love to do more stuff like this in the future. I’m sure there will always be opportunities to get involved in if we look for them and I’m excited to do that.

What is next for you guys?

Devin Forbes: The plan right now is just to tour as much as possible. We want to play for as many people as we can and touring is the only way to do it. We’ve been on the road pretty consistently for about a year and this year is going to be the same. We’re heading out with the Crash Kings in about a week, and then Switchfoot after that. We’re playing Bamboozle and we have a ton of stuff pending. Aside from that, we’re filming a video for “Trinity” in a couple days and the album is coming out at the end of March which is the most exciting news I can think of right now. I can’t wait to have something to show for the last 3 years of work we’ve done.

Until then, check out the Paper Tongues’ ‘Ride to California’ video below:

Robert Pattinson Stopping By 'The View', A New Comic Book, And More!