“What the heck is this?” is most likely the sort of thing that’s going through your head right now, and I don’t blame you. I can’t actually remember how I found out about Bios Megafauna, but when I did it sounded too amazing to pass up. The basic idea is that each player (from one to four) controls a collection of four animal species. Their goal is to mutate, migrate, and genetically branch-out so that their critters occupy more and more of an ever-changing planet. I was so right about it being too amazing to pass up.

The mercifully tiny box comes with a large fold-out map, a whole bunch of biome and creature tiles representing both the Mesozoic and Cenozoic eras, player species cards that include two dinosaurian and two mammalian groups, mutation cards, Genes (a.k.a. your money), and a heap of tiny wooden animal species counters. It certainly doesn’t look like much – it’s a bit like a really weird Periodic Table at first glance, honestly – but each of those tiles represents an entire ecosystem just waiting for your creatures to move in. Or possibly other creatures who might move in on your turf. And these environments will shift around constantly, occasionally replacing each other, and constantly keep players on their toes if they don’t want any of their species to go extinct. It can be a bit heavy at times, and the rules out of the box are a bit confusing (check out the Living Rules on Sierra Madre Games’ official site for a more up-to-date and clearer explanation), but it’s ridiculously fun and compelling regardless. 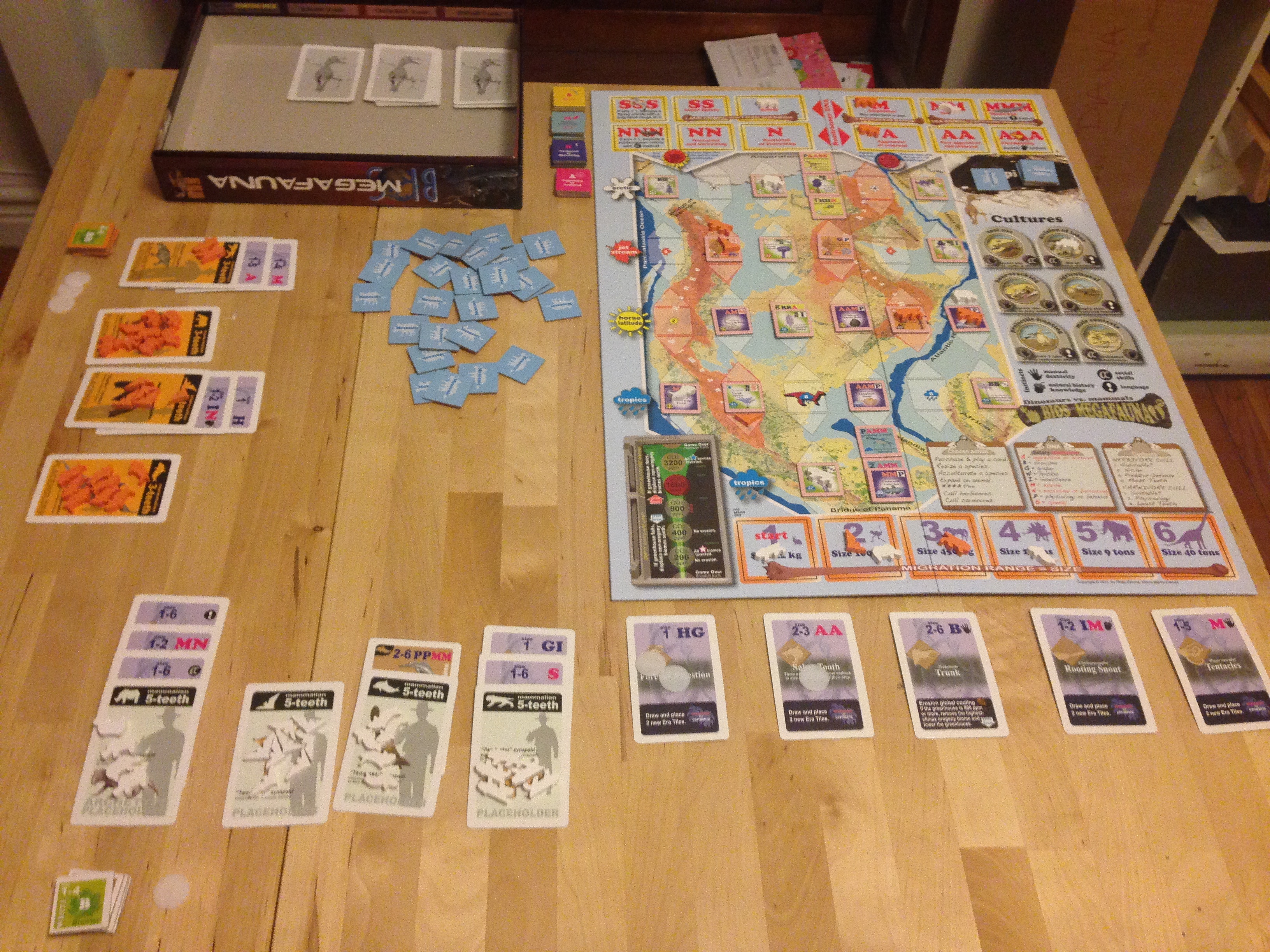 Bios Megafauna has no dice rolls and no hidden information. Instead, everything boils down to the (very large) deck of Mutation and Genotype cards. On a given turn, players may perform a single action: pay for and draw a Mutation/Genotype card, move the size of one of their species up or down one, adapt a new cultural ability (if able), or expand their species into new territory (also if able). Purchasing Mutation and Genotype is where Genes come into play. The first card in the five-card pool is free and can be taken without the need to dip into your bank, but in order to grab cards further down the line you’ll need to drop a Gene on each along the way. So for example if you want the third card you’ll need to drop a Gene on the first and second cards in the line, for a total of two Genes. These Genes will remain on the cards until another player picks them up; so if all the highly desirable cards are at the back the first couple of cards will amass quite a number of Genes, which can then be snapped up by patient players who want some extra currency. Once a card is purchased it can either be played on one of your species (assuming it meets the size requirements), thus gaining the DNA displayed on the card and making it more adaptable to other biomes, or discarded. A new card is then drawn from the current Period Deck (Triassic, Jurassic, Cretaceous, or Tertiary) and its event (the blue text) is resolved. If the Period Deck is empty it also triggers a scoring round in which the player with the most creature tokens on the map takes the majority of the victory points (discarded creature and biome tiles) from the Tar Pit. Most of the time these events will probably mean adding new biomes to the map, but sometimes it could lead to multiple biomes going extinct or even trigger a cataclysm that may cause mass extinctions. Genotype cards actually allow players to evolve into specific species (owls, for example) if they meet the requirements, and give them a chance to branch out with a creature using DNA they might not have been able to acquire otherwise. These cards have two sides (one for mammals, one for dinosaurs) that may only be used by their respective species, and also contain events that must be resolved when they are drawn and added to the pool. 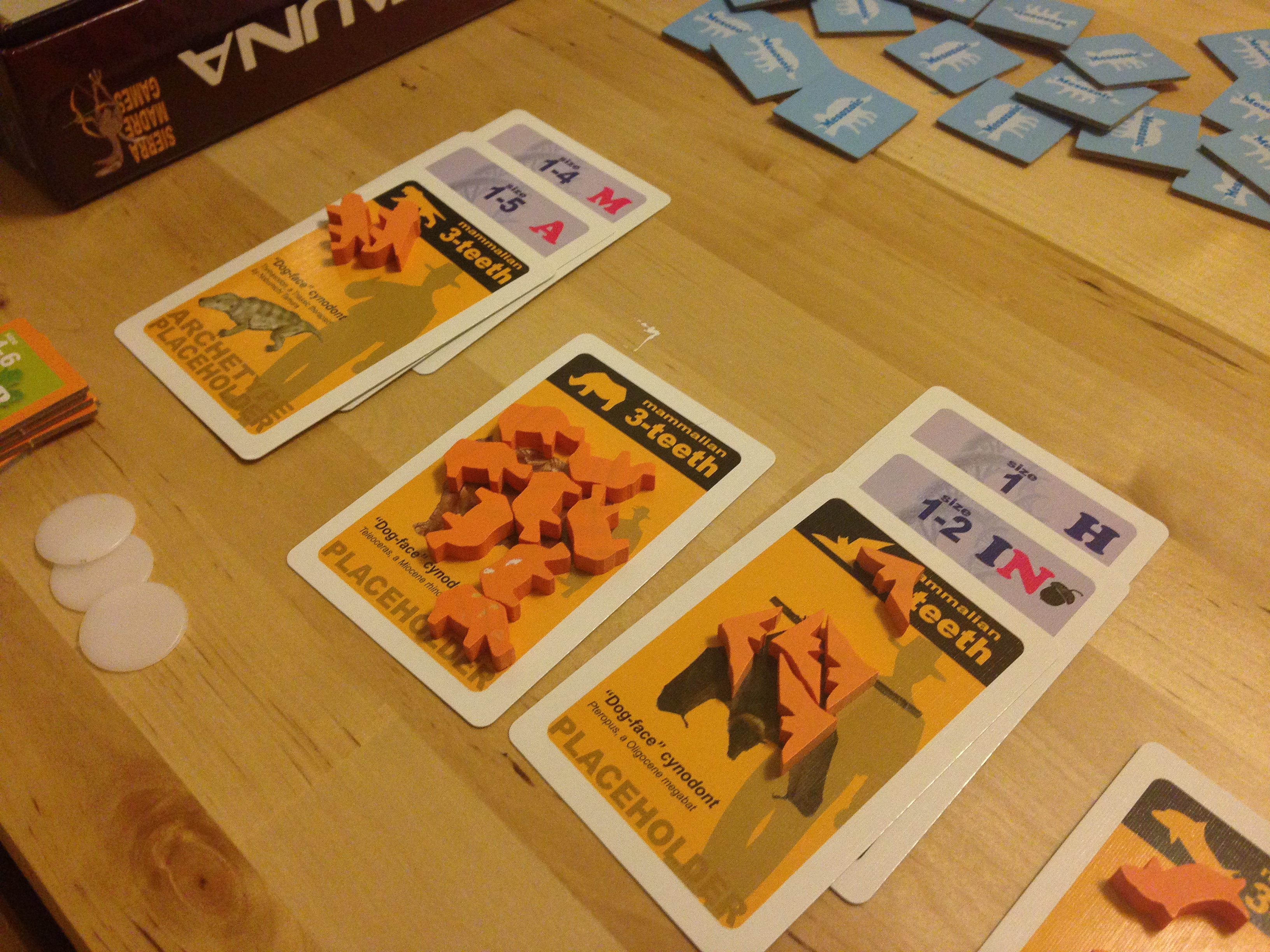 Adjusting the size of your creatures, on the other hand, is required in order to make use of specific mutations as well as hunt different sizes of prey (if they’re carnivorous). Expanding into new territory allows players to spread their species across the map and potentially branch out into new species that may evolve and mutate independently of their parent species, and is essential to gaining points at the end of each scoring round. Cultural advancements are a little more complex in that they require specific pairings of Instincts (the black icons on some of the Mutation cards) to unlock. However, once unlocked they can be a massive help to your species and will offer such abilities as totally ignoring the size requirements on cards and tiles (Tool Use) or allow herbivores to expand into empty map tiles – which are normally considered barren and uninhabitable – near their home tile (Agriculture).

It’s worth knowing the distinction between blue (Dietary) and red (Roadrunner) DNA: Dietary DNA is of the most use to herbivorous creatures as it allows them to thrive in the world’s various biomes. Roadrunner DNA is most helpful to carnivores, and is the sole deciding factor in whether or not they can feed off of their prey. In both cases, so long as the species has the requisite DNA to exactly match or surpass their food (indicated on biome tiles for herbivores and in herbivore DNA for carnivores) they can survive. However if a biome changes and can no longer support an herbivore (i.e. it requires DNA that the creature doesn’t possess), then it dies out. Similarly, if a herbivore develops a new natural defense that the carnivore can’t match, the carnivore can’t continue to eat the herbivore and dies out. And if the herbivore dies out when the biome changes, the carnivore does too because it’s got nothing to eat. It’s important to note that when a carnivore moves into a biome and starts feeding on an herbivore, the herbivores don’t die out. What this actually does is create a balanced ecosystem, with herbivores snacking on the local flora and the carnivores snacking on the herbivores. It is possible to move a new species into an already inhabited territory however, which will result in a contest to see which animal (herbivore or carnivore) will stay and which will die out. 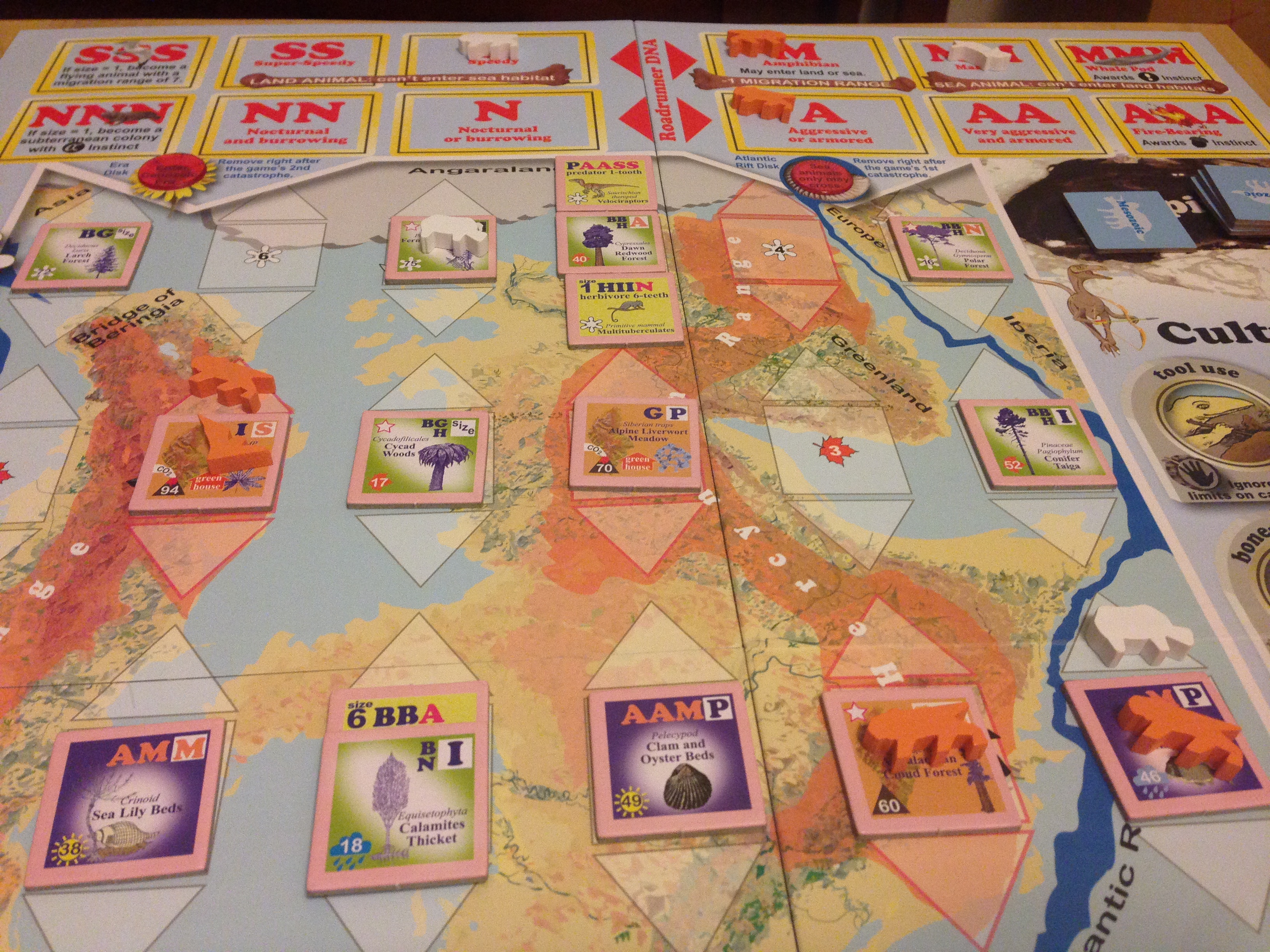 What’s actually pretty brilliant about Bios Megafauna’s use of creature tokens (each species from each color group has the same specific number) is that it naturally limits how players expand. One token is always used to indicate size, but each new track of Roadrunner DNA (of which there are four) also requires the use of a token. As does each new cultural ability. So you could very well have a hyper-species with several cultural traits and significant hunting prowess, but you’ll only be able to put something like three of them on the map. That’s not to say it’s a bad idea to try a jack of all trades approach, but there’s a good chance you’ll come in last for most of the scoring rounds if you don’t at least branch out into another less complex species.

Of course while all of this is happening Greenhouse gases will be fluctuating all over the place, biomes will be shifting up and down the map, asteroids may strike the planet and divide the map into two sections separated by the vast expanse of the newly-formed Atlantic Ocean, etc. The cool thing about all of this is that it’s entirely dependent on the cards drawn to replace Mutations and Genotypes from the pool. So one game could feel like some sort of Apocalypse scenario while another might be surprisingly tame. There’s also no way to plan in advance for these shifts, so while you may have one species spread across several biomes on one turn, several (or even all) of them might die out the next due to unforeseen climate changes. 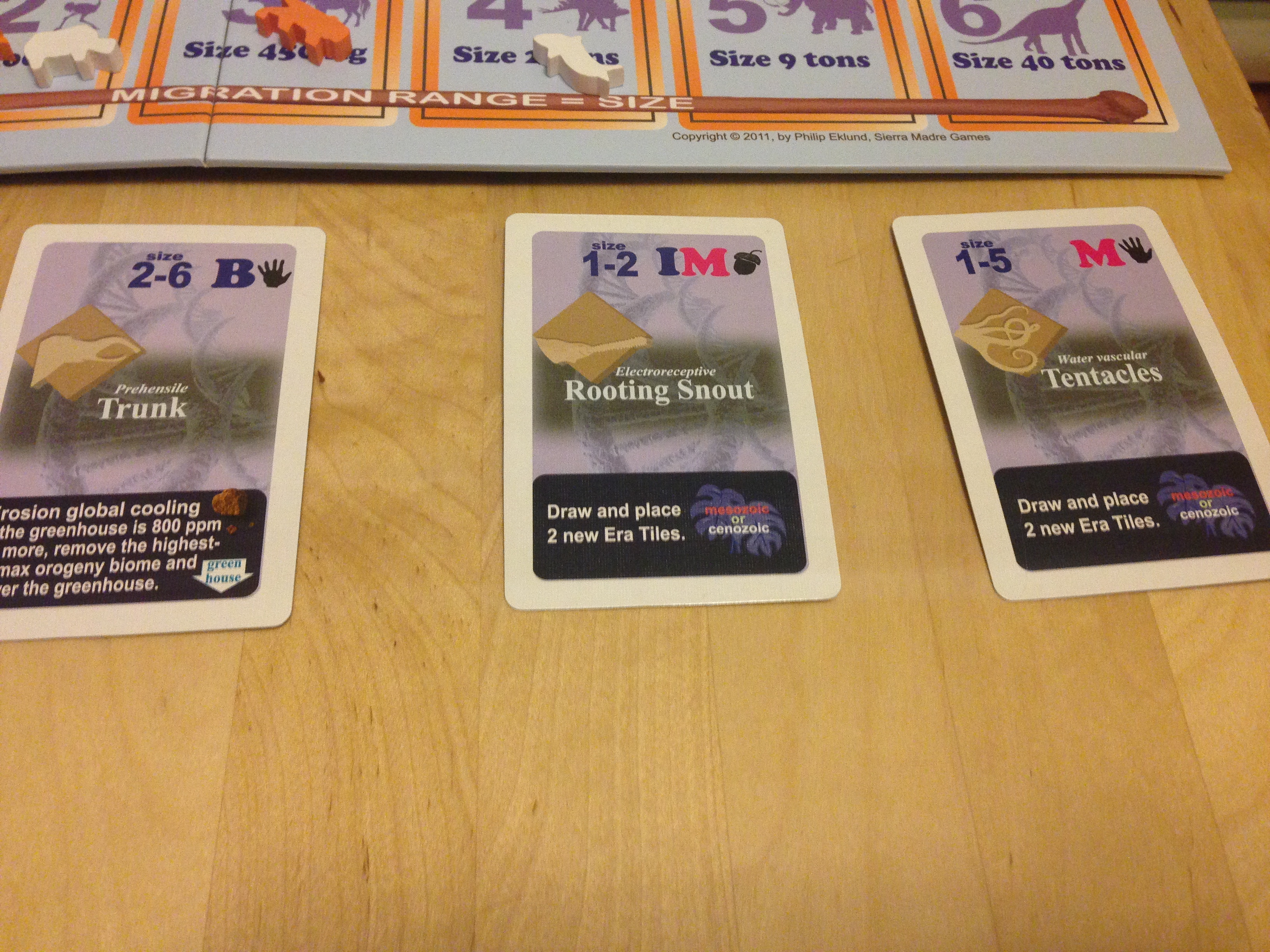 I will freely admit that it can take some doing to get through the wordy and somewhat dry rulebook, and that it might still take a bit to figure everything out, but it’s absolutely worth the effort. Bios Megafauna is the type of game that will probably illicit sneers when it goes onto the table (“No really, what the heck is that??”), but anyone who finds the concept intriguing and is willing to give it a chance will absolutely have a good time. What other game gives you the chance to control a species of saber-toothed doves that have their own language and use bows and spears to hunt animals five times their size? And how could you not want to try it after reading that?