The cockpit smells of burning plastic and circuit boards. The smoke is almost unbearable, almost. I put up a fight lobbing 40mm shells at the Strider who has all but dismantled my poor Atlas with its Plasma Gun. “Come on baby, just hang with me a few more seconds.” I chant it like a mantra trying to keep the Titan on it’s feet and fighting. Another alarm sounds, I have a Rodeo Clown on my back, that’s just icing on the cake. Well at least I can do something about that one, I hit the switch and cloud of electrified fog surrounds me. The alarm dies along with my unwanted passenger. My shields are no better than tissue paper by now, just one more shot and I’m going to have to punch out of here or die with the mech. I just hope the auto eject isn’t one of the circuits that has fried.

My world explodes with blinding light, concussive sound and the view from 200 feet in the air as the AI ejects me out of the dying Titan, at least the air is cleaner. The Strider drops to one knee, it looks like my last shot cored its reactor shielding and it’s about to blow. At least I took the bastard with me, time to run-and-gun, like soldiers have been doing since war was invented.

I control my fall with my jump belt, moving slightly away from the heat of battle. It’s better to land safe and pick how I want to re-enter the fray than to drop in the middle of it. I land on the top of a building 2 blocks away as my cloak, which was automatically deployed when I ejected, just wore off. It’s a good thing I’m down, time see what havoc I can wreak. I bounce like a crazed kangaroo from one rooftop to another, always trying to keep something, anything, between me and the enemy until I’m ready to show my hand. My map shows a whole lot of red dots, Grunts and Pilots, forming up just ahead of me in an alley. I can’t stop the smile from forming, but it doesn’t reach my eyes, it’s as cold as death. I drop two frag grenades in the alley to let everyone know I’m here and it’s time to play. Six dots just disappear from my map, 5 left standing, and I’m sure they are not happy with me. I’m spraying lead and death from my sub-machine gun as I drop in the alley. Luck is with me now, they are all facing the wrong way, and I take advantage of it. I drop three before I hit the ground, one more with a flying kick boosted with my jump belt, the last one is hosing the wall with bullets and slowly turning my way. Too little, too late, he drops and I eject my empty clip to feed in a fresh one. Let’s see how much more chaos I can sow before it’s my time to reap the whirlwind.

Once you finish the massive download for Titanfall (21GB’s) and it finishes installing up to 48GB’s, you can jump in and start playing. However, depending on your download speed, this could take some time. Personally, I started it before I left for work and it was done long before I got home. I think the waiting would have driven me insane with anticipation. The Beta version was much smaller due to there only being two maps to play and limited amounts of, well, everything. This version, however, is huge with lots of unlocks waiting in the wings to change how you play.

Titanfall does not pull any punches when it comes to combat. The matchmaking needs tweaking in order to lower levels a little, keeping you from getting discouraged. When you start out as a lowly level one Pilot, you will be immediately thrown into the fray with some level 30’s and 40’s. What does this mean? It means you’re going to die a lot. They are equipped with better weapons, Burn Cards, cloaks, parkour kits, etc… They will snipe you from across the map or just sneak up behind you and drop kick you to death. You’ll never even know they are there until you are watching the replay of your death on the screen. But all’s fair in love and war. Just keep moving, it’s harder to hit you that way. 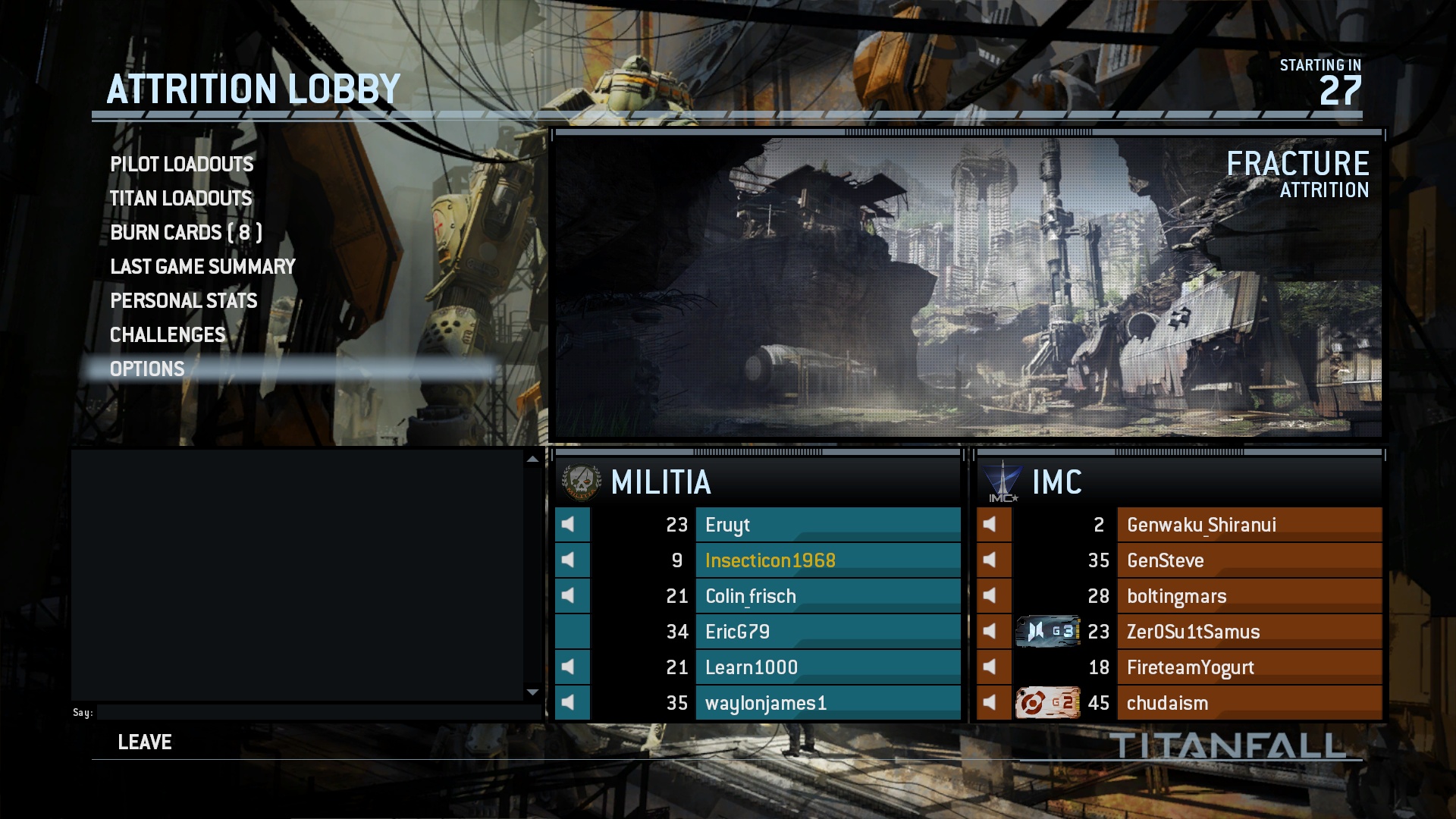 It’s not all bad though, there are now 15 maps and 5 modes of play, which adds a lot of variety. The maps aren’t that big but they do give a great variety of strategic play. They are, in alphabetical order:

When you combine in the five modes of play:

You can have a fantastic variety of game play scenarios. Each of the maps have been modified for all five modes, so if you get used to a map, play a different mode and it’s a new challenge. There is one more mode of play and that’s Variety Pack, which gives you a random mode on a random map just to keep things interesting. While some of these modes are the staple of other FPS’s out there, you may not care with the fast paced action. There is also a Campaign mode to play through, this isn’t single player either, it’s still 6vs6, there is just a story line on top of it. You will have to fight your way through each map with its own set mode to complete it, but there is a reward waiting for you at the end, so don’t dismiss it easily.

If you play just a couple of games a day and you’re more of a casual gamer, you should be able access Burn Cards (level 5) and updated weapons pretty quickly. Get a couple of kills per game while also keeping to the objectives and you should gain about a level a game until you reach level 7. Then things might take a little longer from there, but it’s still pretty quick. Just don’t forget to keep an eye on your minimap, seriously, it’s a huge advantage. The challenge is keeping one eye on the action and the other eye on the map, it takes some practice, but keep at it. 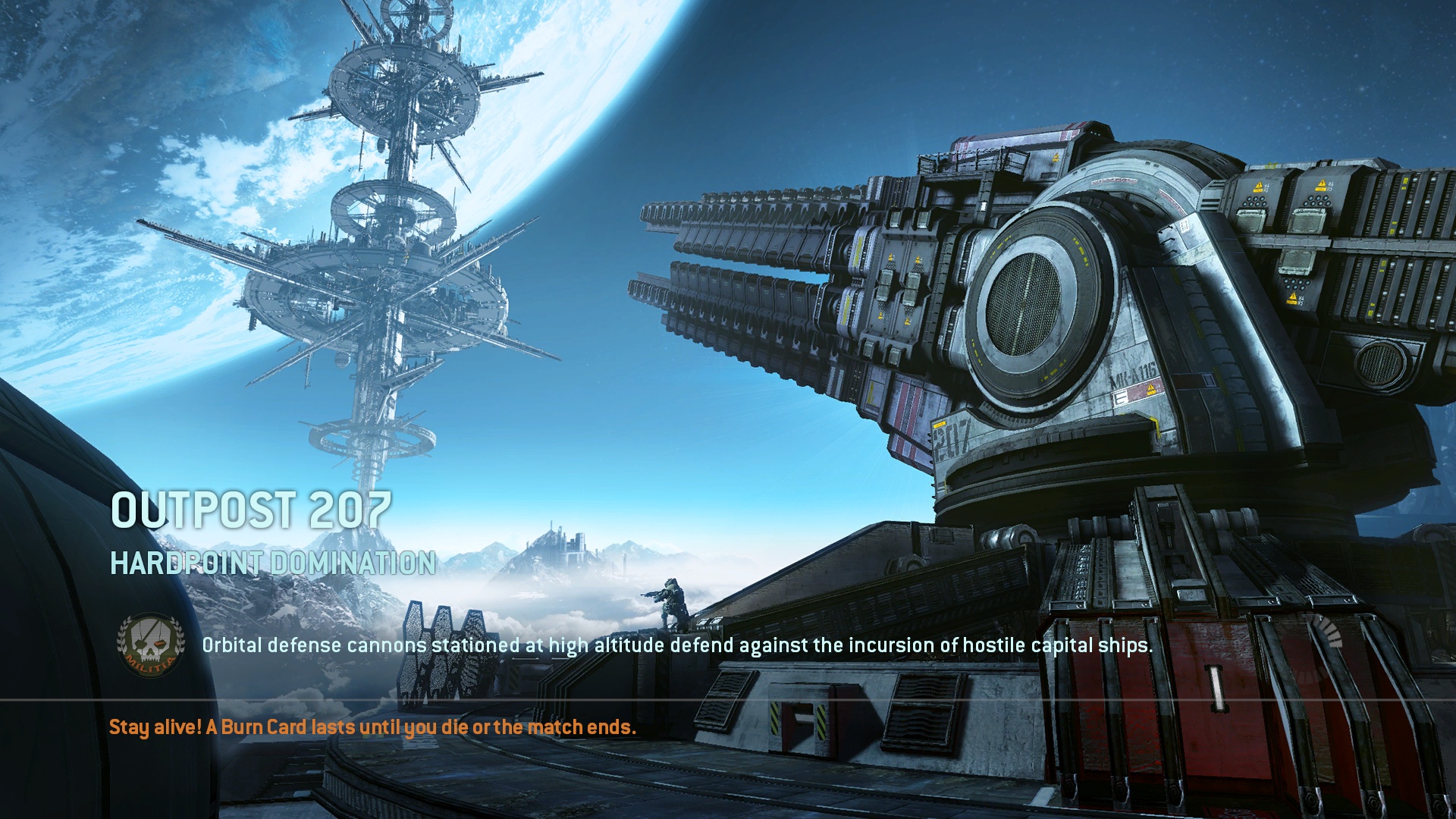 If you like to do your homework before battle there are plenty of strategy guides out there, just use your favorite search engine and you will be able to access enough information to satisfy most Armchair Generals. Depending on your specific style of play (stealth, sniper, run-and-gun, suicidal or whatever it happens to be), there is a way to use the maps to your advantage. You just need to explore and take advantage of the terrain. Not all maps will be perfect for all applications however, so be flexible, have more than one load out for your soldiers and don’t forget to use your Burn Cards as they really can make a difference. But never forget, no plan of action ever survives contact with the enemy. In other words, don’t forget that you are online playing against other humans who have a plan. So be fluid, don’t get frustrated and keep at it.

Titanfall delivers fast-paced action, vertical leaping, wall running, parkour like tricks, double jumping, giant mechs in a package of seamless game play. While the terrain could be more destructible and plants could move around in a more natural way, you may never notice. There isn’t really any time to stand still in this game, and if you do, you’ll be respawning before you know it. Gameplay seems to be very balanced for the most part, and since you have Spectres and Grunts to shoot at to hone your skills, the 6vs6 limit isn’t really noticed.

Conclusion: Buy this game if you like fast paced game play and gorgeous graphics.