I enjoy games with interesting mechanics, and I enjoy games with a well-presented theme. However, it’s not often that I get to enjoy a game that blends both of these elements together, and especially not one that does it as well as Arctic Scavengers.

The world has entered what could best be described as a new Ice Age. Most everything is either frozen or covered in snow, and society as we know it is gone. You and up to four other players are in charge of individual tribes, and will need to hunt for food, scrounge for supplies, attract more able-bodied folk, and fight over resources as you try to survive in this harsh new world. 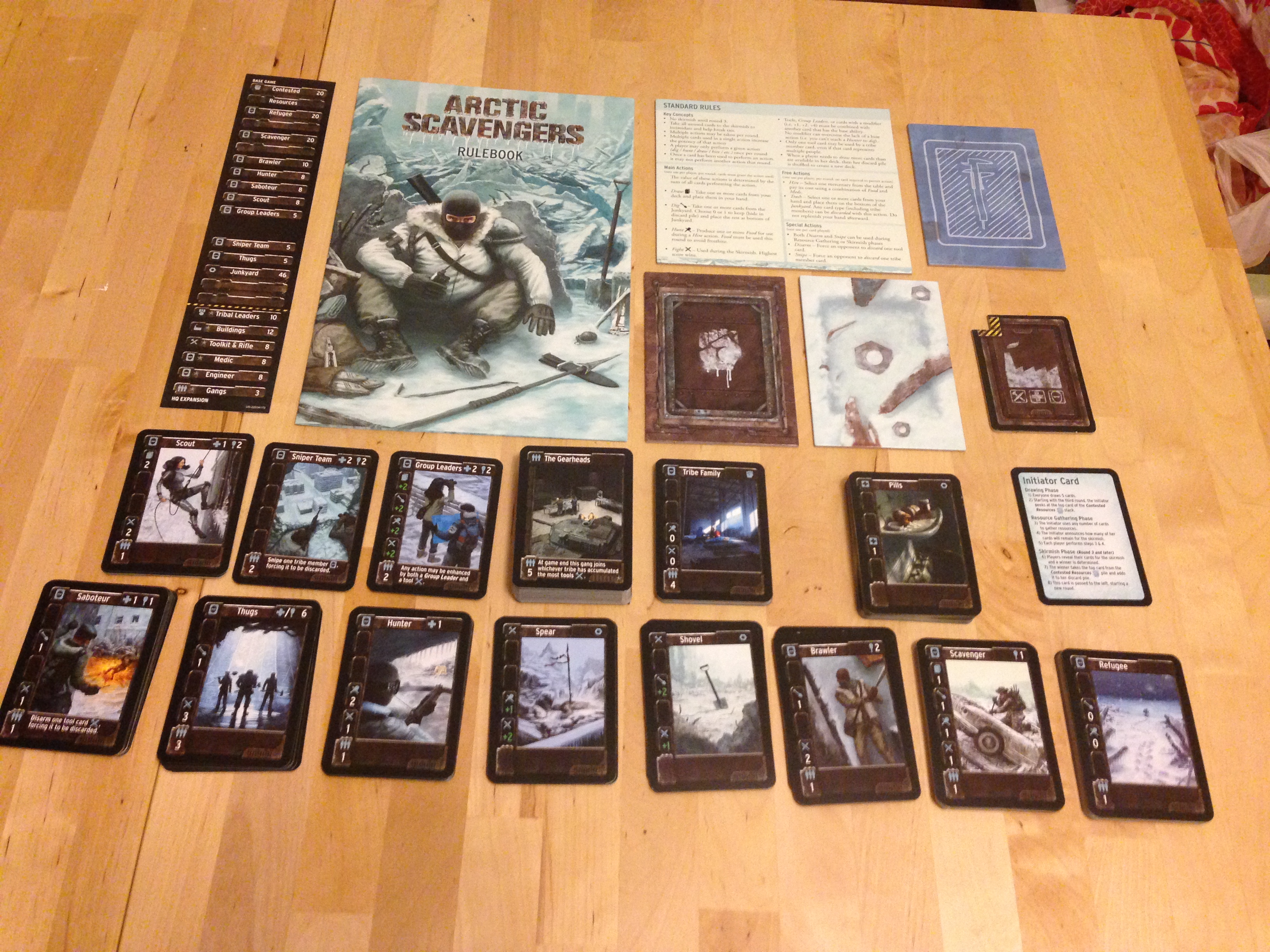 Arctic Scavengers is a deck building game in which, much like other titles in the genre, you’ll be using your starting deck of cards to try and draft more useful cards, then use the better cards to draft even better ones, and so on. Some cards will let you draw even more cards for your hand in order to give you more potions during your turn. Some can be attached to others (i.e. having a Scavenger use a Shovel) to improve their abilities for that turn. It’s all fairly typical stuff on the surface. Once you get past the surface, however, it becomes a totally different beast – and that may or may not drive some players away, as it is a bit more complicated than the average deck builder.

You see, there are two main elements in a basic game of Arctic Scavengers that actually manage to make it feel like a group of survivors locked in a desperate struggle for survival in an extremely harsh environment: Scrap and Contested Resources. Players can “dig” through the scrap pile on their turn, provided they have someone with the appropriate ability and/or a tool to help them, which allows them to draw a card (or even multiple cards) from the pile and keep one if they want. It could be a valuable medkit or tool, or it could be useless scrap – the only way to know for sure is to dig. What’s really interesting is that it also acts as a sort of communal discard pile where everyone can dump the cards they don’t want. It’s also where Contested Resources end up in the event of a tie. Decisions, decisions… 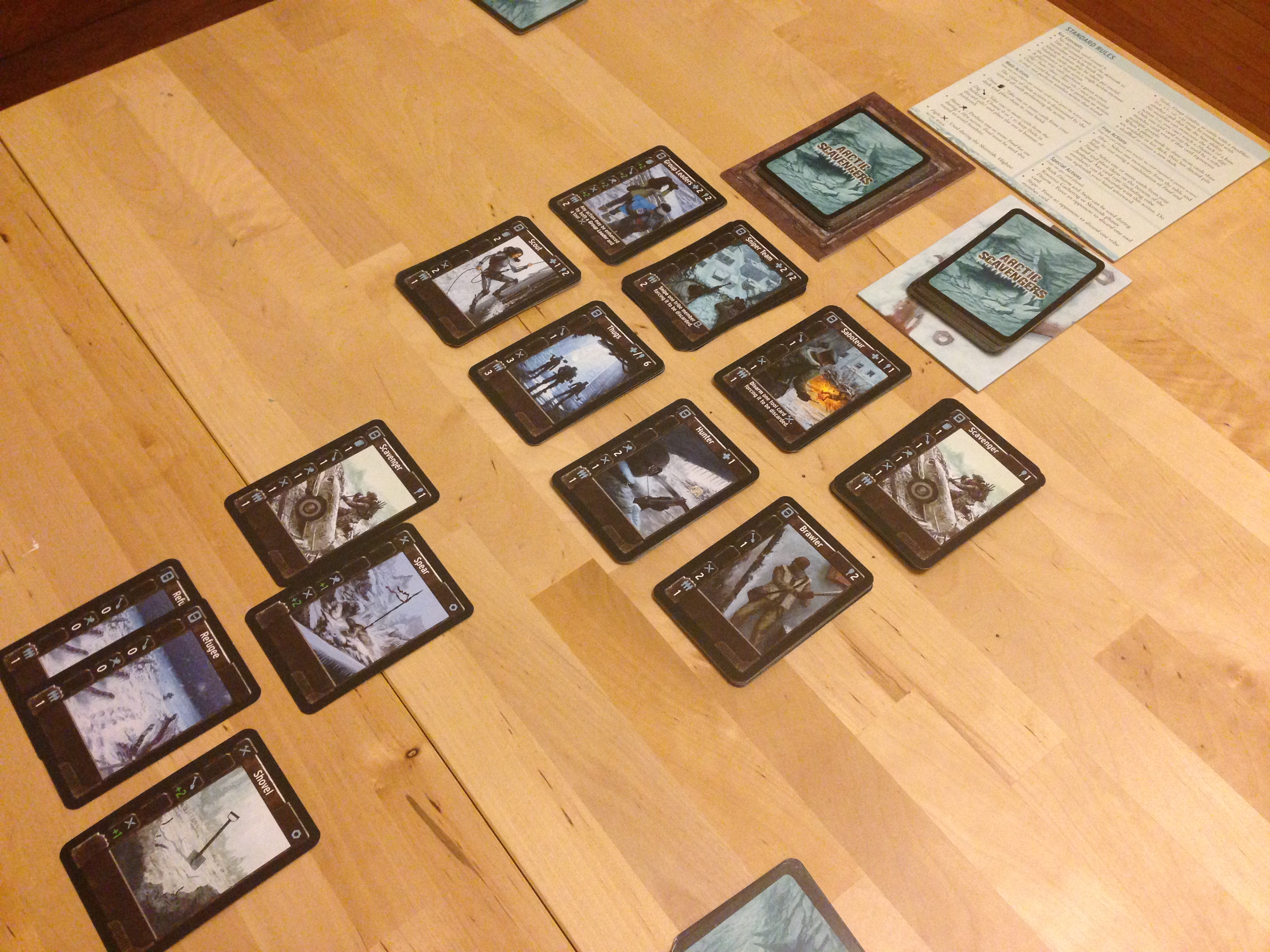 As for the Contested Resources, they’re probably the biggest reason I’ve been enjoying Arctic Scavengers as much as I have. The way this works is every player takes a turn digging through the Scrap pile, hunting for food (i.e. earning what you need to draft a mercenary from the offer piles in the center), and so on. Once they’ve finished, they’ll be holding back their unused cards for “The Skirmish.” Once every player has had a turn, they’ll reveal their remaining cards and the player with the highest combat total will win the card off the top of the Contested Resources pile. These cards are always extremely beneficial in one way or another, so there’s a good chance you’ll be fighting tooth-and-nail for them. Or maybe you won’t? Maybe instead you’ll spend the early game bolstering your forces and letting everyone else worry about fighting. Then you’ll be in much better shape to best them in combat later. Or maybe you’ve had a bad draw but you still really want whatever is in that pile? In that case you can hold back most (or even all) of your cards for The Skirmish as an attempt to bluff the other players out of even trying.

All of this fits beautifully with the “arctic apocalypse” theme, and is echoed in the cards. And wow, those cards. The illustrations are fantastic, the iconography is incredibly easy to read, and the game comes with its own expansion already in the box. I’m not even kidding: what I’ve just described above is the base game. You can also add all (or some) of the extra cards to change things up significantly. There are tribe leaders that will give each player a unique ability (and can, of course, be targeted by enemy snipers). There are buildings you can construct to house up to two cards of your choice that can be pulled out on turns when you really need them. There are even boards that have been included that you can place the various special decks on and use as handy indicators. It’s really incredible stuff, and the box has more than enough room for all of it (and more). Yet it’s actually a pretty reasonable size so it shouldn’t create space issues. 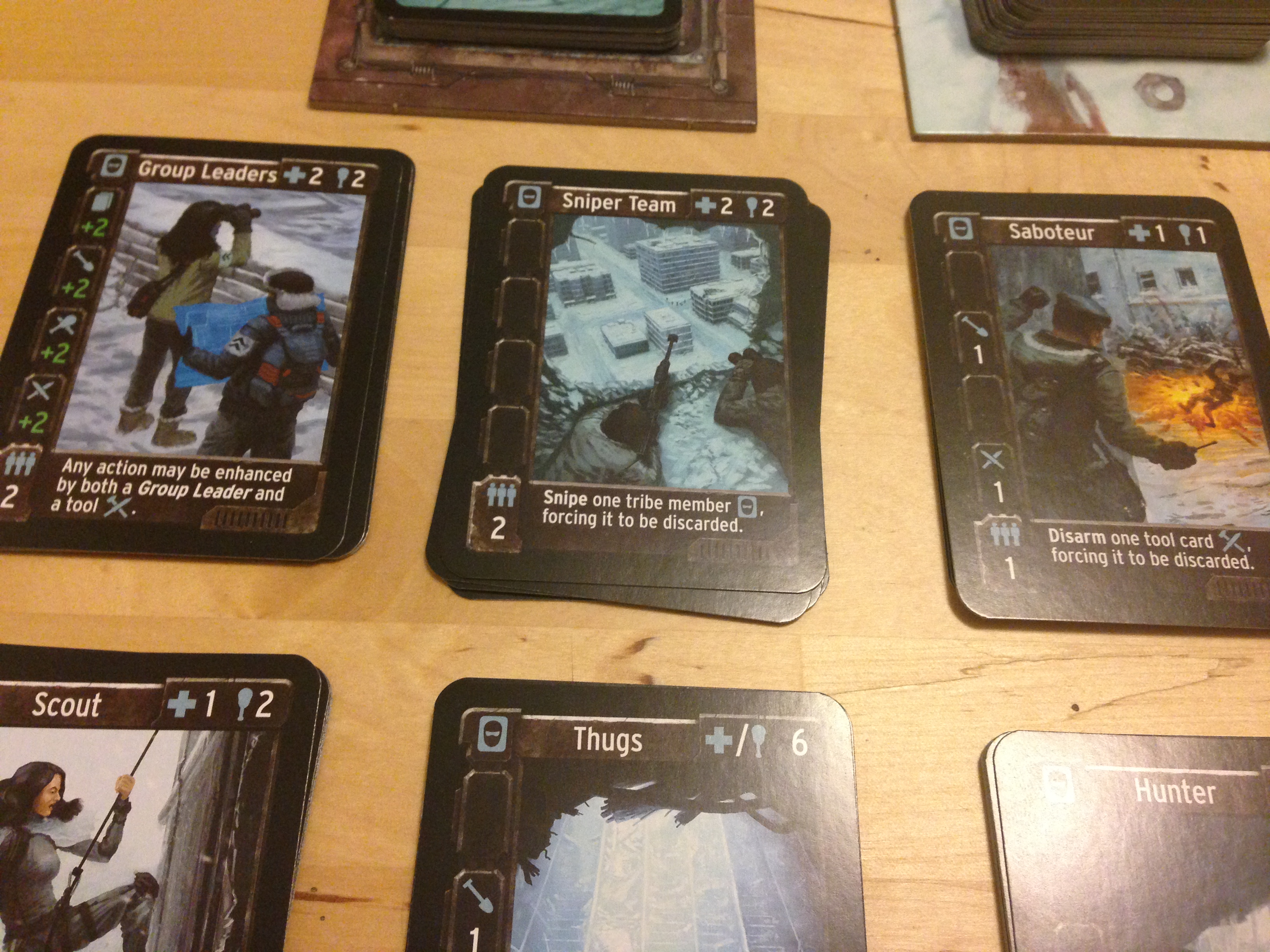 Arctic Scavengers is an incredibly cool deck builder that fits its theme perfectly. The Skirmish over Contested Resources, digging through the Scrap pile, and even the basics of hunting for food to draft more cards add a very interesting and dynamic flair to everything. And that’s all without even including the extra optional bits that come with it.