Released as a spinoff to Arc System Works’ BlazBlue series, BlazBlue Clone Phantasma is quite the departure from the main series it came from. While the BlazBlue series is more recognized for its fighting game installments, Clone Phantasma is more of an action brawler game with a chibi-artstyle, and actually is a sequel to an older DSiWare spinoff. This 3DS downloadable title can be enjoyable, but overall is a really lacking package.

To those familiar with the BlazBlue franchise, the characters and music should feel mostly at home. I say mostly because, due to the nature of the game, you don’t have the full movelists to work with. Being an action/beat em up game with simplified controls, you won’t be using a vast majority of the attacks found in the main fighting games. That’s not necessarily a bad thing, as the controls work well for the game. Each character has a basic attack button, for most characters this allows use of a small combo of 2-3 hits, as well as the ability to use a jump attack. Characters also have a specific Drive attack as well, think of these as your main special move included in the game. The closest thing this game has to a super move in a fighting game would be the Blast Drive attack, which tends to be the most powerful move at your disposal. An interesting mechanic this game has is the Bokosuka Gauge. As the Bokosuka Gauge increases, your attack strength will also increase. The gauge itself goes up as you get hit by enemies and by using your powerful Blast Drive attack. However it’s best to use your Blast Drive only if you really need it, as using it while you’re at Level 3 (the max level on the Bokosuka Gauge) will temporarily stun you, leaving you wide open to getting hit and potentially knocked off the stage. The small selection of small characters includes Ragna, Jin, Noel, Taokaka, Rachel, Hazama, Bang, Makoto, Platinum, and Izayoi. Each character’s attacks in Clone Phantasma is inspired by their attacks from the fighting games, and most characters are enjoyable to use. Music in the game comes straight from BlazBlue Chrono Phantasma, which had a solid soundtrack to it. 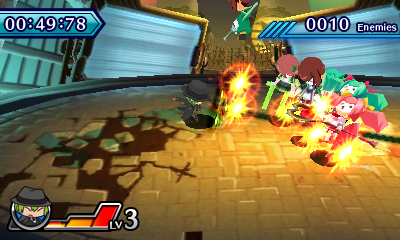 Blazblue Clone Phantasma has two main modes for players to experience. The first of which is Story mode. There isn’t a whole lot to this game in terms of story, the main overarching concept is that clones are attacking, and the characters are trying to get to the bottom of it. You play several stages in which you knock armies of clones off the stage using your attacks, and fight a few boss battles along the way. It’s a very short mode, it won’t take you too long to clear one of the character’s stories. It’s also worth noting all the stories share an almost identical structure; some levels, a boss at the end of one, and keep going until you fight three. Also, each final boss has the same second phase gimmick to it. Also, the timing of when you fight each boss is the same across all characters’ stories. The only difference in that regard is which characters fight which other characters for their bossfights. As a result, Story mode serves to be an extremely underwhelming mode, due to it’s extremely short length and lack of difficulty. If you feel like testing your skills, Challenge mode is more serviceable. This mode essentially is a survival mode, keeping track of how many clones you defeat and how long you last on your single life. There also is a Gallery mode that allows players to view unlocked story mode illustrations and in-game awards, but there isn’t much to view there. 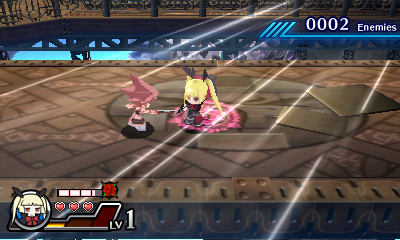 BlazBlue Clone Phantasma is a budget priced 3DS downloadable title, and you pretty much get what you pay for in that aspect. While combat is fun, you only get two modes to play between your standard survival mode antics and a very underwhelming story mode. There’s also unfortunately no multiplayer in this title of any sort, no versus or co-op. The lack of multiplayer especially feels like a missed opportunity, it could have been fun to team up with some friends to take down an army of clones. It just feels a little unfortunate that this game might not have the longevity of other titles due to the very limited modes.