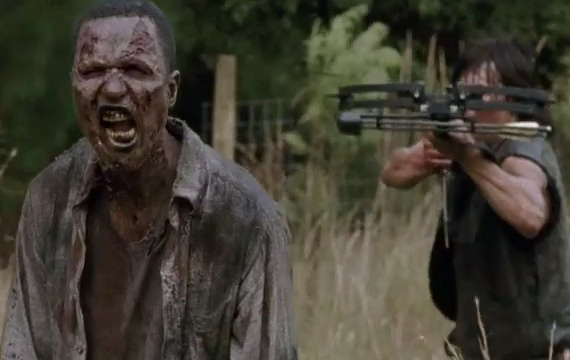 If you’re attending Comic-Con this week and you’re a fan of The Walking Dead, then you are in for a treat!

Skybound, Robert Kirkman’s multiplatform entertainment company, has partnered with Walker Stalker Con and Twitch, the world’s leading social video platform and community for gamers, to bring fans the Walker Stalker Fan Fest this weekend. The event will showcase new interactive and gaming experiences, so if you want to check it out, be sure to swing by Petco Park on Saturday, July 11th between 11:00 am and 10:00 pm.

“We felt the best way to celebrate Skybound’s 5th Anniversary was by throwing a Walking Dead party at Comic Con with all of our friends,” said Dan Murray, President of Skybound Interactive, in a statement. “We’ve joined forces with Walker Stalker to deliver the ultimate Walking Dead Festival at Petco Park stadium, while partnering with Twitch to live broadcast it around the world. There will be more than a few surprises and several world premieres announced at this extravaganza. Whether you enjoy experiencing the horrors of The Walking Dead in virtual reality from the folks at Starbreeze, running through the bowels of the stadium in the return of Walking Dead Escape, engaging with Superfight online or watching a special live performance from the actors of Telltale’s The Walking Dead, there will be a little bit of Dead for everyone.”

Saturday’s events will include video game reveals and tournaments, virtual reality demos, and a special live performance by the actors of Telltale’s The Walking Dead at 8pm. You’ll also have the chance to hang with your favorite Twitch personalities, including Bajheera, Swiftor, Ezekiel_III, Wootystyle, Pokket, and Clevagurl with Marcus “djWHEAT” Graham, Twitch’s Director of Programming, hosting the show.

If you can’t make the party, don’t worry. The Fan Fest will continue all weekend.

Check out the flyer below for more details! 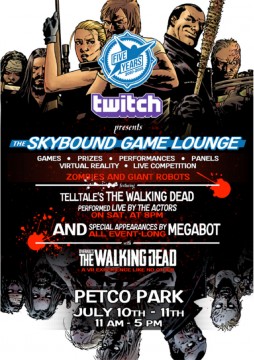