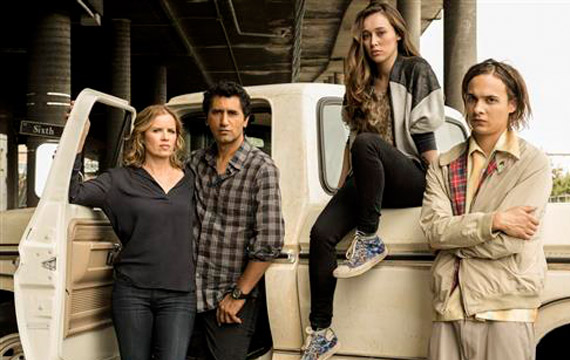 Fear The Walking Dead will premiere on AMC in a few weeks and we’ve got some chilling new promo clips to mull over, ahead of the new information we’re sure to learn at tomorrow’s Comic-Con panel.

The Walking Dead companion series will give fans a look at the side of the apocalypse they didn’t get to see in the original. Since Rick was in a coma during the onslaught, TWD fans only got to see the world once it was full-on overrun. The new series, however, will take audiences through the madness from the very beginning, which we’ll see in the promos below.

Showrunner Dave Erikson recently teased some details about two of the show’s main characters, Madison (Kim Dickens) and Travis (Cliff Curtis), saying “…the goal was to establish a strong couple. They’re not married yet: He’s divorced, her first husband passed away several years ago, and the idea is they have the quality of soul-mates. They met each other, they’re strong for each other, they compliment each other in the best way. What I love about that is that it’s taking this very fundamentally sound relationship and then seeing how the apocalypse changes that.”

Watch the three new creepy teasers, featuring what we can only assume are the VERY unfortunate souls who’ve transitioned to walkerdom, below:

If you’re attending Comic-Con this week, make sure you stop by the Fear The Walking Dead panel, happening tomorrow, Friday, July 10 from 1:00-2:00pm

Look out for the series premiere, coming to AMC in August.