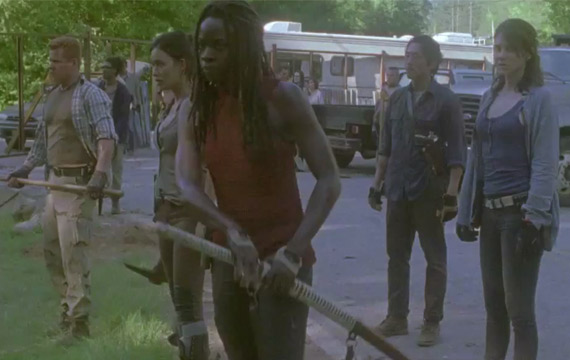 Is Rick the new villain in The Walking Dead‘s sixth season???

Judging from the newly released Comic-Con trailer, it looks like he could be. “I know Rick, I can stop him. We have to,” is what we see Morgan telling Deanna and (what we can assume are) a small group of Alexandrians. The fact that Rick’s former friend now appears to be a current frenemy doesn’t bode well for what’s in store for him this season. Hopefully Morgan will work on trying to pull Rick back from the brink of insanity, like a certain someone did for him back in the day.

Remember when TWD showrunner said that we’d be seeing ” multiple threats” this season? Well I don’t know about you, but I definitely didn’t think that Rick would be one of them.

We also get a glimpse of a not-so-safe Alexandria, so I guess we can count on walkers breaching the wall at some point. Another threat. Oh and Darryl gets captured…No Darryl around? Yet another threat.

The most important piece of info we get from the new trailer, however, is a season premiere date! The show returns to AMC on October 11th, which means we still have about 3 months to go…but at least we can officially start the countdown!

Watch the intense full trailer below:

Let us know your theories about what dangers lie ahead in the upcoming sixth season of The Walking Dead.

'The Originals' Cast Talk Season 3, Who's Returning and More at Comic-Con 2015