Deus Ex: Mankind Divided is a really fascinating game that continues the story to another game I love, Deus Ex: Human Revolution. In my review for Deus Ex: Mankind Divided I mentioned how I didn’t really come across many great spikes in excitement, but that I also didn’t find myself board at all. It’s one of those experiences that is solid all the way through with an intense and unique atmosphere that is felt throughout the entire campaign. I really love the game and the series.

With that said I made sure to go one step further for showing my love for Deus Ex by getting a hold of the Deus Ex: Mankind Divided Collector’s Edition. 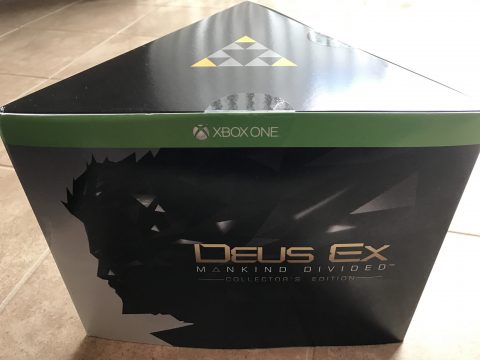 The Deus Ex: Mankind Divided Collector’s Edition is a great purchase for any fan of the game or series. It comes in a lovely designed collector’s edition box that’s also worthy of the shelf, depending on how the owner wants to display their items.

Once I took the cover wrap off the side of the collector’s edition box the owner is then presented with a lovely black prism box with a gold line that outlines where the top and bottom pieces of the box separate. It’s really nice to look at for sure. And once I opened the box and saw the items inside, along with the statue of Adam Jensen, I was tempted to leave everything as is right there in the box for display. It’s that lovely to look at. However, after taking a few pictures, I decided to take out each item instead to place on the shelf. 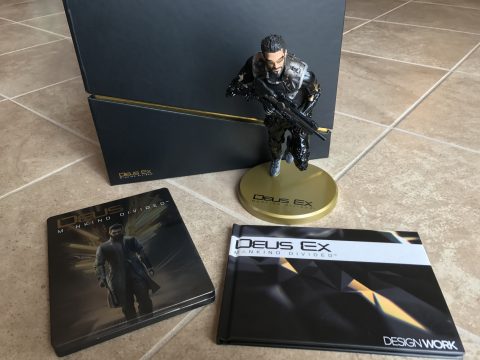 The first item I pulled out was the Deus Ex: Mankind Divided Steelbook case which has such an awesome cover design that it looks absolutely gorgeous on the steel case. This one definitely looks great on the shelf! Inside the case is the Day One edition of the game that comes with a lot of digital content as well, including the Classic, Enforcer, and Intruder in-game DLC packs, as well as a digital novella, a digital comic book, an extra in-game mission, a digital artbook, and a digital OST sampler.

Next I grabbed the Design Work 48-page hardcover art book that opens up with a brief introduction from the Executive Art Director and Art Director behind the game. It’s a small and brief art book that provides a glimpse at some of the concepts behind the characters, environments, augmentations, weapons, and more in the game. 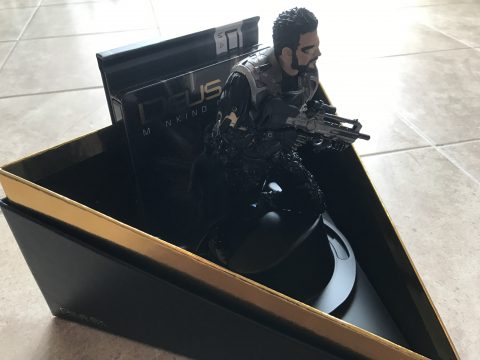 The final item in the box is the 9-inch Adam Jensen figure that features a good amount of detail, especially his upper body and face. One of the coolest features with the statue is that Jensen is currently in the process of activating his Titan Shield augmentation which shows up on a good portion of the figure.

I really love the detail and look of the 9-inch Adam Jensen figure as he’s in the motion of running toward combat. He also holds a gun that looks awesome as well. And the coolest part about that is that the gun also comes with a silencer that can be attached or removed. When you play Deus Ex: Mankind Divided, are you playing with stealth or with bullets flying loudly? 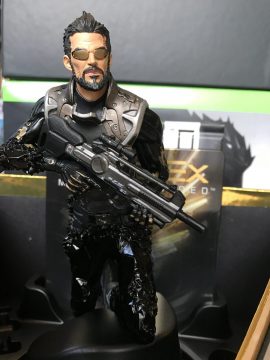 The Deus Ex: Mankind Divided Collector’s Edition is a great collector’s item for all fans of the Deus Ex games. I can’t see anyone being disappointed with this collector’s edition. The box is beautifully designed, the Steelbook case is awesome, the art book is decent, and the 9-inch Adam Jensen figure is one of the coolest out there. Plus, it’s great to have the Day One edition of the game with all of its digital content.

I’m absolutely a big fan of this collector’s edition and its overall quality.