From Game of Thrones to a zombie tour and tasty wines, we’ve got the fans in your life covered with FanBolt’s 2017 Geek’s Guide to Valentine’s Day!

Check out our Valentine’s recommendations below, and in our comments section, share with us what items are on your wish list!

For The Game of Thrones Fan 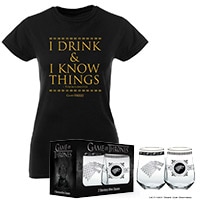 Game Of Thrones Memorabilia – Whether the fan in your life wants to be loud with their fandom or if they want to keep it subtle – there are some fantastic options from HBO for Game of Thrones! We recommend the “I Drink and I Know Things” gift pack – which isn’t really a gift pack but you should definitely buy these items together. Not only will it make your GoT fan giggle, but pair it with a good red wine (GoT will soon have a wine collection released) – and your V-Day shopping is done. Is your GoT a beer drinker instead? No worries, we still got you covered!

For The Marvel Fan 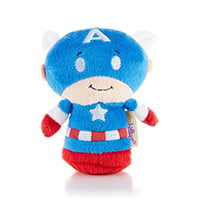 Marvel Itty Bittys – Need a small but awesome gift for the Marvel fan in your life? (This may be better suited for a girl, as all the girls at FanBolt adore them.) Hallmark has a line of Marvel itty bittys which include: The Incredible Hulk, Iron Man, Captain America and Spider-Man. They’re the perfect small gift, and you can even buy them in sets for $29.95.

If Marvel isn’t your thing, they also have Star Wars, DC Comics, Disney Princesses, and more for you to pick from. You can check out all the collections offered on Hallmark’s website.

And if you’re looking for a direct link to Captain American – You can pick him up at Hallmark for $6.95.

For The Walking Dead Fan

Atlanta Movie Tours – Carrie Sagel Burns and Patti Davis, both fans of AMC’s The Walking Dead, started Atlanta Movie Tours in early 2012. Their “Big Zombie Tour” provides fans with a 3 hour walking and driving tour of all of Atlanta’s local zombie hangouts. While the locations may vary from tour to tour, fans can count on seeing locations that they recognize from Seasons 1 of The Walking Dead.

Interested in locations from later seasons? They also have a tours in Downtown Senoia (aka Woodbury) that is about an hour south of Atlanta. See the zombie arena from Season 3 to the waterfall from the Season 2 finale. In fact, fans have even been known to find bullet casings from the scenes shot at the zombie arena.

If you’re a zombie fan and you haven’t been on these tours yet – you’re missing out! Atlanta is zombie-central, and this tour is pure heaven for any fan! FanBolt absolutely loved it! Grab tickets today! 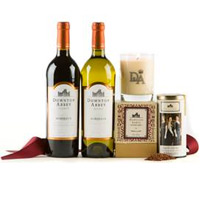 Downton Abbey Wine – Have a friend that’s a fan of Downton Abbey? It’s hard not to love the show if you’ve seen it! Fans can now recreate the Downton Abbey experience with Downton Abbey Wine. Sit down to watch an episode with one of two enticing blends from the Bordeaux region of France: a “Blanc” white wine and a “Claret” red wine. Downton Abbey Blanc is a light and crisp white blend, while Downton Abbey Claret is medium-bodied red with bright fruit and a silky finish.

FanBolt’s personal favorite? Our staff was divided half and half between the white and the red, but I personally loved the red – not too heavy but with just the amount of flavor. It pairs beautifully with Parmesan cheese if you’re looking to have a wine and cheese night the next time you watch Downton Abbey.

For The FanBolt Fan 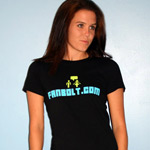 FanBolt Fan Pack – Did you know that we have FanBolt t-shirts and bumper stickers… and even a few limited edition jackets that you can pick up?

If you’re interested in showing your love for FanBolt and our fan family, drop us an email with your size (S, M, L, XL, or XXL (Ladies Fit or Regular)) and your desired item – tee or hoodie. And we’ll send one out to you along with some bumper stickers and a mouse pad for only $25 (tee) or $30 (jacket)!

Shipping is included for US residents, and if you’re located elsewhere we can still ship it to you – we’ll just need to do a little math!

Do you have plans for Valentine’s Day? Have suggestions for your fellow geek loving family? Share your comments with us below!

Have a wonderful Valentines!